Ziemer's B.C. Golf Notes: Lee plays his way on to PGA Tour Latinoamerica circuit; Nathu off to Argentina for Q-School; Macdonald oh-so-close to a 59; Hadwin, Sloan and Taylor head to Georgia for final fall season event; SFU loads up on female recruits

One of the biggest challenges for a young professional golfer is finding a place to play. Henry Lee of Coquitlam has checked off that box. Lee, a member of Golf Canada’s national amateur team, tied for sixth at a PGA Tour LatinoAmerica qualifying school in Mazatlan to earn good status for the upcoming season.

He’ll be exempt through the first re-shuffle, or roughly the first half of the new season which begins early next month with two events in Argentina and Chile.

Lee, who graduated from the University of Washington this past spring, spent the summer playing as an amateur and is now expected to turn pro.

He fired four rounds in the 60s on the Estrella del Mar course to finish the event at 11-under par. Two other British Columbians earned conditional status at the Mazatlan Q-School. Kaleb Gorbahn of Smithers tied for 19th at eight-under, while Kimberley’s Jared du Toit tied for 23rd at seven-under.

Du Toit, who won Q-School the last time it was played at Estrella del Mar in January of 2020, opened with an eight-under 63 to take the first-round lead. But he struggled to a seven-over 78 in the second round and was unable to fully recover.

HEADING SOUTH: The fourth and final PGA Tour LA Q-School goes Nov. 23-26 in Buenos Aires, Argentina, and Richmond’s Ziggy Nathu will be there. The former UBC Thunderbird figured it made sense to head to South America to try and earn his card. “Logistically, it just made more sense since the season starts there right after that with an event just outside Buenos Aires and the week after that in Chile,” Nathu said.

“I felt going down to play the Q-School right before makes the most sense for me.” Nathu likes where his game is at as he heads south. He’s had two recent wins on the Vancouver Golf Tour. “I feel like my game is in a really good place heading to Q-School,” he said. “I am pretty comfortable with my game right now. It’s a nice place to be mentally. It will also be cool to experience another part of the world I haven’t been to.” Nathu will be rooming in Argentina with the only other Canadian in the field, Carter Lewis of Calgary.

JUNIOR ALL-AMERICANS: Vancouver’s Michelle Liu has been named as a first-team 2021 Rolex Junior All-American by the American Junior Golf Association. Liu won two AJGA events this past summer, including the Mariah Stackhouse Invitational at Stanford University. Surrey’s Lauren Kim, also a two-time AGJA winner this summer, was selected an honourable mention All-American. Kim and Liu have both received invitations to play in the AJGA Rolex Tournament of Champions, which goes Nov. 20-25 at the PGA National Resort in Palm Beach Gardens, Fla.

IN THE ZONE: Funny story from Vancouver’s Stuart Macdonald, the Korn Ferry Tour regular who was competing on the West Florida Golf Tour last week. After shooting a one-over 73 in the opening round of the 36-hole event, Macdonald got it going in the second round. Turns out he was playing even better than he had imagined. Macdonald shot a course record 60 at Lakewood Ranch Golf & Country Club in Lakewood Ranch, Fla., and didn’t even realize he had a chance to shoot a 59.

“Kinda lost track and had a 25-footer on the last for 59 and didn’t even know it,” Macdonald said on Twitter of his round that included 10 birdies and an eagle. Macdonald tied for fifth at the Lakewood Ranch Open and made $950. He has full status on the 2022 Korn Ferry Tour, which begins its new season in mid-January with two events in the Bahamas.

CLEANING UP: Michael Mather, the longtime general manager of University Golf Club in Vancouver, was at home enjoying some time with his family when he got the call from one of his pro shop employees. Mather couldn’t quite believe what he was hearing. “My phone rang about 6 o’clock (on Saturday, Nov. 6) and he said, ‘Mike has anyone called you?’ “ Mather recalled. “I said, no what’s up, and he said ‘a tornado just hit us.’ And I was like, what?!” 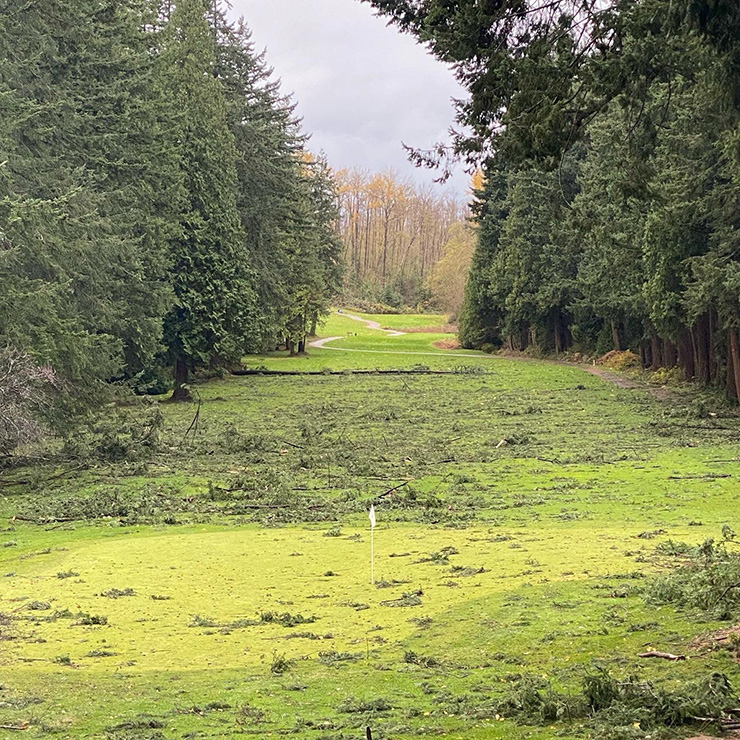 The tornado did most of its damage to the early holes on the front nine as well as the 10th tee. Mather said course superintendent Phil Bunting and his crew, along with some help from pro shop and driving range staff, have done superb work in cleaning up the course. The club was able to re-open its back nine on Nov. 10, but Mather does not anticipate having the front nine ready for play until the weekend of Nov. 20-21. “It could have been a lot worse,” Mather said. “Again, the main thing is no one got hurt. Fortunately, it happened right at the end of the day and there weren’t a ton of people around.”

GEORGIA ON THEIR MINDS: Abbotsford’s Nick Taylor closed with a two-under 68 and tied for 41st at two-over par at the Hewlett Packard Enterprise Houston Open. That was 12 shots behind winner Jason Kokrak. Taylor earned $28,125. Merritt’s Roger Sloan, now a Houston-area resident, and Adam Svensson of Surrey both missed the cut. The final full-field event of the fall season goes this week in Sea Island, Ga. Taylor is taking the week off, but Sloan, Svensson and Abbotsford’s Adam Hadwin are all in the field for the RSM Classic, where Robert Streb is the defending champion.

SFU RECRUITS: Chloe Tran and Sueah Park, who are teammates on the Walnut Grove Secondary golf team in Langley, will play their collegiate golf together at Simon Fraser University. Tran and Park are among five new recruits to the women’s team signed last week by Simon Fraser golf coach Matt Steinbach. Izzy Ferguson of Ottawa, Meera Minhas of Burnaby and Anaya Bhandai of Surrey will also join Simon Fraser in the fall of 2022.

“This group will help the women’s team return to their form as 2020 SFU President’s Team of the Year, and they will build the foundation to sustain SFU women’s golf as an annual NCAA Championship contending team,” Steinbach said. “These students will create a core foundation and culture of excelling in the classroom, in the community and on the golf course.” Steinbach also added one recruit to his men’s team. Aneesh Kaura of Calgary, the No. 1 ranked golfer from Alberta on the Maple Leaf Junior Golf Tour, will join Simon Fraser next fall.

“We were very selective with who we wanted to join the team, and Aneesh was the only player to whom we ended up making an offer,” Steinbach said. “We were looking for someone who could have an immediate impact with our team while also blending well with an older group of guys.”

INDIANA WANTS HER: Surrey’s Angela Arora, the 2020 B.C. Junior Girls champion and a member of Golf Canada’s national junior team, has committed to Indiana University. She’ll join the Hoosiers program, where Delta’s Mary Parsons has spent the past four years, in the fall of 2022. Kent State University made official last week what we reported several months ago: Victoria’s Willy Bishop, the 2020 B.C. Junior Boys champion, will be joining the Ohio school’s golf program next fall.

CHIP SHOTS: Ian Kim of Surrey shot a three-under 69 and won a Vancouver Golf Tour one-day event at Pagoda Ridge in Langley. . . Here’s a reminder that the active scoring season ended Nov. 15 in British Columbia. Enjoy your off-season golf, everyone.