BC Courses In Recovery After Major Storms 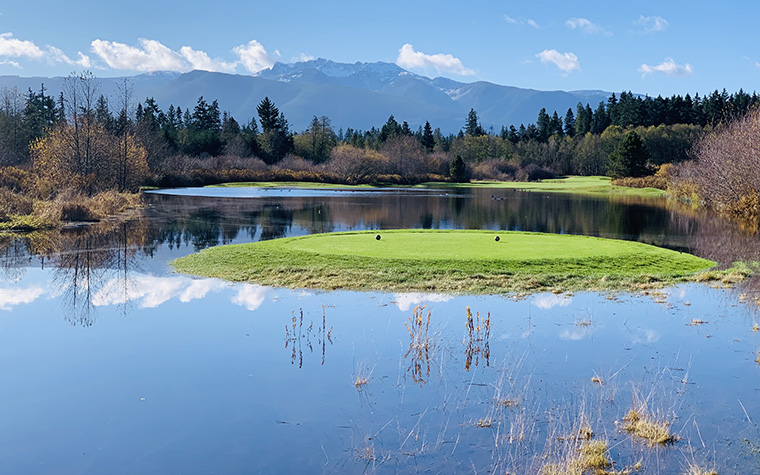 No, It's Not An Island Green - It's The First Tee At Pheasant Glen GC On Vancouver Island - Photo Courtesy Michael Cunningham

(Reposted With Permission From The PGA of British Columbia)

RICHMOND, BC (PGA of British Columbia) -- Just two weeks into his new role as Chilliwack Golf Club’s Superintendent, Kaleb Fisher never could have expected a challenge like the one his facility is facing after the extreme weather events that have hit southern British Columbia in recent days.

First, there was a rare tornado on Nov. 6 that left University Golf Club a mess with trees and branches down across the golf course.

But many more facilities on Vancouver Island, the Lower Mainland and in the Fraser Valley are also now in recovery mode after an “atmospheric river” event brought more than 200 millimetres of rainfall between Saturday and Monday, plus winds gusting up to 90 kilometres per hour, leading to floods, mudslides and countless transportation links closed between BC communities.

PGA of BC Apprentice Professional and Chilliwack Golf Club superintendent Kaleb Fisher stands on the third-hole teebox at his facility with the fourth green behind him on Tuesday morning, showing the water that has accumulated on course following storms that brought widespread flooding to the Fraser Valley - PGA of BC Photo

“I haven’t seen anything like this, and I don’t know that there’s a real recipe for having to deal with acts of God,” said Fisher, a PGA of BC Apprentice Professional and one of few PGA of Canada members working on the course maintenance side.

“Mother Nature has a way of making us feel small, that’s for sure.”

Chilliwack Golf Club is among many courses under water in the Fraser Valley and dealing with debris scattered by high winds. Speaking with the PGA of BC administration team Tuesday morning in the aftermath of the storm, Fisher said the first priority was assessing whether it was safe to bring his staff back to begin cleanup efforts, as well as starting to pump water out of low-lying areas where possible.

“The problem that we’re running into now is that half of the golf course is virtually untouchable with the water levels the way they are,” Fisher explained. “They’ve probably risen, if I had to guess, 10 to 12 feet in the last three days.”

Fisher –- who was just introduced as the club's Superintendent earlier this month after one season in an assistant role –- added that he’s actually expecting water levels to keep rising through Tuesday evening and early Wednesday.

“We’ve got some stakes out there and paint marks and are just monitoring more than anything right now,” he said. “(Until it’s) deemed to be kind of over and done with, it’s a bit of a waiting issue in Chilliwack here and all of the pumps are trying to keep up pushing water into the Vedder Canal, but unfortunately those pumps are struggling to keep up right now. We’re kind of at the mercy of everything.”

University Golf Club Head Professional Steve Liddicoat said the past 72 hours have been “a bit of a step backwards” for the facility as it was already working to mitigate the damage from the previous week’s tornado. Though the back nine was reopened for play last week following initial cleanup work, the entire course was closed again Tuesday after sections of the course were inundated with water.

“(The tornado) wasn’t like a normal storm where you get small branches that you can just blow away with a blower. We had four-to-six-inch branches coming off the trees, so that required a lot of work with the chipper,” said Liddicoat.

“Most of the course was cleaned up. We just had the parking lot and hole No. 4 left to do. Then yesterday hit.”

Liddicoat said water pooling in the low areas of the back nine have created a lake on the 13th hole that will take some time to drain off. But after seeing how some courses east of Vancouver are completely flooded, he noted that the situation at his facility now seems somewhat minor in comparison. The club is hopeful to have the full course back open again in the days ahead.

“I’m sure some courses are much more affected than us now from the rain,” he said. “Most of our damage is just superficial and we don’t have anything that’s going to require reconstruction. To a point, we’re fairly lucky. It’s just going to take some time for us to get debris cleared.”

Thankfully, the situation isn’t as dire everywhere. Victoria’s Royal Colwood Golf Club closed for play Monday and shared incredible images to its social-media channels depicting large sections of the course under water. However, Head Professional Rich Chlopan said conditions improved quickly enough for the club to welcome its members back for play Tuesday.

“This might sound really ridiculous, but you wouldn’t event know there was a storm here yesterday, other than some branches that are down and a little bit of wind damage to the trees,” Chlopan said Tuesday morning. “The golf course has fared well, but that’s the property here, too. It’s always drained well and been able to recover quickly.

“We have about 125 on the sheet today and we’re going to continue going forward.”

Though the outlook in the days ahead will be challenging at many facilities, Fisher pointed out that the events of the past several days have served as a great reminder of how the golf community is so tightly knit.

“The industry is so cool in that respect – it’s one big family and everybody’s trying to make sure everyone has what they need to get through this little bit here. The support’s been fantastic,” he said.

“I’ve sent some tweets out and everybody’s been really interested and engaged in what’s going on – hoping that everybody’s staying safe and that the golf course is going to be OK. At the end of the day, that’s what we’re trying to do: Have a beautiful golf course for our members and guests to enjoy 12 months of the year.” 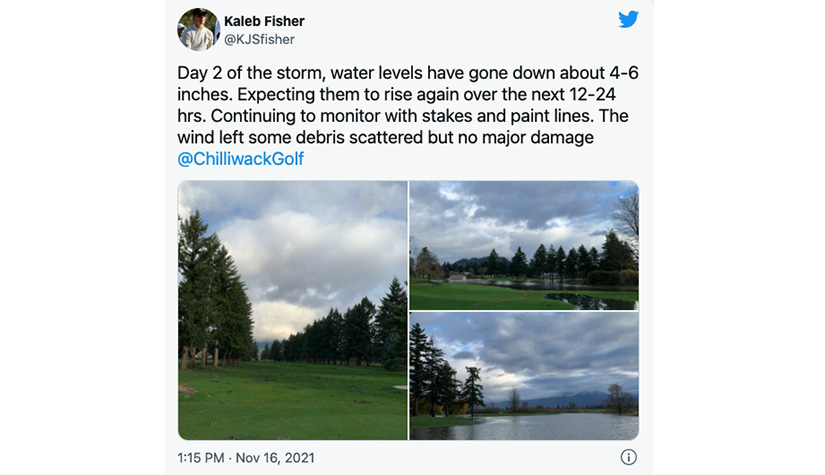 Liddicoat said the experience has been the same at University Golf Club, with many from across the industry reaching out to express their support and with staff members between departments at the club leaning on each other to get through a difficult stretch.

“When we (initially) had the full golf course closed, my golf operations team was out on course raking branches and chipping logs and cutting stuff up to help the greens crew out,” he said. “So as a facility, it’s been sort of a team-building experience that was very unplanned. I think it’s been good for both departments to see how everyone’s willing to help out when they’re in need.”

The past week has also served to make the 2021 season an even more memorable one, after a year that has seen BC facilities deal with extreme heat, wildfires and smoke, continued challenges related to COVID-19 and tee-sheet demand not seen in decades.

“The highs have been so incredibly high, we’re busier than we’ve been since the early 2000s … and on that end it’s just been an incredible high and a fun roller coaster to be on. But the lows have been crushing. It seems to be a very yin-and-yang season,” said Liddicoat.

“Just to see everyone willing to help everyone out when they’re in a time of need. It’s been pretty touching to have everyone – even suppliers we don’t deal with – reaching out to say ‘If you need anything, I’m here for you.’ It’s been a humbling week and definitely not something we’re going to forget anytime in the near future.”