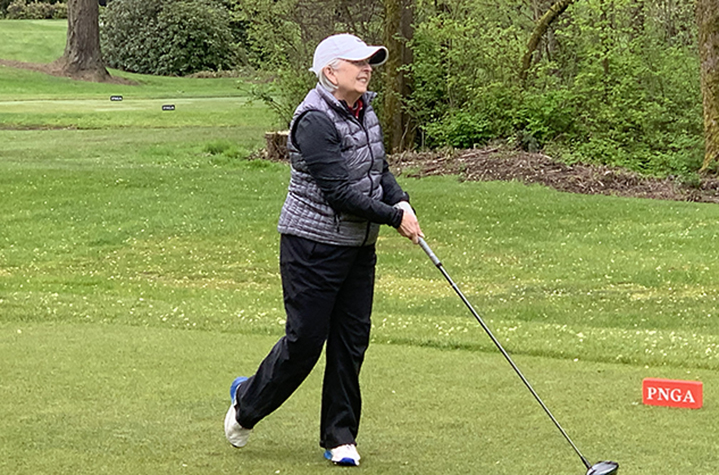 Little and Stouffer won both of their matches in convincing fashion after something of a scare just prior to their morning four-ball match. That’s when a cart attendant plowed into Little’s push cart, which then banged her and sent the British Columbia Golf Hall of Famer flying into a rock wall.

Little, who now lives in the small Kootenay community of Procter, played both matches with a sore lower back, but you never would have known it.

She and Stouffer, who resides in Nanoose Bay, won their four-ball match 5&4 and then took their afternoon foursomes (alternate-shot) match 6&5 to get Team B.C. two points in the Ryder Cup style competition which also features teams from the Washington, Oregon and Idaho golf associations.

“The back is quite sore,” Little said after her second match. “But we’re doing okay.” Little was struck just moments before her morning round began. She said she looked up and saw a cart come around the corner near the 10th tee. She jumped to get out of the way, but the cart slammed into her push cart. “My cart then slammed into me and I went flying into that rock wall,” she said.

“Her hat flew off, her bag came off the cart, it was quite an impact,” added Stouffer. The Lamey Cup has resumed after being cancelled the past two years due to Covid-19.

Washington, the defending champion, is off to fast start. They lead after Day 1 with 10 points, followed by Oregon with seven, B.C. with five and Idaho with two. The competition concludes Thursday with 12 singles matches. B.C.’s other point in the afternoon foursomes matches came from Christina Porteau of Port Alberni and Nonie Marler of Vancouver, who won their match 6&5.

B.C. earned three points from the morning four-ball matches. Little and Stouffer won their match 5&4 over the Washington duo of Leslie Folsom and Carrie Jacobson. Saare Adams of Victoria and Brent Wilson of Cobble Hill won their match 2&1 over Oregon’s Daniel Snoey and Robbie Ziegler.

Norm Bradley of Kelowna and Mike Kennedy of North Vancouver halved their match with Idaho’s Jason Dobis and Scott Vermeer. Mike Aizawa of Richmond and Nasheel Kassam of Vancouver earned a halve in their match with Oregon’s Harrison Moir and Taylor Klopp.