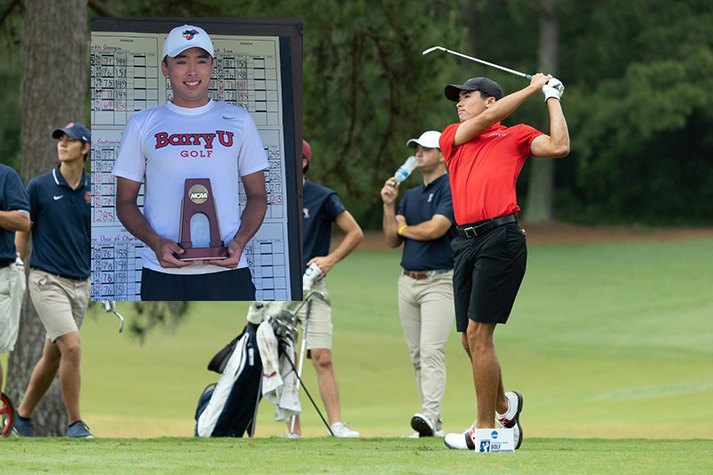 A.J. Ewart is the top-ranked player in NCAA Division II golf and the Coquitlam native keeps showing us why.

Ewart won again, in most impressive fashion, at the NCAA South/Southeast Regional tourney in Valdosta, Ga. Ewart, a junior at Barry University in south Florida, closed with a six-under 66 on what was his 23rd birthday (on May 7) and beat the field by six shots with a 54-hole total of 13-under par.

Ewart closed out his round in style as he eagled both of the par 5s on the back nine of Kinderlou Forest Golf Club. The first eagle came via a three-foot putt, while he chipped for the next one. Ewart followed that up with another chip-in for birdie on the next hole.

It was the fifth win of the season for Ewart, who has also lost two playoffs. His play at the regionals helped Barry to a second-place finish in the team competition and move them onto the NCAA Division II Championship tourney, which goes May 16-20 at TPC Michigan in Dearborn, Mich.

Ewart stands second in the current Golfstat Cup standings. His stroke average of 69.48 this season is second only to Texas A&M’s Sam Bennett (69.42) in all of U.S. college golf.

A NEW SEASON: The three Whistler courses open their season this week and all signs are pointing to it being another good one. “The numbers look really good and I don’t think the golf vibe is fading at all,” says longtime Whistler Golf Club general manager Allan Kristmanson. “All indications are that it is going to be a good year. But like everybody, we are in the weather game. People like to play golf in the sun, so if the weather is nice we’ll be smokin’ busy and if it’s challenging I think we’ll still be busy.”

Whistler Golf Club is scheduled for a May 12 opening, while Chateau Whistler and Nicklaus North are both opening on May 13. Kristmanson acknowledges the unseasonably cool start to our spring has been a challenge. “The thing that is unique for us is that we haven’t had snow on the ground for eight or 10 weeks,” he said. “We thought maybe we’d be opening early, but spring just hasn’t come. But we’re cutting grass now and things are looking up. It looks like we’ve got some better weather coming.”

BOUNCE BACK: Abbotsford’s Nick Taylor rebounded nicely after three straight missed cuts with a tie for 15th at the Wells Fargo Championship at TPC Potomac at Avenel Farm. Taylor finished the event at one-under par, seven shots behind winner Max Homa. The top-15 finish moved Taylor up 19 spots to 102nd on the FedEx Cup points list. He earned $141,750. Surrey’s Adam Svensson and Roger Sloan of Merritt both missed the cut. The tour heads to the Dallas area for this week’s AT&T Byron Nelson tourney, where Abbotsford’s Adam Hadwin will return to action after a two-week break. Taylor, Sloan and Svensson are also in the field.

BOGEY-FREE: Coquitlam’s Henry Lee closed with a bogey-free three-under 69 and tied for 38th at the PGA Tour Latinoamerica’s Quito Open in Ecuador. Lee completed the event at seven-under par, 15 shots behind winner Manav Shaw of the United States.Richmond’s Ziggy Nathu missed the cut by one shot. The next event PGALA event goes May 26-29 in Guadalajara, Mexico.

SEASON OVER: Simon Fraser University’s men’s team completed its season with a 19th place finish at the NCAA Division II West/South Central Regional tourney in Pueblo, Colo. Bailey Bjornson led SFU with a tie for 50th finish at three-over par. Jordan Bean and Ryan Stolys both closed nicely for SFU, shooting two-under 69s. Both players had seven birdies in their final round.

ON TO NATIONALS: The University of Victoria men’s and women’s golf teams swept the team titles at the Continental Athletic Conference Championships in Burlington, Iowa, to advance to their respective NAIA national championship tourney. The men’s nationals go May 17-20 in Silvis, Ill., while the women’s national tourney will be played May 24-27 in Oklahoma City. The University of B.C.’s men’s and women’s teams have also advanced to the NAIA Championships.

MAC ATTACK: West Vancouver’s Jennifer Gu, who is completing her first year at Kent State University in Ohio, has been selected Mid-American Conference freshman of the year. Gu, last year’s B.C. Junior Girls champion, is part of a truly international team at Kent State. Her five teammates hail from the Netherlands, Spain, Thailand, England and France. Kent State, which won its conference championship, has advanced to this week’s NCAA Regional tourney in Franklin, Tenn.

NICE WORK: UBC’s Sonja Tang had a great result at the PGA WORKS Collegiate Championship in Philadelphia. Tang, a Victoria native who is completing her first year at UBC, finished solo third at six-over par after firing rounds of 69, 76, and 75 at UnIon League Golf Club. Fellow Thunderbird Emily Li tied for 12th. The PGA WORKS tournament was created in 1986 to highlight competitive golf programs at the most underserved and underrepresented minority-serving institutions.

It is considered the most culturally significant championship in collegiate golf. UBC did not compete as a team at the tournament, but Tang and Li competed as individuals. Former Thunderbird Ziggy Nathu of Richmond, who is now playing on the PGA Tour Latinoamerica circuit, won the 2019 PGA WORKS individual title.

That was two shots better than runner-up Maxwell Sear of Royal Colwood. Only one round in the 60s was recorded. That came from third-place finisher Khan Lee of Meadow Gardens, who opened with a 69. Rowe earned $3,500 for the win and an exemption into the $125,000 Canada Cup tourney this summer in Victoriaville, Que.