She’s a senior golfer now, but Shelly Stouffer likes her chances as she prepares to tee it up with the ‘kids’ at the B.C. Mid-Amateur Championship at Talking Rock Golf Course.

Stouffer, the reigning B.C. and Canadian Senior Women’s champion, has never laid eyes on Talking Rock. But these days, her golf game is travelling well. She’s never felt more confident about her swing.

“I am feeling pretty good,” Stouffer says. “I like my chances. I don’t know if I have ever hit it this well. I have hit it farther before, but not as consistently straight and in play all the time. I feel like my swing is a lot better than it has been. And I am putting well. It’s great. I love where my game is at. I am just much more consistent.”

The Men’s and Women’s Mid-Amateur Championships tee off the 2022 championship season for British Columbia Golf and will be played May 17-19 at Talking Rock in Chase. The Mid-Am is open to players aged 25 and older. Players 40 and older are also eligible for the Mid-Master Championship, which will also be contested at Talking Rock.

“I haven’t played it before, but I have heard lots of good things about it,” the 52-year-old Stouffer says of Talking Rock.

Stouffer knows that her game will need to be sharp to beat a field that includes defending champion Jessica Claggett of West Kelowna, 2020 Mid-Am champion Nonie Marler of Vancouver and multiple past champions Jackie Little of Procter and Christina Spence Proteau of Port Alberni.

Stouffer’s home course is Fairwinds in Nanoose Bay and she feels playing it regularly has been good preparation for a tree-lined layout like Talking Rock. “Fairwinds is tight and I feel like because I play at Fairwinds and can hit driver there, I can hit it anywhere,” says Stouffer, who will try to win her third straight B.C. Senior Women’s Championship later this month at Fairwinds.

The last time Stouffer played in the B.C. Mid-Amateur she won it. That was in 2019 at Ledgeview Golf Club in Abbotsford. She feels like she’s playing better now than she was then, thanks in part to a commitment to get in better physical shape. 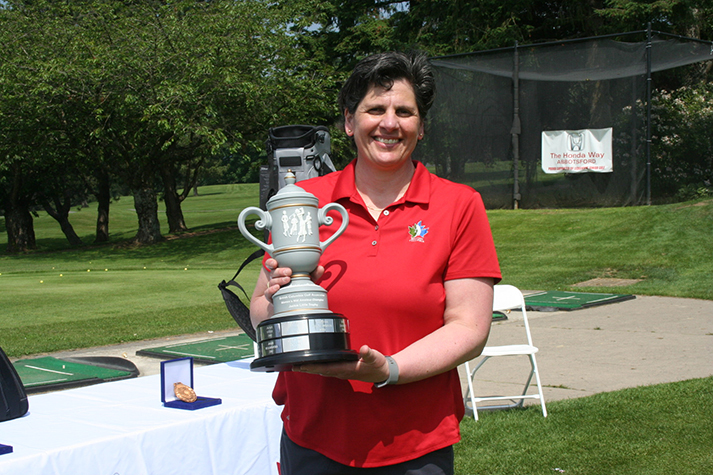 Shelly Stouffer With Her Trophy At The 2019 B.C. Mid-Amateur At Ledgeview GC

On the men’s side, defending champion Craig Doell of Victoria will face a deep field as he tries to win his fourth B.C. Mid-Am. Doell won last year’s championship at Gorge Vale Golf Club in Victoria, where he beat John Robertson of Courtenay by three shots.

Robertson is in the field at Talking Rock, along with several other players who must be considered serious contenders, including Mike Aizawa of Richmond, Nasheel Kassam of West Kelowna, Jay Snyder of Vancouver and Patrick Weeks of Vancouver.

Doell has some familiarity with Talking Rock, having played the course when it played host to the Mid-Amateur Championship in 2015. The final round of that tournament was washed out due to heavy rain. “I quite liked the golf course,” Doell says. “It’s a nice layout with quite a number of good holes. Most of it is right in front of you. There are a couple of uphill holes and there’s a bit of terrain to deal with.”

Doell likes where his game is at. He just missed qualifying for the U.S. Senior Open by two shots at a May 9 qualifier in Portland and has been getting plenty of rounds in at his home course, Victoria Golf Club, where he is the new club president.

Located on the shores of Little Shuswap Lake and owned by the Little Shuswap band, Talking Rock has continued to grow in stature since opening 15 years ago. It is now regarded by many as one of the top resort courses in the province. While tree-lined, the course is not overly tight.

“I think it’s a very fair test and a fair course,” says director of golf Nathan Grieve. “There’s nothing quirky about it. It’s all kind of right in front of you. It’s tree-lined, but it is still forgiving. It is wide enough off the tee that you can work the ball either way on most holes. “But it is still always challenging. It’s not overly long, but there’s a lot of driver holes and the par 3s are key. If you can play the four par 3s well you usually have a chance for a good score.” 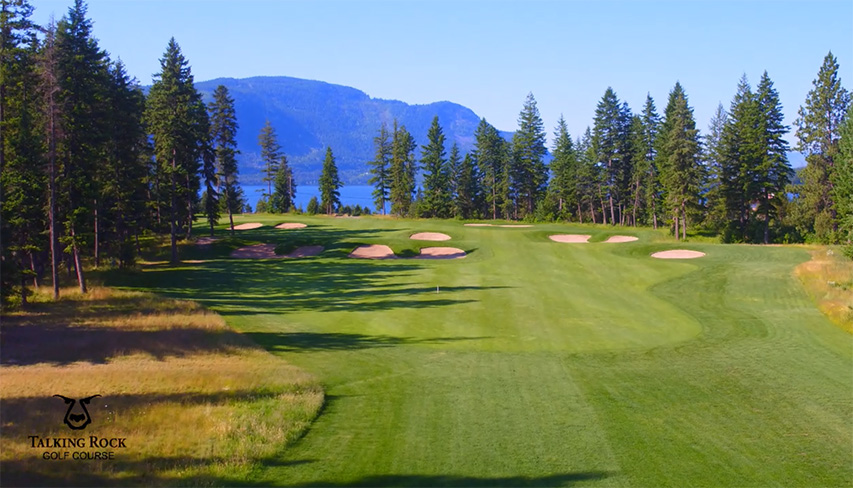 A key hole could be the short par 4 17th. It measures just over 300 yards from the tips but can be moved forward to make it drivable for some players. “There are a couple of greenside bunkers,” Grieve says. “So to get it on the green is tough, but I’m sure some guys will have a go at it.”

The par 4 18th, which runs right along the lake, has to rank as one of B.C. prettiest finishing holes. Grieve says longtime superintendent Daryl Adama and his crew have the course in great condition.

“It is in fantastic shape,” Grieve said. “It wintered really well and we moved up our aeration because of the Mid-Am. The one thing about the rain that we’ve had, along with some sunny days, is that it is just starting to pop. It’s in really good shape, so the best players should win.”