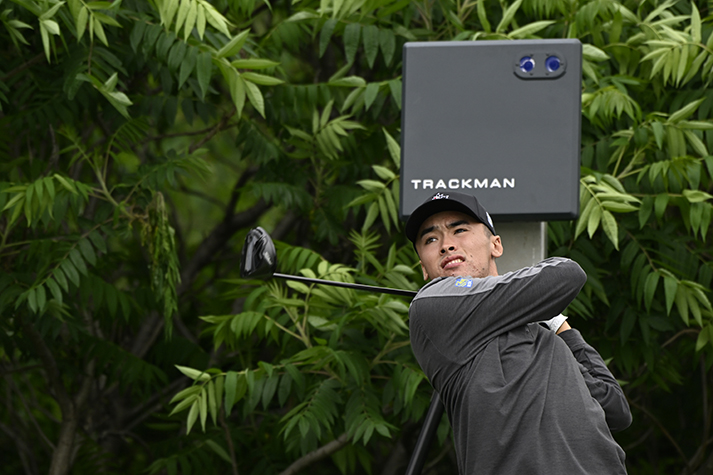 Coquitlam, BC's A.J. Ewart Was One Of 8 Canadians Who Made Their PGA TOUR Debut At This Year's RBC Canadian Open - Image Credit Bernard Brault/Golf Canada

It’s only natural to be a little nervous before hitting your opening tee shot in your first PGA TOUR event. It intensifies when it also happens to be your National Open championship.

With so many new things happening around you it’s hard to keep your focus.

Changing your shoes in the same locker room as Rory McIlroy and Justin Thomas is as cool as it is exciting. The adrenaline begins pumping when you get to the driving range and the balls are new Titleist ProV1’s. And as you walk to your stall you pass Scottie Scheffler and Cameron Smith hitting balls and getting ready. That's just plain cool as well.

The golfer who sinks the most putts often wins and the practice green gets a full workout from every player in the field. There’s a pro at every cup working through a process of alignment, distance and direction. Successful PGA TOUR players spend a good portion of their career on the practice putting green.

“Some of these greens have so much slope I don’t think they can go much faster,” explained Abbotsford, BC's Adam Hadwin. “Some of these pin positions are pretty dicey at best. If you get in some tough spots, you’ve got to grind.”

The crowds at the RBC Canadian Open grow bigger every day. Organizers expected 46,000 people on the weekend. To make the cut and play 72-holes with the best golfers in the world is every player’s goal. The 36-hole cut for this year’s tournament was one-over par (+1).

“It puts a premium on ball striking,” explained Thomas. “Controlling your distance and controlling where you are.”

“If you are not in position, it can bite you,” said Ontario's Corey Conners. “The rough is really thick and penalizing. They had some really tricky pin positions out there so I found it hard to make birdies.”

This past week St. George’s Golf & Country Club played to a par 70 and measured 7,014 yards. It played tough. The narrow, tree-lined fairways proved difficult to hit. The first two days of the tournament the swirling wind created havoc. A tee shot just a little off line would find one of three cuts of nasty, thick, wet rough.

Often the only option was to hack it out of the deep grass and back into play. Most shots hit into the long, third cut of gnarly rough could not be hit onto the green. It was either too deep to get the club face on the ball or it would come out hot and rolling without spin. Some areas of the rough were so deep one couldn’t find a soccer ball if it was kicked in there.

There were a few more distractions to the player's zone of concentration. “Quiet Please!,” yelled a volunteer. “Stand Please!” But often people don’t stop talking or moving. Bleachers surrounded many of the tees and greens and were a great place to watch golf from, but when people walked on the aluminum structures they would creak and burp and make a lot of noise.

The sun finally came out and it got hot. Cold beer and canned Vodka Caesars seemed to be the popular choice of the party animals. New-to-the-game or non-golfers often don’t know they're expected to be somewhat quieter when watching golf. While watching golf, tradition has dictated that you should pretend you are in the library and not at the zoo. The noice is just one more element the golfers need to try and block out.

Did I mention the TV cameras? Every player, on every hole and every shot is now recorded on video at every tournament. That’s because people can gamble on every shot hit on the PGA TOUR. Thus a camera needs to be on every player in the field to guarantee no rule violations.

You have to somehow forget about the TV cameras. Block out the noise. Calm your nerves and get the ball on the tee while your hands are shaking. You’re nervous and it’s time to begin some deep breathing exercises.

This RBC Canadian Open week the party was full blast at ‘The Rink’ on the 16th hole. The tee box was surrounded by sponsor-covered rink boards with goalie helmets as markers. After every shot the fans would bang the boards and yell and scream as if it was Maple Leaf Gardens. The entire hole, an uphill 204-yard par three was completely surrounded by corporate sky boxes overflowing with exuberant, cheering fans.

And there are evn more distractions that PGA TOUR players-in-training must get used to. Now that they are gaining notoriety, demands will be put on their time. People want things. Signing autographs, doing interviews and attending functions are part of the job description. Family and friends there to cheer on the player unknowingly place demands on the player that can take away from their task at hand. 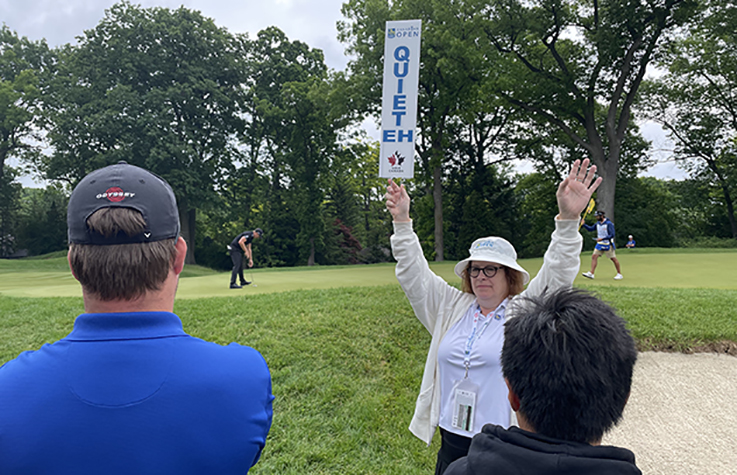 A Volunteer Holds Up The Very Canadian Sign of 'Quiet...EH' At The RBC Canadian Open

Dreams became reality for a group of eight, deserving young Canadians at the RBC Canadian Open. Every player’s path to their first PGA TOUR event was different. Three B.C. golfers including Callum Davison, Stuart MacDonald and A.J. Ewart all earned the chance to play against some of the game’s best. Other Canadians in the 156-player field included: Max Sekulic, Myles Creighton, Aaron Cockerill, Brendan Leonard and Johnny Travale.

Davison earned his spot in the field after winning the 2021 McKenzie Tour Order-of-Merit. Davison turned professional immediately after graduating from high school in Duncan, B.C. He packed his suitcase and golf clubs and set off to play the European Developmental Challenge Tour before returning home to play the tour across Canada.

Coquitlam golfer A.J. Ewart was rewarded with a PGA TOUR start for his stellar college season at Barry University, Miami Fl. This past season Ewart won The Jack Nicklaus National Player-of-the-Year Award for finishing as the No.1 ranked player in NCAA Division II. Ewart, a member of Golf Canada’s National Team, finished first in seven college tournaments this year. 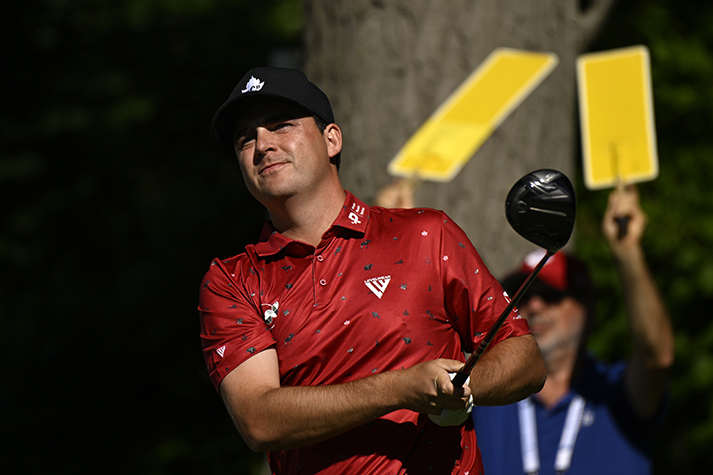 Cambridge's Leonard, 30, earned his spot at St. George’s by winning a 4-hole playoff in a qualifier held at TPC Toronto at Osprey Valley, while Johnny Travale from Stoney Creek, ON, who received an invitation as a member of Canada's National Amateur Team, rounded out the list of eight Canadian PGA TOUR rookies teeing it up at St. George’s this past week.

Meanwhile, Aaron Cockerill, from Stony Mountain, MB, chose his path to the PGA TOUR through Europe and sits 42nd on the DP World Tour rankings. Cockerill was the only Canadian among the group to make the 36-hole cut and eventually finished T48 at even par for the tournament.

The young golfers who played at St. George’s Golf & Country Club in Toronto are the the next generation of Canadian PGA TOUR players. The ones who learned from this week’s opportunity and experience are the golfers who will turn it into a successful career.

For most golfers, playing a PGA TOUR event will always be just a dream. But for some who put in the time and effort - dreams can come true.