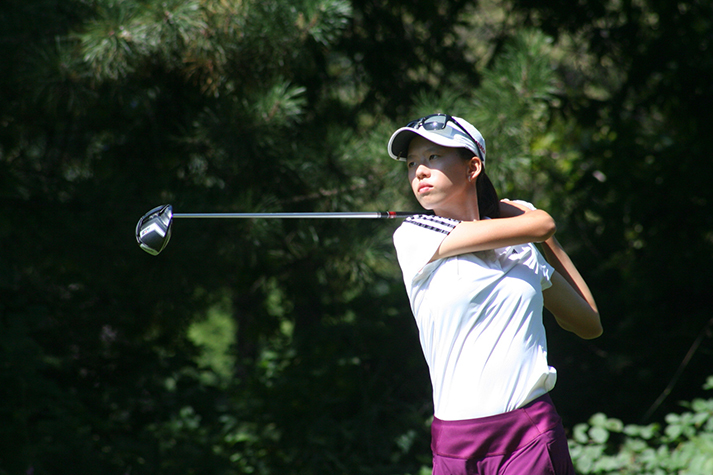 PITT MEADOWS -- Luna Lu felt right at home and it showed in Tuesday’s first round of the B.C. Women’s Amateur Championship at Pitt Meadows Golf Club.

The 15-year-old Burnaby resident has been a junior member at Pitt Meadows for the past three years and knows the course well. She put that local knowledge to good use and fired a four-under 69 that gave her first-round lead. “It is certainly more comfortable than going to a course out of my city,” Lu said. “I feel more at ease.”

Lu, who is just finishing Grade 9 at Burnaby North Secondary, had six birdies and a pair of bogeys in her round.

“I think it was a pretty solid round,” said Lu, who won last year’s B.C. Juvenile Girls Championship played up the road at Golden Eagle Golf Club. “I made some nice birdie putts, but I could have chipped a little bit better.

Lu finished her round with a two-putt birdie on the par 5 18th hole, despite driving it into the right rough. “I had 210 (yards) and I used my 5-wood to get it on,” she said.  Lu figures she’ll need a bunch more birdies to claim the championship on Friday. “It’s probably going to take double figures under par to win,” she said.

Lu is a member of Golf Canada’s junior team and she has one of her national teammates chasing her at Pitt Meadows. Martina Yu of Coquitlam opened with a three-under 70 and is alone in second place. She had to do some serious scrambling early in her round.

“Overall, I feel pretty good about the round,” said Yu, a 16-year-old Grade 10 student at Pinetree Secondary in Coquitlam. “I didn’t hit a lot of greens in regulation on the front. I had three, I think. I was scrambling a lot and made some nice up and downs. On the back nine I hit all the greens. I was really happy about that. It makes the game so much easier. I wish I could do it every round.”

Defending champion Leah John of Vancouver is in a group of six players tied for third at two-under par. She finished her round with two birdies. “It was a nice finish,” John said. “I started off a bit like a light switch. I was on, off, on off. I was happy with today, it was a good round. These greens are so small that if you just hit the middle of them you will be in tight anyways.”

John recently completed her junior year at the University of Nevada during which she won her first collegiate event. This past weekend she finished third at the Glencoe Invitational in Calgary.

She said she’s treating this week’s four-round event like a marathon, not a sprint. “I have some stuff to work on and think about tomorrow, but I am happy with today,” John said. “I just want to tee it up for the next couple of days. So much golf happens in four days. The first couple of days I just try to position myself in a good spot and turn it up as the days go on.”

Victoria Liu of Vancouver, Sonja Tang of Victoria, Elaine Liu of Vancouver, Ha Young Chang of Surrey are all tied with John at two-under par with Abby Chow of Coquitlam and West Vancouver's Jennifer Gu one further back at minus one.

CHIP SHOTS: Burnaby’s Katherine Hao eagled the par 4 eighth hole Tuesday. “I had 163 yards and used my hybrid because it was a bit into the wind,” she said. “It landed just short and then it rolled up.” Hao shot an even- par 73.