Sloan needs an even bigger finish this week as he returns to the Wyndham, where he lost in a six-man playoff and tied for second last year. That finish moved him from 131st on the points list to 92nd, got him into the playoffs and secured his exempt status for this past season.

Sloan enters this week’s event in Greensboro, N.C., in even more desperate straits than he was a year ago.

He’s 164th on the FedEx Cup points list that has been adjusted to remove the defectors to the LIV Tour and needs to finish solo second or better to move inside the top 125.

If Sloan can’t crack the top 125 it’s important that he move inside the top 150. Players finishing 126th to 150th retain some status and usually draw into about a dozen events the following year.
If he fails to move inside the top 125, Sloan will have a second chance to earn an exempt card via the three-event Korn Ferry Tour Finals that begin in mid-August.

Sloan did not do much to help his cause at last week’s Rocket Mortgage Classic in Detroit. He dropped one spot on the points list despite tying for 49th. Abbotsford’s Adam Hadwin and Adam Svensson of Surrey have no such concerns. Hadwin tied for 37th in Detroit and remains 48th on the points list. He is not playing at the Wyndham.

Svensson tied for 24th in Detroit and moved up four spots to 84th. He’s playing the Wyndham in the hopes of improving his standing heading into the playoffs, which begin Aug. 11-14 with FedEx St. Jude Classic in Memphis.

Abbotsford’s Nick Taylor has much to play for at the Wyndham. After missing the cut in Detroit by one shot, Taylor fell to120th on the points list. He’s exempt through the end of next season thanks to his win at Pebble Beach in 2020, but Taylor must remain inside the top 125 to qualify for the playoffs.

RECORD ROUND: Nanoose Bay’s Shelly Stouffer fired the only sub-par round in two rounds of stroke play — a four-under par 68 in the second round — and was the second seed heading into match play at this week’s U.S. Senior Women’s Amateur Championship at Anchorage Golf Course in Alaska. Stouffer, the reigning two-time B.C. Senior Women’s champion, finished just two shots behind stroke-play medalist Lynne Cowan of Rocklin, Calif. 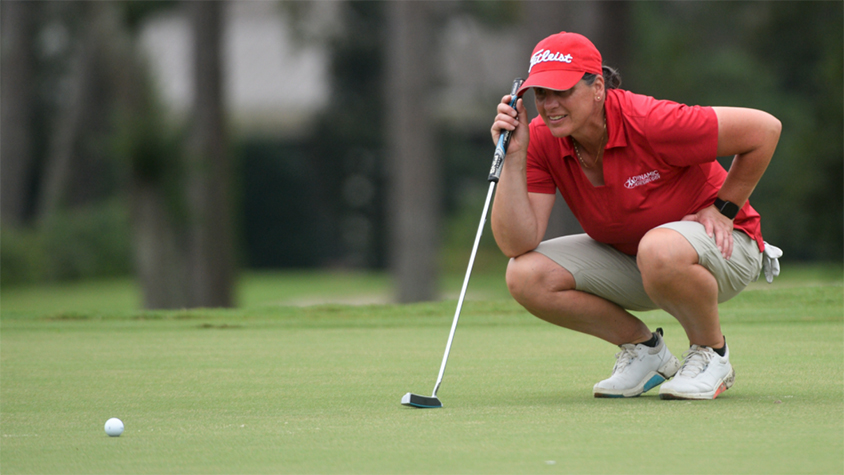 Her 68 set the competitive course record at Anchorage Golf Course. It followed an opening round of nine-over 81. “Everything was working well today,” Stouffer said after her 68. “I was hitting the ball off the tee really well. I putted well; I don’t think I had one three-putt today. I had 37 putts yesterday; not sure about today but a lot less. Stouffer lost in the semi-finals of last year’s U.S. Senior Women’s Championship. Procter’s Jackie Little also qualified for match play as the 28th seed. The other four Canadians in the field also advanced.

TOP 20: Kimberley’s Jared du Toit tied for 18th at the Sotheby’s International Realty Canada Ontario Open on the PGA Tour Canada circuit. Du Toit finished the event at six-under par. That was 11 shots behind Noah Goodwin of Corinth. Tex., who beat the field by seven shots. The PGA Tour Canada circuit heads east this week for the Quebec Open in Blainville, Que.

AMATEUR HOUR: Fourteen players earned a spot in this week’s Canadian Men’s Amateur Championship at a qualifier held at Point Grey Golf & Country Club. Brad Le Page of Abbotsford and Song Bai of Vancouver topped the field with three-under 68s. Point Grey and Seymour Golf & Country Club in North Vancouver play host to the first two rounds of the championship. The final two rounds will be played at Point Grey.

TEAM B.C.: B.C. Junior Boys champion James Lee of Whistler is among a large group of British Columbians scheduled to play in the Canadian Junior Boys Championship, which goes Aug. 7-10 at Rivershore Golf Links in Kamloops. Lee, Ryan Vest of Vernon and Ethan Posthumus of Coquitlam will represent B.C. in the inter-provincial team competition.