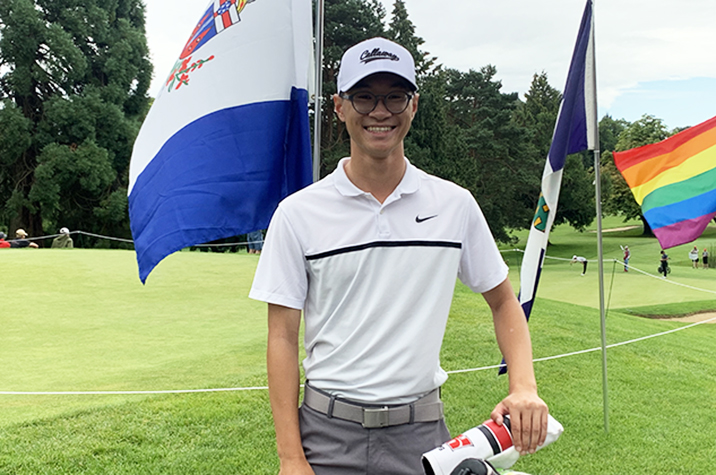 Keith Ng’s summer is almost over. In less than two weeks he’ll return to the rigors of playing collegiate golf in Hawaii. It’s a tough job, but someone’s got to do it.

“It’s hard not to like being in Hawaii,” says Ng, a Richmond native who plays at the University of Hawaii at Hilo on the Big Island. “The weather is the same, 30 degrees every day.”

Ng, who is playing well at this week’s Canadian Men’s Amateur Championship, took a rather circuitous route before landing in Hawaii. He played a year at Midland College in Texas, then transferred back home to UBC for two years.

“But with COVID it was hard to have a good travelling schedule, so that's when I was fortunate to get the transfer to Hilo,” he said. “We play a fantastic schedule and I feel like that has really helped shape my game. The coaches there have helped mature my game and helped me score a little better. We host the Amer Ari Invitational and I think we had five of the top 10 teams in the country play.

"And I had the opportunity to play Stanford’s event which was another really good learning experience. I just feel like I have learned a lot and I have been able to balance school and golf well.”

Ng enters the final round of the Canadian Amateur tied for 11th at two-under par following a rather eventful even-par 71 in the third round at Point Grey Golf & Country Club. His round was a proverbial roller-coaster and included seven birdies, five bogeys and a double-bogey.

“It’s tricky out here,” Ng said of Point Grey, a course he knows well from his Zone 4 junior days. “I had a couple of bad bounces and a couple of bad putts. I was even par, but I hit a lot of good shots. I birdied 17 and 18 which was nice.”

Ng, who has recently graduated UBC Thunderbird Shania Remandaban caddying for him this week, enters the final round tied with 13-year-old Alex Zhang of Richmond as the low British Columbians. They traiI co-leaders Eric Zhao of North York, Ont., and Robbie Latter of Mississauga, Ont., by five shots.

It’s been an eventful three days for Ng, who had a hole-in-one on Point Grey’s par 3 10th hole in Monday’s first round. “It was my second hole-in-one and both have come in Golf Canada events and both have been on the 10th hole,” Ng said with a laugh. His first ace came at a 2018 Future Links event at Bear Mountain near Victoria.

Ng credits a junior golfing friend, Dustin Franko of Delta, with helping him get a spot on the Hilo golf team. “The experience has been really good,” he said. “I kind of got lucky. They had an extra spot and I was able to transfer. Dustin is a good friend of mine and he kind of helped me get in. It was late May of last year, so I was very fortunate.”

Ng made an immediate splash by winning the first event of the season, the Sharks Shootout hosted by Hawaii Pacific University. He also won Western Washington University’s tournament last fall at Loomis Trail. “So that was fun,” Ng said. “Unfortunately, I did not have a very good spring season, but there were a lot of learning opportunities there.”

Hilo is a relatively small school with about 3,000 students. Ng shares an on campus-apartment with Franko. Another B.C. player, Junghwan Lee of Langley, also plays for Hilo. “It’s not a big school,” Ng said. “It is a tight-knit community and a strong golf community which is good.”

Their home course is the only course in Hilo -- the local municipal layout. But through an assistant coach at Hilo they also get privileges at Waikoloa Beach Golf Course and Ng and his teammates often get opportunities to play some of the other world-class courses on the Big Island. He has also tried to see as much of the island as he can.

“After our spring season Dustin and I and a few of our teammates went to South Point (also known as Ka Lae), which is the southern most part of the United States. Most people would think that’s in Florida. So we went there and went to Green Sand Beach. I think next year we are going to try and get to the top of the Mauna Kea volcano.”

Ng, 22, is majoring in psychology. He has two years of college eligibility remaining, but will graduate next spring and figures this will be his final year of college golf. “It has been a very good experience, I am very fortunate and very happy being there,” he said.

Ng, who learned the game under the tutelage of Keri Moffat and Shingo Akizuki at Mayfair Lakes in Richmond, hopes to give pro golf a try when college is done. “I think it is everyone’s dream to play pro,” he said. “There are a few hurdles to cross. I need to tighten up my game. If I do those things I would like to give it shot. I have played golf my whole life so why not give it a go.”

CHIP SHOTS: Ng is scheduled to return to Hawaii on Aug. 16, unless he gets into the U.S. Amateur Championship. He was first alternate at a qualifier last month in Washington state. . .His Hilo teammate, Dustin Franko, also made the cut at Point Grey and enters the final round tied for 32nd at two-over par. . .Coquitlam’s A.J. Ewart and Mackenzie Bickell of Richmond are tied for 17th at one-under par. . .The Canadian Amateur leaders are scheduled to tee off at 10:10 a.m. in Thursday’s final round.