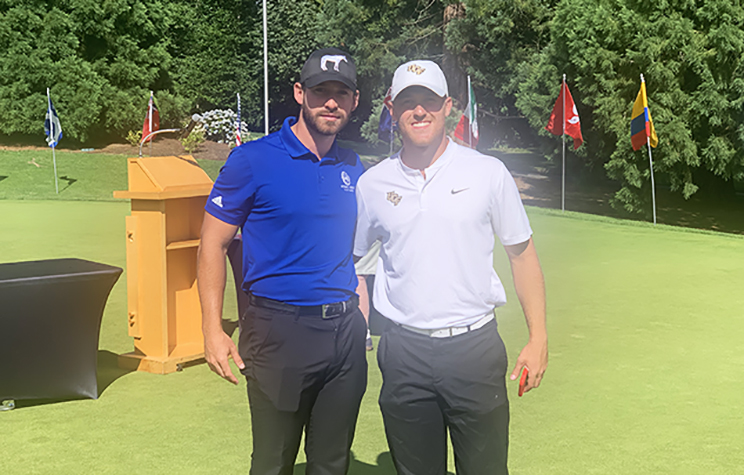 An early eagle and some help from an old friend propelled Mexico’s Luis Carrera to the biggest win of his amateur career. Carrera and Rodrigo Pena were junior golf friends who were members of the same course in Mexico City.

Neither could quite believe it when they ran into one another during the second day of the Canadian Men’s Amateur Championship at Point Grey Golf & Country Club. Carrera was in the field playing the event, while Pena had started working in the Point Grey pro shop about a month ago after moving to Vancouver recently with his Canadian wife.

On Thursday, the two old friends had a day they will never forget.

Propelled by an early eagle and with his childhood pal caddying for him, Carrera won the Canadian Amateur. Carrera was two shots behind the leaders when the final round began, so the 22-year-old knew he had work to do.

He did not waste any time. Carrera eagled the par 5 first hole at Point Grey and played a near flawless round. “I hadn’t had a good start to any of the first three rounds and I knew if I got off to a good start I would have a good chance,” Carrera said. “So that’s what I did.”

After striping his drive down the left side of the fairway, he knocked a three-iron from 240 yards to 25 feet and rolled in the putt for his three. Carrera played mistake-free golf the rest of the way. He did not make a single bogey en route to a five-under 67 that left him at 10-under for the tournament. That was good for a two-shot win over Robbie Latter of Mississauga, Ont.

“This feels amazing to win this tournament,” Carrera said. “It’s crazy. I really wanted to win it and I did it.”

It was almost as amazing as the reunion of Carrera and Pena.  When the two reconnected after Tuesday’s second round, Carrera immediately asked Pena to caddy the final two rounds for him. Pena was not available to work for the third round, but got permission to carry his friends’s bag for the final round.

“I was not sure I could caddy for him because work is first, but Dave (director of golf Dave Zibrik) and all the staff allowed me to caddy for him,” Pena said. “It was one of the best moments of my life.”

Carrera transferred to Central Florida University last season after spending three years at Sam Houston State University in Huntsville, Tex. He is Mexico’s second-ranked amateur player. Carrera separated himself from the field with a fast start to his back nine. He made eight straight pars following that early eagle and then birdied three of his first four holes on the back nine.

“I think my iron play this week was big for this week,” he said. “They were accurate and I also think I stayed patient, especially yesterday when things weren’t going well. And suddenly today the putts started to drop.”

Carrera earns a spot in this month’s U.S. Amateur Championship and will also be in the field for the 2023 RBC Canadian Open. “I am excited about that,” Carrera said of the Canadian Open exemption. “Most likely I will be a pro then. I am going to focus on my final college tournaments and getting ready to play professional golf. It is something to look forward to.”

Carrera was obviously impressed with Pena’s job as caddy as he is taking him to work for him at both the U.S. Amateur and Canadian Open. “Rodrigo did a wonderful job,” Carrera said.

British Columbia golfers were never really in contention this week. Coquitlam’s A.J. Ewart and Alex Zhang of Richmond were the top B.C. finishers. Both players tied for 13th at two-under par.

Ewart, one of the pre-tournament favorites coming off a sensational junior year at Barry University in south Florida, closed with a one-under 70. Ewart had his own cheerleading section all week as he was followed by a large group of his high school friends. “I’ve known most of them my whole life,” Ewart said. “They were here every day. I don’t think they missed a hole. It was really cool.”

Ewart could not help but be a little disappointed with his finish. “Obviously, I wanted to win it,” Ewart said. “I played in it so I could try and win it in my home city in front of friends and family, but it didn’t happen. I didn’t play terribly, but it was just a couple of mistakes every day.” Ewart will play in this month’s U.S. Amateur Championship at Oakmont Country Club in Plum, Penn.

Point Grey and co-host Seymour Golf & Country Club in North Vancouver both held up well to what was a deep field. “I think the golf course has stood up great to the caliber of the players here,” said Adam Zubek, Point Grey’s general manager and chief operating officer.

“Our golf course superintendent Tyler Patroch and his team have done just an outstanding job and we couldn’t be more proud of the quality of the course and the positive feedback we have received from all of the players and Golf Canada.”

CHIP SHOTS: Richmond’s Keith Ng and Mackenzie Bickell of Richmond tied for 27th at one-over par. . .Other British Columbians finishing inside the top 40 included Dustin Franko of Delta (T36), and Jace Minni of Delta and Taylor Durham of North Vancouver (both T38).