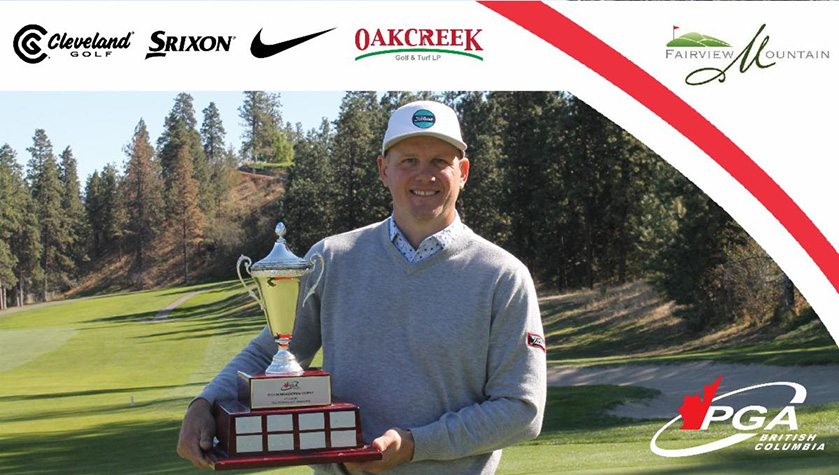 In a week that presented wind gusts of up to 50 km/h and peak-season green speeds, the Kelowna-based Head Professional overcame the elements to top a field of 45 Club Professionals to claim his second Dick Munn Memorial trophy.

Kitts’s win came in dramatic fashion as a trio of players in the final group each had their chance at victory down the closing stretch.

After the 17th hole on Tuesday’s final round, Kitts and Dave Zibrik (Point Grey Golf & Country Club) found themselves tied for the lead standing on the tee of the difficult 438-year par 4 18th. The third member of the group, host Head Professional Rob Tadey, was just one stroke back.

All players hit great tee shots and approaches into the green, with Kitts leaving himself the shortest putt of the three for birdie. Tadey was first to putt – a delicate 30-foot putt from behind the hole, with dozens of Fairview Mountain Golf Club members cheering on their Head Professional for a chance to force a playoff.

He rolled a great putt that trickled down the hill, but the ball just ran out of momentum, stopping a couple inches short of the cup. Tadey tapped in for a third-place finish, posting at even-par after rounds of 71-73. He pocketed $1,500 for his efforts.

Zibrik was next to play, having a 17-foot, left-to-right hooking putt for the lefty to take the clubhouse lead. He read the putt well, but it narrowly missed on the high-side, leaving Zibrik a tap-in for his par and now a spectator as he watched his fellow co-leader with a 15-footer for the win.

Kitts, who led for the majority of the 35-holes to that point, calmly knocked-in the uphill, right-to-left putt to claim victory in front of the gathering crowd. “It’s an honour to be able to call myself a PGA of BC CPC champion again,” said the 38-year old.

“I played really well all week. The wind was tough, golf course was in great shape but I hit it well and putted great all week. Rob and Brian (McDonald) are always so hard to beat on their own track and Dave is obviously always up there. Fairview Mountain is such a great track and it feels great to be able to win this tournament here.”

Kitts carded rounds of 70-72 to finish the tournament at 2-under par and a $2,700 payday of the nearly $15,000 total purse. He becomes only the fourth player to win multiple Club Professional Championships after he first claimed the Dick Munn Memorial trophy in 2019 at Kelowna Golf & Country Club.

Zibrik posted rounds of 73-70 - with a first round that included a quadruple bogey on the par 4 6th. He earned $2,000 for his runner-up efforts. The 2016 winner of this event now adds to a record he established last year for most consecutive runner-up results in any PGA of BC-conducted championship.

Tuesday marked his fifth consecutive second place finish in the Club Professional Championship. “I got up-and-down for birdie on 17 to give myself a chance. It was a lot of fun playing with Mark and Rob today and happy with another solid finish. I’m happy with the way I played,” said Zibrik.

Kitts, Zibrik, and Tadey posted the six lowest rounds of the tournament this week, alongside host Executive Professional Brian McDonald’s opening round of 73. Dave was not the only Zibrik who found success at this championship. Shaughnessy Golf & Country Club Head Professional and wife, Ashley, finished in a tie for sixth place with McDonald at seven-over par, each cashing $750.

Though the gusting winds may have been a major contributing factor to difficult play this week, competing Professionals were thrilled with the opportunity to play the Les Furber-designed course at Fairview Mountain Golf Club and its tremendous conditions. The PGA of BC extends its thanks to host Executive Professional Brian McDonald, Head Professional Rob Tadey, Superintendent Steve Pearson, and the entire team of staff and volunteers at the club for their outstanding hospitality and assistance in making the tournament a great success.

The Association also extends its appreciation to title sponsors Srixon/Cleveland Golf and presenting sponsors Oakcreek Golf & Turf LP and Nike Golf for their generous support and on-site presence at the event.