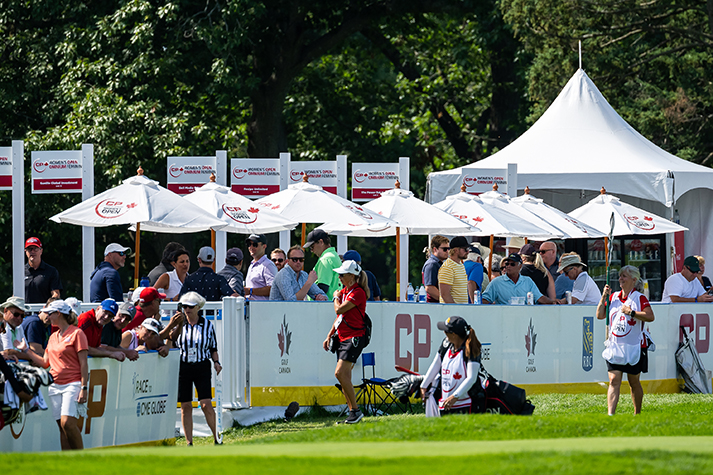 As he prepares for the 2023 CP Women’s Open at Shaughnessy Golf & Country Club in Vancouver, tournament director Ryan Paul knows he has a tough act to follow.

The 2022 tourney, held this past summer at Ottawa Hunt and Golf Club, was a huge success and was named Tournament of the Year by the Tournament Partners of the LPGA at the recent season-ending awards ceremony in Naples, Fla.

Golf Canada’s Paul now must decide what he and his team are going to do for an encore. It’s a nice problem to have...

“We are trying to figure out how we build on the success we had this year,” says Paul, who was in Vancouver last week to visit Shaughnessy.

“We had record crowds, a record number of (corporate) partners, the volunteer program was fully subscribed four months out and it all culminated with tournament of the year. We are working hard on new additions and fun activities we can do to bring the fans out and celebrate golf in Vancouver and British Columbia.”

The main purpose of last week’s visit to Shaughnessy was to determine where all the corporate hospitality structures are going to go. “We’re seeing how much we can fit there,” Paul says. “All of our partners are looking to do their public viewing decks and we go out and see how big we can build stuff on the holes and our spectator village hub and all of that. We got all our measurements done before the snow came down.”

It figures to be a tight squeeze. Shaughnessy’s footprint is on the snug side compared to many other championship layouts. “Yes, it’s certainly tighter than others we have been to, but I wouldn’t say it’s challenging in that way,” Paul says. “The tightness kind of adds to the challenge of the golf course itself. You celebrate that while you are figuring out the logistics around it. There are not head-scratching moments like how do we fit everything here. It’s got more than enough room for that.”

A popular feature of the 2022 tourney in Ottawa — ‘The Rink’ — will return next summer on Shaughnessy’s par 3 17th hole. “Bringing it to the CP Women’s Open this year was huge for us and we’re going to a have a lot of fun with it at Shaughnessy as well,” Paul says.

Shaughnessy’s 17th will be turned into a makeshift hockey arena complete with boards that will wrap around the tee deck and up the left side of the hole. Last year, Nelly Korda played The Rink hole in Ottawa wearing a Chicago Blackhawks jersey, while Canada’s Brooke Henderson donned an Ottawa Senators jersey. Paul expects to see some Vancouver Canuck jerseys next summer at Shaughnessy.

“Hopefully, the crowd gets into it because when they start banging on the boards it’s pretty cool,” Paul says. “It will have a good atmosphere and a few of our partners want to come aboard as well and put heir viewing structures and celebrate their brands on that hole, which is great. There are a lot of good spots for the Zamboni and all the other branding options that we have. And those views looking out over the water from No. 17 are magnificent.”

Next summer’s tourney goes Aug. 24-27 and tickets are now on sale at cpwomensopen.com/tickets. Children aged 12 and under get free admission to the tournament.

FLYING SOUTH: Twenty-one British Columbians will tee it up at this week’s PGA Head Professional Championship of Canada. The 54-hole event is being played at Verrado Golf Club’s Victory course in Buckeye, Ariz. The tournament features a purse of $55,000 with the top head pro, teaching pro and executive pro each earning $9,000.

FAMILIAR FACES: The final stage of the PGA Champions qualifying school goes this week in Scottsdale, Ariz., and the 78-man field includes two players with B.C. connections. Golf Channel analyst Brandel Chamblee, whose lone PGA Tour win came at the 1998 Greater Vancouver Open at Northview Golf Club’s Ridge course in Surrey, has a spot in the field. So does Kris Blanks, who lost a sudden-death playoff to Sean O’Hair at the 2011 Canadian Open played at Vancouver’s Shaughnessy Golf Club.

Blanks has another B.C. connection. He is married to Tami Dougan, a White Rock native who played collegiate golf at Ohio State University. There are three Canadians in the field: Michael Bruchet of Calgary, Dennis Hendershott of Paris, Ont., and Alan McLean of London, Ont.

TOP-10 FINISHES: Trevor Yu of Vancouver and Langley’s James Allenby registered top-10 finishes at the Asher Tour’s Legacy Classic in Phoenix. Yu, who plays out of Marine Drive Golf Club, tied for sixth in the 54-hole event at Legacy Golf Club at 13-under par. Allenby finished ninth at 11-under. Joe Fryer of Long Beach, Calif., won by nine shots with a score of 25-under that included a 60 in the first round. The Asher Tour is the new name of what used to be called the Golden State Tour.

YOUELL HONOURED: Brian Youell, the master superintendent at Uplands Golf Club in Victoria, has been selected as the Canadian Golf Superintendents Association’s John B. Steel Distinguished Service Award recipient for 2022. The award is presented annually to an individual who has made an outstanding contribution to the advancement of the profession. Youell has been a CGSA member since 1992 and is in his 42nd year at Uplands.