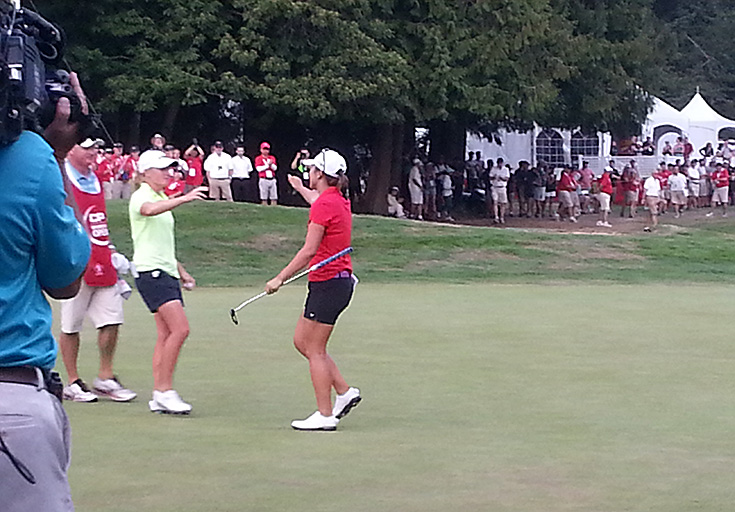 It may be time for the City of Coquitlam to rename itself ‘Koquitlam’ in honour of Lydia Ko.

Ko would make par on the first playoff hole, the par-4 18th, while Lewis made bogey after hitting her drive into the left rough, hitting a terrible second still in the left rough before her chip to 12 feet. Lewis hit a solid putt, but it stayed right and out of the hole.

“It feels amazing. It’s great to come back to Vancouver and play well,” said Ko. “I had an amazing week. I didn’t know in 2012 I’d be coming back and winning here.”

Ko realized that Lewis was in some gnarly rough, but she put that thought to the back of her head. “You just have to concentrate on your game,” she said. “I don’t want to get too aggressive to that pin. I made a really good first one on that one. . . If the putt was longer on the second one, I would have been pretty nervous.”

Ko was disappointed not to drop more putts, but the putter came through when it counted the most. “I only made one birdie today, that says it all,” she said. “When it really counted, I was able to make those putts.”

Ko congratulated the woman she beat in the playoff. “Stacy played amazing today, shooting 67 under those conditions,” said Ko. Lewis, who rushed past reporters after the playoff, did provide some quotes to an LPGA staffer afterwards.

“If you would have told me at the beginning of the day I was going to be in a playoff, I would have been pretty happy,” said Lewis. “(I) would have liked a better lie in the rough in the playoff, but other than that, it was pretty good.”

Ko played the 18th almost exactly the same as she did about 30 minutes earlier. After a great drive right up the middle, Ko hit her approach to the right, about 50 feet underneath the hole. Ko would cozy up her putt to two feet, making the par that gave her the title.

As Ko was being presented with the winning trophy, she received congratulations from an old friend in the 18th green hospitality tent. Her caddy in 2012, Vancouver Golf Club member Brian Alexander, wished Ko and her family all the best as Ko waited to be presented with her trophy.

And when she was on the green, Ko’s friend, Sue Kim of Langley, sprayed Ko with water, in a move reminiscent of three years ago, when Ko’s friends, including Danielle Kang, emptied their water bottles on Ko. Alexander caddied for Kim this year, but couldn’t work the same magic as he did with Ko in 2012. 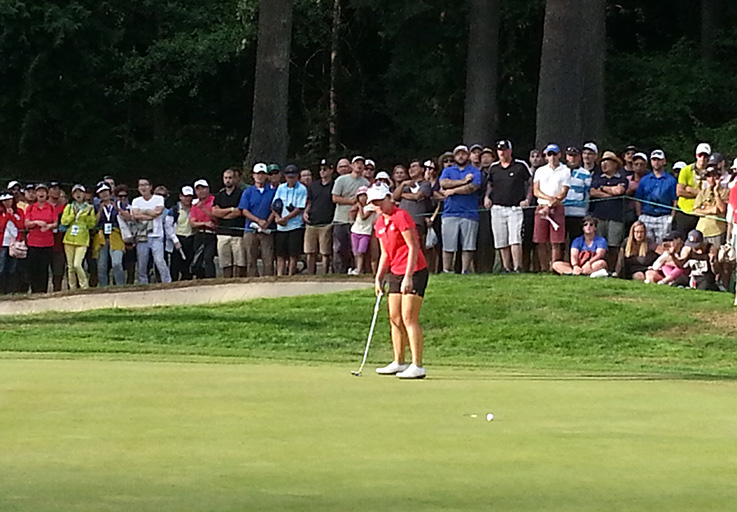 Ko had several chances to put the tournament away, but other than a birdie on the third and a bogey on the 9th hole, Ko didn’t capitalize on her numerous birdie opportunities. At the driveable par-4 14th, Ko was short on her drive, hit a below-average chip and could only make par. At the par-4 17th, Ko hit a gorgeous approach to 12 feet left of the pin, only to miss the birdie putt.

And at the 18th, Ko flared her approach to the right, but made a beautiful two-putt from 50 feet to force the playoff with Lewis. 2014 champion So Yeon Ryu made an eagle on the 14th hole to get within striking distance of Ko, but Ryu fell a stroke short of getting into the playoff. Her (-11) score of 277 was equaled by Sei Young Kim, as the two South Koreans tied for third place.

Ko started the day tied with Candie Kung of Allen, TX, but Kung quickly played herself out of contention with bogeys on the 4th and 6th holes. Kung would finish T5 at (-10) 278, along with Alison Lee, who was congratulated by her future Solheim Cup teammates, including Michelle Wie, behind the 18th green.

The big difference for Ko this year is that instead of just lifting the Canadian Women’s Open trophy, she gets to take home the $337,500 winner’s cheque. Winning as an amateur in 2012 and 2013, all she could take home was the trophy and some pro shop credits.

The $300,000 winner’s cheque went to Inbee Park in 2012 and to Karine Icher in 2013. The Canadian story of the tournament, despite her finish, was Smiths Falls, ON’s Brooke Henderson. Henderson came to Vancouver after winning the Portland stop on the LPGA Tour schedule by a whopping eight strokes.

She drove to Vancouver with her family and agent on Monday, participated in a conference call and then played a Pro-Am with members of the Vancouver Canucks alumni. Later that night, she successfully petitioned LPGA Commissioner Michael Whan for an exemption onto the LPGA Tour and by Tuesday, she was playing another practice round at the Vancouver Golf Club. 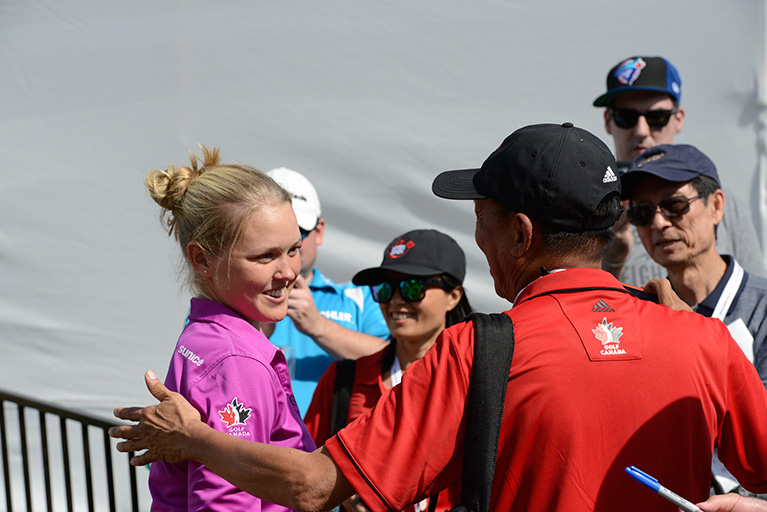 On Wednesday, it was time for Henderson to play another Pro-Am, so it was almost a minor miracle that she was able to shoot a (-2) 70 during her opening round Thursday afternoon. Predictably, she hit the proverbial wall on Friday morning, bravely gutting out a (+3) round of 75 that got her into weekend play by the skin of her teeth.

The leaders on the first two days weren’t determined until literally the final groups each day. France’s Karine Icher, playing in the last group Thursday, fired a (-7) round of 65 which vaulted her to the top of the leaderboard.

By Friday night, Icher and Lydia Ko were tied at (-9) and looking like co-leaders when Taiwanese born, but now Allen, TX resident Candie Kung fired a course record tying 64 – Nancy Scranton and Chella Choi have also shot 64 in competition at the Vancouver Golf Club – to finish at (-11) and a two-stroke lead.

On the home front, there were 14 Canadians who teed it up on Thursday, including the surprising 14-year-old Tiffany Kong of Vancouver, who earned one of the four Monday qualifying spots by shooting an even par round of 72 at the Pitt Meadows Golf Course.

Kong would survive a three-for-two playoff on Monday to earn her spot into the tournament and she certainly didn’t disgrace herself with a (+9) tournament, with rounds of 76 and 77.

Besides Brooke Henderson making the cut, the red-and-white colours were also carried by Maude-Aimee Leblanc and Alena Sharp on the weekend, while Coquitlam’s SooBin Kim, playing for South Korea even with her deep Lower Mainland roots, also cashed a cheque on the weekend.

Brittany’s presence on the course was notable because Brooke Henderson’s walking scoreboard referred to her as Bro. Henderson, to distinguish her from Bri. Henderson.

By Saturday, Brooke Henderson was eking out another par round of 72, making a birdie at the last to get some momentum going into Sunday. Sister Brittany, having missed the cut, picked up her younger sister’s bag and looped for two rounds.

Icher fell off the pace, with California’s Alison Lee playing herself into contention with a (-6) 66 that got her to (-10) for the tournament. Kung made a sloppy bogey on the first hole, while Ko made birdie to get herself into a tie for the lead.

Kung rallied with a birdie to take the lead after two holes, but Ko soon regained the lead, holding it until the 18th hole, where she made her lone bogey of the day en route to a (-3) round of 69 and (-12) for the tournament. Kung would also finish at (-12), as her (-1) round of 71 was solid, if not unspectacular.

Sunday’s action would see Ryu become the fourth player to shoot a course record (-8) 64, along with the aforementioned Kung, Chella Choi and Nancy Scranton.

But once again, the story of the Canadian Women’s Open was Lydia Ko, who seems to feel at home in Koquitlam.