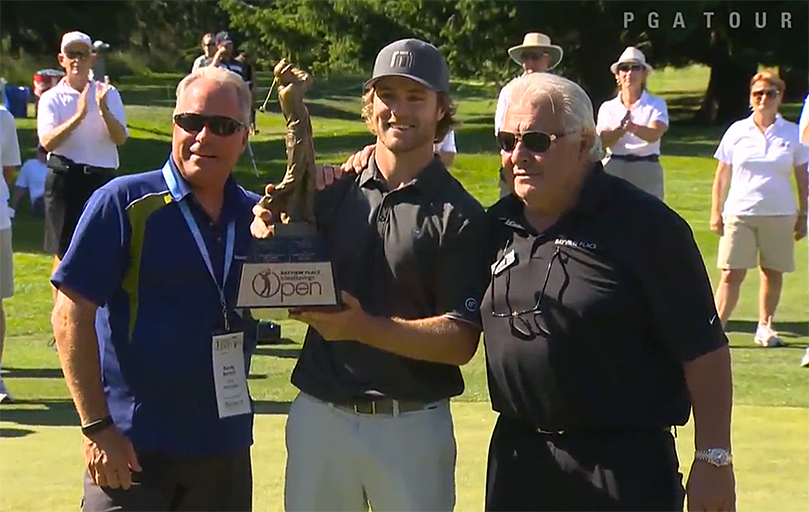 Three Other British Columbians Finish In The Top 10

Adam Cornelson could be a poster child for perseverance. The Langley native has absorbed plenty of punches as he chased his professional golf dream the last few years.

Just last month Cornelson had to pull himself off the canvas and fight for survival on the Mackenzie Tour-PGA Tour Canada circuit. He passed that test of nerves at qualifying school at Crown Isle in Courtenay and on Sunday finally delivered a knockout punch of his own.

In his 52nd start on the Mackenzie Tour, Cornelson earned his first win, beating the field by five shots at the Bayview Place Island Savings Open at Uplands Golf Club in Victoria.

The win was worth $31,500 to Cornelson and puts the 28-year-old left-hander in great position to chase one of the five promotions available to the Web.com Tour at season’s end. Cornelson finished off his round in style, chipping in for birdie on the 18th hole. He closed with a five-under 65 to finish at a tournament record 20-under par.

“It’s the best week of my golfing life,” Cornelson said. “I’ve always felt if and when I was going to win, it would be at this tournament. It suits my eye so well, and I love this city so much. The support this city, this crowd and the volunteers have showed me, it was chilling. I’ve never felt support like that in my life, and it gave me so much energy to continue on. It was phenomenal.”

Three other British Columbians finished in the top 10. Seann Harlingten of West Vancouver, who also closed with a 65, finished alone in fourth at 12-under. Langley’s Thomas Hay shot 66 Sunday and finished tied for sixth at 10-under and Brad Clapp of Chilliwack tied for ninth at nine-under after his 68 on Sunday.

The Mackenzie Tour moves to Kelowna this week for the inaugural GolfBC Championship at Gallagher’s Canyon Golf & Country Club.

OPEN SEASON: The fact she has a spot in the U.S. Women’s Open is still sinking in for Surrey’s Taylor Kim, who now has a month to prepare for what will be the biggest golfing moment of her life.
Kim, the 2014 B.C. Women’s Amateur champion, earned a spot in the field by winning a sectional qualifier last week in Fairfield, Calif.

“There were 82 girls playing and the there were only two spots available,” Kim said. “The golf course really suited me and I played really well. Being able to play in the U.S. Open really means a lot to me, especially because it will be my first LPGA Tour event. I am really so excited.”

Winning that qualifier wasn’t easy and Kim knows playing in the U.S. Open won’t be either. The tournament, arguably the biggest in women’s golf, goes July 7-10 at CordeValle Golf Club in San Martin, Calif. Kim has watched the tournament on TV enough times to know that it will be a tough test.

“I know the U.S. Women’s Open always has one of the toughest course setups out of all the majors,” Kim said. “When I was watching it on TV last year I was hoping I would be there someday. I am expecting a really hard golf course, with long rough, and it will be set up to play long. But I am really excited.”

Kim just graduated from Kent State University in Ohio. She called her collegiate experience wonderful and one that helped her golf game. “It was a very good experience, especially with the coaches that I had at Kent State,” she said. “They helped me a lot with my golf game and also I got a degree in communication studies, so I was proud of myself.”

Kim, who has just turned pro, will have some B.C. company at the Open. Langley’s Sue Kim, a regular on the Symetra Tour, and Victoria’s Naomi Ko have also earned spots in the tournament.

EARNS EXEMPTION: Ko, who just completed her freshman year at North Carolina State University, will get to play in a warmup event on the LPGA Tour the week before the U.S. Open. Ko won the Cambia Portland Classic Amateur Open last week in Aurora, Ore.

She fired a one-under 71 for the win at Langdon Farms Golf Club and earned an exemption into the LPGA Tour’s Cambia Portland Classic, which goes June 30-July 3 at Columbia Edgewater Country Club. That's the event fellow Canadian Brooke Henderson won last summer after Monday qualifying her way into the tournament.

HADWIN CLOSE: He wasn’t happy with the way his tournament finished but it was still a solid result for Abbotsford’s Adam Hadwin, who tied for 11th at The Memorial in Dublin, Ohio, on Sunday. Hadwin fired a two-over 74 to finish four shots behind winner William McGirt, who beat fellow American Jon Curran in a playoff.

Hadwin made three bogeys on his back nine Sunday. “Pretty disappointing last five holes, but played some good golf to put myself in that position,” Hadwin said via Twitter. “It’ll come! Live and learn!”
He earned $158,677 on Sunday and moved up to 78th from 85th on the FedEx Cup points list. He has made $860,460 this year.

CAREER BEST: Kelowna’s Samantha Richdale closed with a one-under 70 Sunday and tied for 14th place at the LPGA Tour’s ShopRite Classic in New Jersey. Richdale finished the 54-hole event at seven-under par, 10 shots behind winner Anna Nordqvist of Sweden. Richdale, who earned $19,577 on Sunday, has a spot in the field at this week’s KPMG Women’s PGA Championship at Sahalee Golf Club near Seattle.

SHIN SECOND: Justin Shin of Maple Ridge tied for second Sunday at the Cadillac Championship on the PGA Tour China circuit. Shin, who opened the tournament with rounds of 64 and 62, finished at 23-under par. That was six shots behind the winner, American Alex Kang. Shin earned about $21,000 Cdn.

BRIGHT FUTURE: Duncan’s Callum Davison won the Future Links Quebec Championship on Sunday. The 15-year-old carded a final round of one-over 73 and his 54-hole total of three-under 210 was good for a two-shot win. “As the round got going I made a couple good up-and-downs to save par, and then from there I started to play better and get more confident,” Davison said.

DUCK FLIES SOUTH: He won the Mackenzie Tour-PGA Tour Canada qualifying school last month at Crown Isle in Courtenay, but Aaron Wise may not make another trip north of the border. Wise won the singles title at last week’s NCAA Championships in Eugene, Ore., and helped his Oregon Ducks win the team title. PGA TOUR sponsor exemptions are now starting to come his way and Wise passed on committing to this week’s GolfBC Championship at Gallagher’s Canyon in Kelowna.