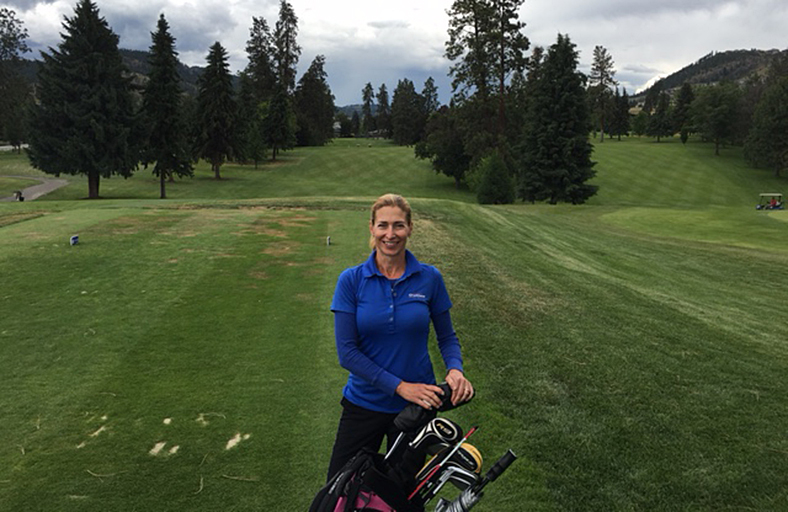 KELOWNA -- Many of her non-golfing friends couldn’t understand why Sandra Turbide was so happy about turning 50. “When I turned 50 I was so excited and people were like, are you crazy?” Turbide said with a laugh Tuesday. “I said you guys don’t play golf.”

Maybe now her friends will understand after Turbide shot a three-over 75 in the first round of the B.C. Senior Women’s Championship at Kelowna Golf & Country Club. That left the Maple Ridge resident one shot behind first-round leader Penny Baziuk of Sidney.

Turbide is what her fellow competitors call a “newbie.” Recently turned 50, she is in her first year of eligibility as a senior golfer. For years, she has been competing against players much younger than she is. “I was often playing tournaments with kids and I would be talking to their parents,” Turbide said.

Now, she’s the new kid on the block.

Turbide’s round included four birdies and an eagle on the par 5 10th hole, where she chipped in from left of the green. It also included a quintuple-bogey eight on the 140-yard par 3 15th that spoiled what could have been a really special round.

“I put two balls in the water,” she said. “I hit the first one a little bit thin with a little fade and I don’t play a fade. I was convinced that was the club, so I teed it up again with the same club, a 7-iron. So then the third ball I changed clubs because now it was in my head. So then I was long, of course. Then I didn’t get up and down. Too bad.”

Turbide, who plays out of Swaneset Bay in Pitt Meadows, is returning to competitive golf after taking last year off to complete her Master’s degree. She works as the French language coordinator for the Pitt Meadows-Maple Ridge school district. She is also mom to two daughters, aged nine and 13, who are both active in sports. “It keeps me very busy,” she said.

Turbide didn’t get in as much practice as she would have liked, so came to Kelowna with no real expectations. She had only played the course once before getting a practice round in on Monday. “I am happy,” she said of her round. “I am here to be happy. I would have liked to have had more time to work on my game, which I did not. So the whole mentality was let’s go, let’s take some days off and have a fun golf trip.”

Turbide has two Pacific Northwest Golf Association Mid-Amateur championships on her resume and has had some top-five finishes in the B.C. Mid-Amateur and Mid-Masters championships. She played in the same group Tuesday as two-time defending Senior Women’s champion Jackie Little of Port Alberni. Little opened with a five-over 77. “It’s always fun to play with Jackie,” Turbide said. “She is a legend. Never count her out.”

While Turbide is a newbie, Baziuk is now a veteran of this championship. She finished third in 2014 when the event was played up the road at Vernon Golf Club. She put herself in position to better that result with her round Tuesday, which included four birdies. “I love this event,” said Baziuk, whose family owns Ardmore Golf Course in North Saanich. “I have played in every single one since I turned 50, so this would be my eighth, I think.”

She credited a hot putter with helping her master Kelowna Golf & Country Club’s subtle greens. “I made a lot of good putts for birdie and I made a nice putt to save par on the 18th,” said Baziuk, who had not played the course until Monday’s practice round in terrible weather.

“I scrambled well and only had one three-putt. The greens have some breaks. You have to be able to read them and hopefully someone is putting ahead of you so you can really get an idea of what is going on.”

Little, a five-time champion of this event, was not totally unhappy with her round. “You know what, I feel like I played better than I actually shot,” Little said. “I just got onto a bit of a bogey-train on the front side and it wasn’t anything serious. Just a little off here, a little off there. It could have been a lot better. I played better on the back.”

Little was forced to skip the B.C. Mid-Amateur and Mid-Master tourney in Nanaimo earlier this month with a bad back. “It’s still dicey,” she said. “I am not going to say it’s perfect. But we’re working through it. I am hoping to get all three rounds in.”

Karen Pultz of Surrey and Nancy Chow of Richmond are tied for third with Little at five-over par.

The B.C. Super-Senior Championship is also being contested this week and two Vancouver golfers, Holly Horwood of Shaughnessy and Phyllis Laschuk of Point Grey, are tied for the lead after opening with seven-over 79s.

“It is such a treat to have the senior women’s event here,” said Horwood, a two-time B.C. Senior champion. “I can’t say enough about that. Everyone is just raving about the course. It’s in beautiful condition.”