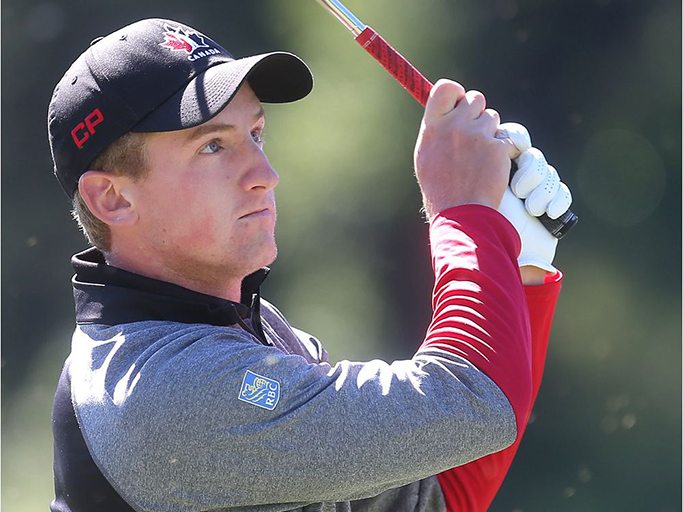 Kimberley's Jared du Toit Is Chasing The RBC Canadian Open Title At Glen Abbey GC In Oakville, Ontario. He Went Into The Weekend Just One Shot Back Of The Lead - Image Courtesy Golf Canada

Kimberley BC's 21-year old Jared du Toit went into the weekend at the RBC Canadian Open at Glen Abbey GC just one shot back of leader Dustin Johnson. Chances are if you'd said a Canadian would be this close to the top of the leaderboard in his national open it would likely be an Adam Hadwin, Nick Taylor or Graham DeLaet.

Even du Toit himself is at least a little surprised but as he said after his second round, “I didn’t have a lot of expectations coming in. To kind of vault up the leaderboard kind of caught me a bit off guard. But everything from now on is just cream on top.”

Sitting at 6-under par and in a T3 following round two, du Toit continued to defy the odds after his terrific opening round of 5-under 67 when he overcame a potentially devastating triple-bogey 8 at the par 5 2nd hole, his 11th, as he had started on number 10.

Under a hot sun and with windy afternoon conditions du Toit opened with a birdie on the 10th later and carded back-to-back birdies on 17 and 18 to finish at two under through nine. At that point, Canada’s number 1 ranked amateur was tied for the lead at -7 with Johnson, the 2016 U.S. Open champion.

Du Toit admitted he was feeling pretty rough after the 'snowman' on number 2, but his caddie, Sean Burke—a local fellow he just met this week—“theoretically kind slapped of me in the head,” du Toit said, and he responded with some incredible putting over his final four holes.

On the par 4 No. 6, du Toit drained a 64-footer. “I was just trying to get it close,” he said. “Then I kinda figured maybe I can make a few more coming in and get my name back up there [on the leaderboard].

Which is exactly what he did. Du Toit finished his round with 3 birdies and a long par-saving putt on the 18th to keep him just a shot off the lead. Needing just four putts to close out his round and keep him on track to possiblly become the first Canadian to win this event since Pat Fletcher in 1954. And he's an amateur to boot.

Yes, this is without a doubt the most fun he’s ever had playing golf. “I’m loving every minute of it,” he said.