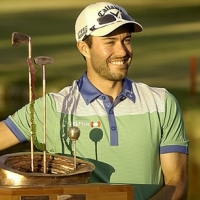 "I don't know what to say," Hadwin said. I really don't know to feel, what to think," he said. "It's amazing. I battled all day and to finish birdie-birdie and make the putts I did on the last two holes gives me so much confidence. I couldn't be happier."

"I heard roars, but I didn't know what happened," Hadwin said. "I knew it was going to be close. I said to my caddie on 17 tee that, 'If I make two birdies, they can't catch us.'"

Hadwin got up-and-down from a greenside bunker on the 308-yard, par-4 17th to tie Presnell for the lead. From 230 yards on the 18th, he hit a 4-iron that missed the green, then chipped to 4 feet and made the putt.

"It was an awkward number. I wanted to hit 5-iron and didn't think I could clear the water if I missed it a little, so I went with 4," said Hadwin, a former University of Louisville player. "I guess I gave up on it a little and luckily it cleared the water. It was a fairly easy chip across the green and was able to get up and down for the victory."

He became the 13th Canadian-born player to win on the Web.com Tour and the first since Chris Baryla in the 2009 Chattanoonga Classic, a span of 111 tournaments.

South Korea's Sung Joon Park, Sweden's Henrik Norlander and American Kyle Reifers tied for third at 13 under. Park shot a 66, Norlander had a 69, and Reifers a 71.