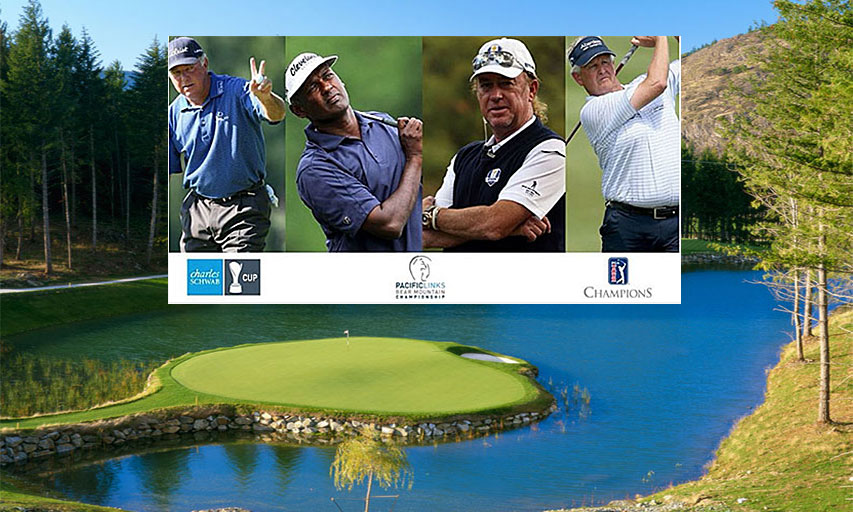 The PGA TOUR Champions event will be contested at Bear Mountain Golf Resort’s Mountain Course in Victoria, British Columbia the week of September 19-25, 2016. The tournament will feature a US$2.5 million purse, with 81 players competing for a winner’s share of $375,000.

Singh, who was inducted into the World Golf Hall of Fame in 2005, won 34 times over a standout PGA TOUR career, including major championship wins at the 1998 and 2004 PGA Championship, as well as the 2000 Masters Tournament.

The Fiji native competed on the International Presidents Cup team eight times throughout his illustrious career, where 31 of his 34 wins came during the Tiger Woods era. The 34 victories rank 14th on the all-time PGA TOUR wins list, ahead of names such as Lee Trevino, Gary Player and Johnny Miller.

Montgomerie, who spent the vast majority of his career competing on the European Tour, has made a second home on PGA TOUR Champions. The 53-year-old has notched three victories on Tour, including the 2014 and 2015 Senior PGA Championship presented by KitchenAid, as well as the 2014 U.S. Senior Open – all of which are senior major championships.

The eight-time European Ryder Cup team member compiled one of the all-time best records in the biennial event, posting a 20-7-1 stat line without losing a singles match. During his tenure on the team, the Scotland native helped the Europeans to five victories, with each coming in his last six years of competition from 1995 through 2006.

Montgomerie won a record eight European Tour Order of Merit titles, including seven in a row from 1993 through 1999. His 31 career victories, which are the most of any British player in Tour history, gave way to a World Golf Hall of Fame induction in 2013.

Much like Montgomerie, Jimenez became a household name through his play overseas, including four stints on the European Ryder Cup team alongside 21 victories.

The 52-year-old earned fan favorite status through the years with his trademark ponytail and well-lit cigar during tournament rounds. On social media, Jimenez acquired an entirely new set of fans via his pre-round stretching routine, which combined the looks of yoga and dance to create an infinite number of posts on numerous outlets.

On PGA TOUR Champions, the Spaniard has won an event each of the last three years, with a victory at the Mitsubishi Electric Classic in April serving as the most recent. Jimenez has been the best player on Tour this year behind Bernhard Langer, notching a staggering seven top-5 finishes in eight starts, including the win and four runner-up finishes.

The trio of legends was joined by five other players of note in the event’s most recent commitment list, with World Golf Hall of Fame member Mark O’Meara leading the way.

Tournament week in Victoria will begin with Official Pro-Ams on Wednesday and Thursday, followed by 54 holes of championship play from Friday through Sunday, with no cut. All three competitive rounds will be broadcast live by Golf Channel to more than 200 million homes in 84 countries and 11 languages around the world.

Tickets are also on-sale for this premier event and can be purchased at www.selectyourtickets.com or by clicking HERE.

Fans can choose from the following ticket options:

About Pacific Links International
Pacific Links was founded in 2009 to provide members with a premium golf experience through an innovative international membership structure focused on the Chinese golfer. Pacific Links offers them access to the finest collection of high quality golf clubs in the world. Since 2012, the Pacific Links Network of Affiliated and Reciprocal clubs now stands at over 500 properties located in 20+ countries around the world. With a strong membership base continuing to grow in China, the planned expansion into other parts of Asia and the aggregated population of members from all the participating clubs, Pacific Links is now expanding the brand platform to encompass more than just golf. We are positioning Pacific Links International to be the preeminent Lifestyle portal for China’s HNW customer providing high demand travel itineraries inspired by golf but encompassing concierge services, flights, accommodations, local tourism experience and travel butler assistance. The main feature of a Pacific Links membership is reciprocal access. In the next 10-15 years, PLI will further expand its international affiliate network to over 1,000 clubs in North America, Europe, Australia, Japan and the entire Southeast Asia. www.pacificlinks.com

About Bear Mountain Golf Resort
Located on southern Vancouver Island - a region known for its year round golf climate, stellar fishing opportunities and strong local food movement - Bear Mountain Golf Resort and Spa offers two outstanding courses that combined represent the only 36-hole Nicklaus Design golf experience in Canada. The Mountain Course, a Jack and Steve Nicklaus Co-Design, features impressive landscape and dramatic terrain that lead to breathtaking 180 degree views of nearby Victoria, the Pacific Ocean and the Olympic Mountains of Washington State. The course, a par 71 playing at 6,925 yards, sets atop a 1,100-foot mountain and has been assigned a slope rating of 142 from the back tees. The 18-hole, par 71 Nicklaus Design Valley Course, a spectacular golf setting that is nestled in a pristine natural 102 acres of mature forests, measures just under 7,000 yards. Surrounded by 3,000 acres of parks and hiking trails, Bear Mountain is one of the few golf courses in North America that offers an authentic natural setting so close to a capital city. More than a resort and an incredible community, Bear Mountain is also home to Golf Canada's National Development team, the high performance training centre of Canada’s National Mountain Bike team, and construction recently commenced on Canada’s largest indoor/outdoor clay court tennis facility supported by Tennis Canada and Tennis BC. The Westin Bear Mountain Golf Resort and Spa rounds out the amenities offering guests a luxurious getaway with outstanding fine dining options, the award-winning Sante Spa, and the Bear Mountain Golf Academy. www.bearmountain.ca

About PGA TOUR Champions
PGA TOUR Champions is a membership organization of golfers age 50 and older, with the most recognizable and accomplished players in the game - including 34 members of the World Golf Hall of Fame, which compete regularly in its events. PGA TOUR Champions is where Legends play, and is home to The Ultimate Clubhouse. Conceived in 1980 as the Senior PGA Tour, it started with just four events and purses totaling $475,000. The primary purpose of PGA TOUR Champions is to provide financial opportunities for its players, entertain and inspire its fans, deliver substantial value to its partners, create outlets for volunteers to give back, protect the integrity of the game and generate significant charitable and economic impact in communities in which it plays. In 2016, the newly-introduced Charles Schwab Cup Playoffs will identify and recognize the Tour’s leading player via a season-long race for the Charles Schwab Cup. The Commissioner of the PGA TOUR is Tim Finchem. Greg McLaughlin is President of PGA TOUR Champions. The PGA TOUR’s website is pgatour.com, the No. 1 site in golf, and the organization is headquartered in Ponte Vedra Beach, Fla. Follow PGA TOUR Champions at facebook.com/PGATOURChampions and on Twitter @ChampionsTour.

About Help Fill a Dream – (Official Charity Partner)
Help Fill a Dream provides hope, help and happiness for Vancouver Island and the Gulf Islands children with life-threatening conditions. The foundation fulfills dreams, improves quality of life and assists families with care and financial support. Help Fill A Dream is proud to be celebrating 30 years of making Dreams come true. www.helpfilladream.com