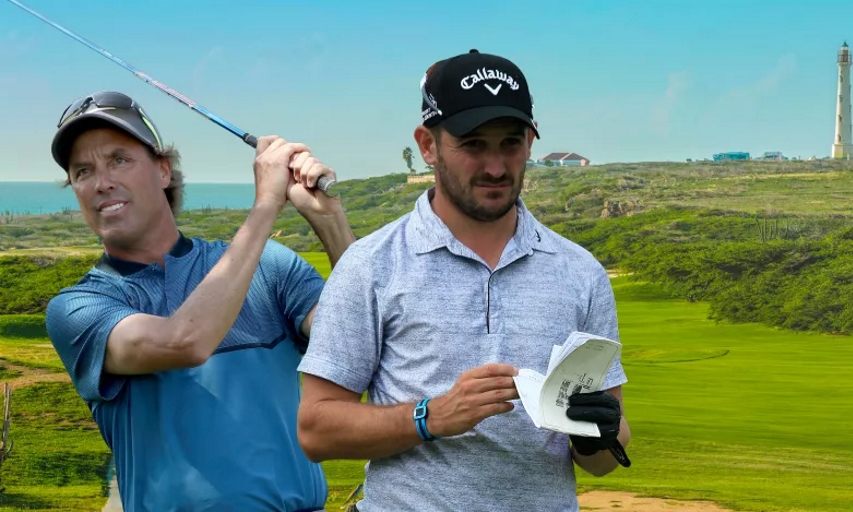 OAKVILLE, Ontario, and PONTE VEDRA BEACH, Florida — Four-time PGA TOUR winner Stephen Ames and PGA TOUR member Julian Etulain will captain the teams from the Mackenzie Tour – PGA TOUR Canada and PGA TOUR Latinoamérica at the inaugural Aruba Cup, December 12-18 at Tierra del Sol Resort and Golf, it was announced along with a new logo for the event.

Ames, who played on the Mackenzie Tour from 1990 to 1991 and has amassed more than $20 million in career earnings and Etulain, a three-time PGA TOUR Latinoamérica winner who earned his PGA TOUR card for the 2016-17 season, will lead the teams of 10 players each in the President’s Cup-style match play event at Tierra del Sol.

“I’m honoured and excited to lead the Mackenzie Tour team into this competition at an incredible venue for the first time,” said Ames. “I fondly remember my time starting my career in Canada and know that the guys on our team are well on their way to making the next step on the path to the PGA TOUR, and it should be a fun week of great golf in Aruba.”

“It’s an honor for PGA TOUR Latinoamérica to have asked me to be the captain of the Aruba Cup,” said Etulain. “It was a pleasant surprise to have been asked and when I was, I didn’t hesitate to say ‘yes.’ This will be a new challenge for me, and I have no doubt that we will form a great team and have a great competition.”

A Vancouver, B.C. resident who hails originally from Trinidad and Tobago and became a Canadian citizen in 2003, Ames counts a victory in 2006 at THE PLAYERS among the highlights of a professional career that began in 1987. Ames now plays on PGA TOUR Champions, where he has accumulated 11 top-10s in 42 career starts.

Etulain captured his first PGA TOUR Latinoamérica win at the 2013 Lexus Peru Open and went on to win twice in 2014 to lead the Order of Merit and capture the Roberto de Vincenzo Award as Player of the Year, earning exempt status on the Web.com Tour, where he finished runner-up twice to earn his PGA TOUR card for 2016-17.

“We’re thrilled and honoured to be hosting two great champions like Stephen and Julian along with their respective teams at Tierra del Sol. We can’t wait to get started and are looking forward to an outstanding week of competition and fun in December,” said Oliver Riding, Director of Golf Operations, Tierra del Sol Resort and Golf.

The 10-man roster for the Mackenzie Tour, which includes the top 10 players available on the Order of Merit with a minimum of five Canadians, will be announced in the coming weeks, while the Latinoamérica team will be announced following the conclusion of the 2016 season.

The Aruba Cup will take place December 12-18, with the three competition days featuring Fourball, Foursomes and Singles matches on December 15, 16 and 17.