Birdies, A Bride And Maybe A Win In Hadwin’s Plans For 2017

Personally and professionally, Adam Hadwin figures 2017 is going to be a great year. The former seems a given, as Hadwin will marry his fiancee, Jessica Dawn, in a late March ceremony in the Arizona desert. But Hadwin is also expecting 2017 to be a significant year on the golf course.

Now in his third year as a PGA TOUR regular, the 29-year-old Abbotsford pro is adamant that he is ready to win on golf’s biggest stage.

“If it doesn’t happen this year it will happen soon,” Hadwin said in an interview with British Columbia Golf. “I think my attitude about that is not necessarily if, but when. It’s the same way I was thinking about the PGA TOUR. It wasn’t a matter of if I was going to make it, it was a matter of when, and I think that probably holds true about a win as well.”

Hadwin begins his 2017 schedule Jan. 19 at the CareerBuilder Challenge in La Quinta, Calif. He is hoping 2017 can start as well as 2016 ended. Hadwin began his 2016-17 season with a strong fall, which ended with a tie for 10th at the OHL Classic at Mayakoba in Mexico. He then teamed with Ontario’s David Hearn for an 11th-place finish at the World Cup in Melbourne, Australia in late November.

He has enjoyed the subsequent break, but is anxious to get back to work. “I was able to get off to a better start this year, probably the best start that I’ve had playing in the fall,” he said. “It's always good to do that. I'm just looking forward to playing again, getting the nerves back again and feeling what it’s like to be on the golf course and have to make four-footers that actually mean something. It's been a while since I've stood over a putt thinking to myself, I can’t miss this.”

Hadwin will certainly have some good memories to draw upon as he returns to the CareerBuilder tourney. He came close to earning that elusive first win last year, when he had a share of the lead starting the back nine on Sunday. Some stumbles down the stretch dropped him into a tie for sixth, but Hadwin said he learned a lot that week that will help him when he finds himself in contention again.

Hadwin recently watched the final round of last year’s CareerBuilder tourney -- which was won by Jason Dufner -- when Golf Channel replayed it over the Christmas break. “What sticks out to me is I remember on the 10th hole I hit it to 30 feet, Dufner hit it to 35 or 40 feet and he makes it. I just missed my putt so I'm one back and I remember walking off that green and looking at my caddie and saying ‘we're going to have to make some birdies on this back nine, Dufner looks primed to make a few birdies.’

“Instead of thinking, okay, just just keep giving yourself chances, keep putting yourself in position, play your game, be patient, I immediately went to 'I’ve got to make birdies'. I found it very helpful to watch it again. I made three bogeys in four holes and I could see my attitude shift a little bit during some of those bogeys. Those are certainly things that I have learned.” 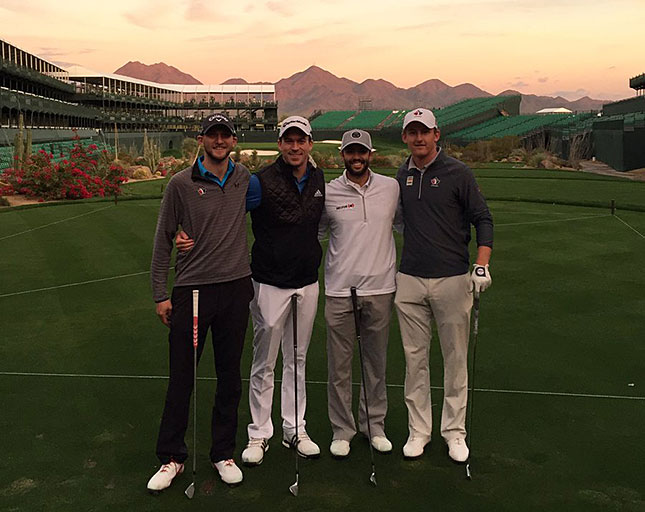 Hadwin also remembers the huge support he had that week, particularly in Sunday’s final round. “It is definitely snowbird heaven down there,” Hadwin said with a chuckle. “They come out in full force for all of us (Canadians). It's really nice to play in front of crowds that are cheering you on and I remember one of the Tour guys telling me that when I was in the final group last year that outside of (Phil) Mickelson I probably had the loudest first hole cheer when they announced my name.

That is pretty cool and a lot of fun. It's always a fun event and playing in the pro-am and stuff makes it a bit more relaxed. It’s a nice way to kind of get the year started off. You're not thrown to the wolves right away. You kind of ease into it. Plus, I am very familiar with the golf courses from Q-school and all that.”

Hadwin’s second year on Tour was better than his first. He finished 85th on the FedEx Cup points list last year after being 105th in his rookie season. He was a much more consistent player last year, making 20 of 27 cuts. A hot putter helped. His putting average of 1.730 per hole was fifth best on Tour.

“I certainly don’t think the ball-striking improved at all,” Hadwin said. “It was pretty lacklustre my first couple of years out there, but the putting helped me in a lot of events. I was much more consistent than I was the first year and I attribute most of that to my putting. It helped me hang in there and I made some putts that maybe I shouldn’t have and got to the weekend. And the other thing is just growing more patient and not getting as frustrated as easily.”

After skipping the Sony Open in Hawaii, Hadwin will play the rest of the West Coast swing. Hadwin said he will concentrate on golf while Jessica takes care of the wedding planning. “I’ve pretty much let her do it,” he said. “It’s funny, any time I do get involved we tend to disagree, so I just try to stay out of it as much as possible. She has been really good, she has handled everything for us and booked everything and taken care of that so I could just go out and play and do my thing.”