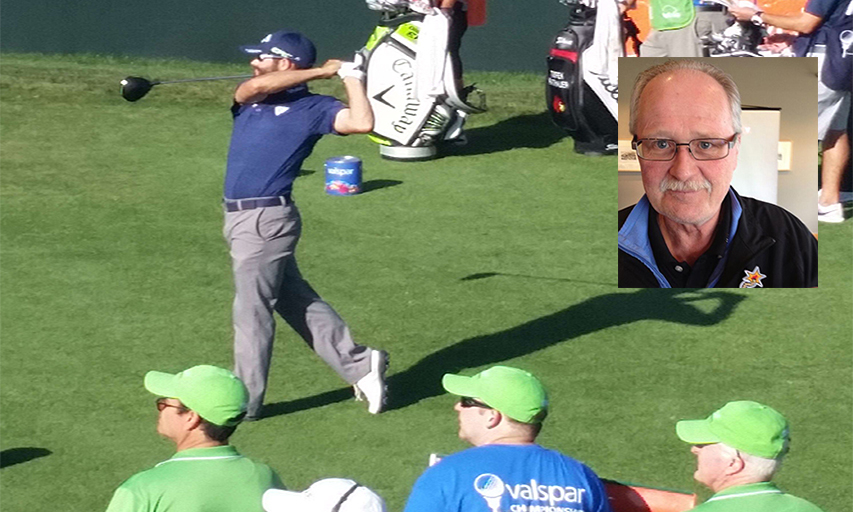 While Son Adam Was Playing His Way To His 1st PGA TOUR Victory, Mom Brenda (Not Shown) Couldn't Watch, But Dad Gerry (Inset) Was Glued To The TV - Image Credit/Kelly Murray/Twitter

His mom couldn’t bear to watch, finally turning on the TV when her son was on the 18th green. His dad didn’t miss a shot.

Both of them could not be more proud of their son, Adam Hadwin, who on Sunday won the Valspar Championship in Florida for his first PGA TOUR win.

Adam’s mom Brenda spent Sunday nervously pacing the floor of the family’s Abbotsford home. Going back to his amateur days, she just hasn’t been able to watch Adam compete.

She says she just finds it too stressful. It’s probably just as well she skipped most of Sunday’s final round, which turned out to be a roller-coaster ride of sorts when Adam lost his four-shot lead before winning with a clutch up-and-down par on the 18th green.

Brenda turned on her TV just in time to see the finish. “I turned it on at 10 to 3 and they were on the 18th hole and I started shaking,” Brenda said. “I just cannot watch for five hours.”

Brenda had not even been following the scores on-line. So she had no idea where Adam stood when she finally broke down and grabbed the remote. “I saw he was tied for the lead and saw Patrick (Cantlay) hit it into the bunker. I saw Adam hit it over the green and watched from there on.

While Hadwin’s mom was avoiding the TV, his dad Gerry was glued to it. Gerry, the director of golf at Ledgeview Golf Club in Abbotsford, didn’t miss a shot. He invited some of Ledgeview’s regulars over to the club and they watched it over beer and pizza. “I am okay now, it’s over,” a relieved Gerry Hadwin said. “It was a little exciting.”

Gerry and his pals were hanging on every shot as Adam tried to protect his lead. The biggest roar -- other than the one that followed his tap-in par to clinch the win -- came when Adam drained a 53-foot putt for birdie on the par 3 13th hole.

“It went absolutely nuts,” Gerry said. “It’s funny, because I had just called it, believe it or not. I said, ‘you know what boys, this is going in.’ For some reason he is just like that and sure enough it went into the hole.”

Gerry joked that he was a nervous wreck by the time the round was over. He kept sneaking outside to sneak drags on a cigarette to calm his nerves. “Not being there, I was so nervous,” Gerry said. “Everybody was joking about how much I was smoking. I was in and out, in and out. I didn’t want to miss any of his shots, so I only smoked half of every cigarette.”

Like so many others, Gerry knew that his son was going to win sooner rather than later on the PGA TOUR. And he is also confident that this will not be his last win. “They kind of know who he is out there now,” Gerry said. “You don’t shoot 29 three times and 59 and now win a golf tournament being lucky. He is not a one-hit wonder.”

Adam’s win makes a busy time in the Hadwin household even busier. Gerry and Brenda have been preparing to head south in about a week’s time for Adam’s March 24th wedding in Scottsdale. Ariz. Now, one or both of them will also be heading to Augusta, Ga., in early April for The Masters.

“I'm going to be working my tail off the next seven or eight days to make sure I have everything under control here at work,” said Gerry, who was just promoted to director of golf at Ledgeview, the Abbotsford course where Adam and fellow PGA TOUR winner Nick Taylor learned the game.

Brenda’s not sure yet if she’ll go to Augusta. “We have this dog,” she said with a laugh. And besides, she’s not sure she’d be able to watch.