BC’s Hadwin To Drive Down Magnolia Lane With The Valspar Trophy In The Back Seat, Amongst Postponed Honeymoon Plans 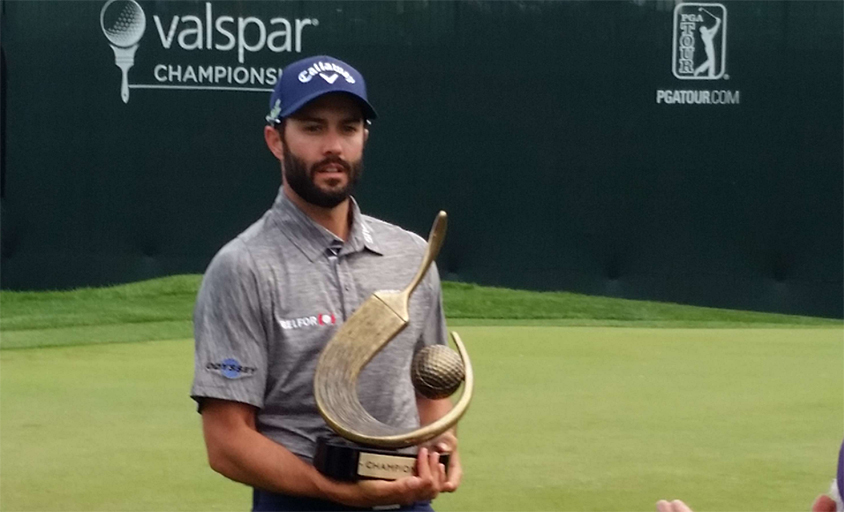 The road just got a little bit busier for the latest winner on the PGA TOUR. There's a special fraternity of three Canadians that will be playing at the Masters this year.

The latest addition to that fraternity grew up about 1 hour east of Vancouver in Abbotsford, British Columbia.

In the media room for the post-victory press conference, references to Moose Jaw, Saskatchewan were thrown around constantly and the assembled scribes kept asking him if there were golf courses there and Adam Hadwin said, "My dad was a pro at one of them so there must be at least one."

So not only will he be changing his honeymoon plans and re-routing his then newlywed wife Jessica to Augusta National for the week, but he has to scurry around and attempt to collect back the money he's put down on his original honeymoon plans.

Hadwin mentioned he has to get that deposit back and claimed, “I’m not joking.” He did say the good news was that he had refundable air tickets because you never know, things could have changed - and they did today with a one-foot putt at the 72nd hole to win his first PGA TOUR event in front of thousands of Canadian fans yelling and screaming his name...ADAM ...HADWIN... all around the property.

It was certainly something to see and experience, this wonderful crowd of sun-worshipping ‘snowbirds’, transplants and vacationing Canadians here in the town of Palm Harbor, Florida.

I walked close to 58 of the 72 holes with Adam and he looked very poised, very calm, cool and collected the entire time, other than a couple of missteps on the closing holes. On the par-3 15th hole he hit his iron high and wide right leaving himself a 64-foot putt, which he struck online but left short some 6 1/2 feet.

Still, he made that to maintain what was at the time a two-shot advantage over playing partner and his main pursuer, Patrick Cantlay. Then came the tough final three homeward holes known as the ‘Snake Pit, 16, 17 and 18.

Hadwin teed off on 16 with the same 3-wood he had struck to near perfection while parring the number one ranked most difficult hole in the tournament during the first 3 rounds, but this time he hit it weakly to the right and into the drink, his first real mishit of the day.

The Canadians in the gallery were acting as his 15th club in the bag and were still cheering him on as he had to take a very difficult angle after dropping his ball at the point of entry to the water and continue up the treacherous 16th hole.

He chose 7-iron for his third shot to a very tight landing area, surrounded by trees, rough and water, commenting afterwards that it was a very difficult shot and you could easily hit a bucket of balls trying to get to a safe spot from there.

I rarely got nervous when I actually played golf, but in speaking with Hadwin’s sports agent, George Sourlis, he and I both were getting a sweaty brown and our stomachs were in a knot by this time. But when we talked to Adam after the tournament he said he never felt that way, it was just us - suffering through not being able to control what was taking place.

In trying not to think of all the ‘what ifs’ we were just praying that he would hit solid shots the rest of that hole and then put it behind him. Get back to that calm, cool and collected mind-set he displayed while playing the previous 68 holes and finish it off. And that’s exactly what he did and for that Canada should be very proud.

The country has in Adam Hadwin a wonderful representative going to the Masters this year and we should watch for him to have a great run at Augusta National as the course will suit him well. He's a sharpshooter and a sharp guy as well and he's got terrific support behind him in his fiancee, Jessica.

Case in point, she related how last year she sat him down and point-blank said she didn't like the way he looked when he behaved badly on the golf course and since that time he’s turned it around. He’s now making legions of new fans worldwide as they witness the blossoming of a talented player and a true gentleman in the game.

As for the rest of the Canadian contingent, David Hearn, Nick Taylor and Graham DeLaet all made the cut, which was more great news for Canadian golf. Hearn had his best finish of the season with a T19 at (-4). DeLaet had his moments where he was charging up the leaderboard, occasionally falling back and then finishing with two bogeys over the last three holes and T22 at (-3). Hadwin’s friend and Ledgeview GC fellow club member, Nick Taylor finished at (+5) and T62.