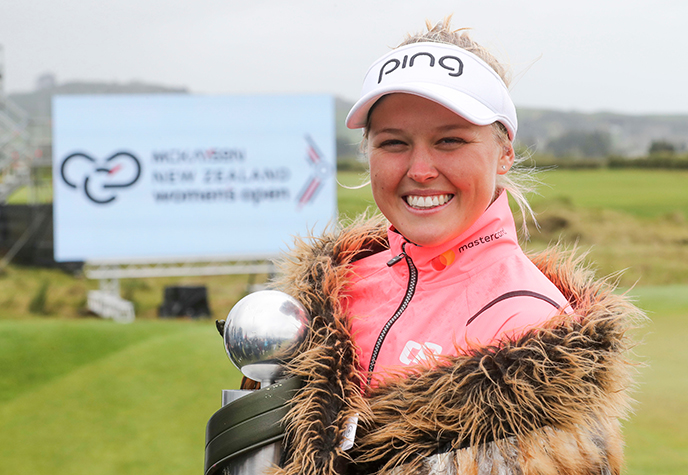 Canadian Brooke Henderson made light of the challenging conditions on Monday to run away from the field and claim the MCKAYSON New Zealand Open by five shots.

Henderson, the world No. 12, had looked the class act of the field all week in Auckland. The 20-year-old claimed her fifth LPGA title – and second of the year - with sizzling rounds of 65, 70, 67 and a remarkable 69 in extremely challenging conditions over Sunday and Monday as stormy weather sent the tournament into a fifth day.

Picking up her round Monday after competing just six holes on Sunday as rain and thunderstorms lashed the Windross Farm course, Henderson made light of the still gusty conditions to see off challenges from China’s Jing Yan (-12) and Korea’s Hee Young Park (-11).

Mid-way through her round she led by as many as six shots as the field drifted back in the tough conditions. Leading by four heading down the 18th, the classy Canadian closed out the victory with a birdie.

“This is so amazing to get my first win outside of North America, my fifth win on the LPGA Tour, it is incredible. It is a dream come true and to do it in New Zealand – I am really excited to be here,” Henderson said.

“Brittany (her sister and caddy) and I did an extremely awesome job of adapting to those conditions. All day yesterday I was trying to overcome that one shot deficit in case the tournament got cut short. That drive and that push to keep making birdies is what got me in this position.

“Normally this type of golf course doesn’t suit my game but it now gives me a lot of confidence going forward with the British Open and things like that knowing that I can play well on Links golf courses and especially in terrible conditions like the last two days.

“I played awesome to shoot 69. I hit a lot of good shots. I knew I had a significant lead with four holes to go and tried not to make any major mistakes. But the shot into 17 sealed it.”

The low round of the day was shot by American Jennifer Song, whose impressive four under par saw her finish at -10 and in sole possession of fourth.

Spain’s Belen Mozo, the leader after three rounds, faltered badly in search of her maiden LPGA title, carding a final round 78 to drop to share of fifth place at 9-under.

Home town favourite Lydia Ko briefly pulled into contention when she eagled the par four 15th by holing her approach, however the former world No. 1 doubled bogied the 17th and then triple bogied the 18th to drop five shots over the last two holes.

“I played really solid pretty much apart from the last two holes,” a philosophical Ko said. “It was a tough finish but overall my game was solid and there were a lot of positives coming from two good finishes to give me the confidence coming into this week.

“I had hoped a few more putts would have dropped but I think I am saying that almost every week. There’s always something left to improve.

“But overall the crowds here this week were really the cool aspect for me I don’t get to come home very often – but it gave me goosebumps and made me proud to play this event and have it as a LPGA event.”

The leading amateur was New Zealand-based Korean Ayean Cho who was tied for 17th on six-under par.