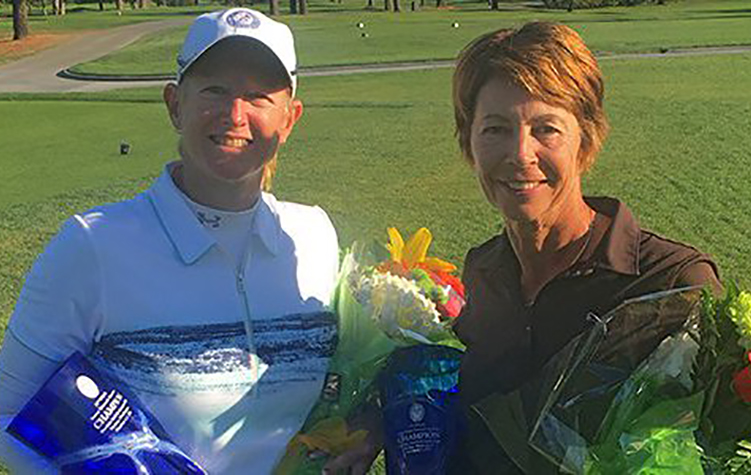 Medina, Wash. - Anita Wicks of Roseburg, Ore. survived a two-hole playoff to successfully defend her title at the 31st Pacific Northwest Senior Women's Amateur; while Holly Horwood of Vancouver, B.C. won the 6th Super Senior Women's Amateur, shooting the low round of both championships in the final round to claim the title.

Both championships were contested over 36 holes of stroke play and were held concurrently at Overlake Golf and Country Club in Medina, Wash. They were conducted by the Pacific Northwest Golf Association (PNGA).

Wicks led in both rounds of the Senior Women's Amateur. She opened with a 2-over 75 in yesterday's first round on the par-73 layout, holding a slim one-shot lead over four competitors on a crowded leaderboard heading into today's play.

The 333-yard par-4 18th was the wild and pivotal hole of the championship. Wicks, Leslie Folsom, Ginny Burkey and Victoria, BC's Alison Murdoch were paired in the same group, with Sandra Turbide of Maple Ridge, BC playing in the group behind them.

"Yesterday, everything kind of went my way," Wicks said. "The putts were falling, and I was chipping well. Today, it seemed like I was burning the edges all day, with no putts going in. I was just trying to play my game and not over-think everything. I was really shocked to be in the playoff."

In the playoff with Leslie Folsom of Tukwila, Wash., Wicks was able to save par on the first extra hole to extend the playoff. "On the second hole, I played it just like I played it earlier in the day, a drive and a wedge, and two-putted for par." When Folsom couldn't get up-and-down to save par, the title belonged to Wicks.

"I didn't think too much about trying to defend my title," Wicks said. "We all started at square one this week, and I just wanted to go out and try hard."

In 2016, Wicks was named the PNGA Senior Women's Player of the Year.

In the Super Senior Amateur, Horwood had started the day's final round tied for the lead at 7-over with Sue Ursino of Sammamish, Wash. But Horwood proceeded to shoot the round of the championship, a 1-under 72 on the par-73 layout, with five birdies against four bogeys. It was the only round under par of either championship. She won by an astonishing nine shots over second-place finisher Phyllis Laschuk, also of Vancouver. Last year, Laschuk finished second in the Senior Women's Amateur.

Of her great second round, Horwood said things went her way. "No doubt," she said. "If I happened to hit a shot in the trees I had a clear shot out, if I was headed for a bunker the ball stopped short. It was that kind of day. I made some nice putts, and I kept my head from a mental standpoint, was able to stay on an even keel."

Next year Horwood will attempt to defend her title when the championship will be held at Shaughnessy Golf and Country Club in Vancouver, B.C., Horwood's home club. "I hope to see everyone there, it's going to wonderful."

To stay connected with the championships on social media, follow @PNGALIVE on Twitter for updates and use the hashtag #PNGASrWomensAm.