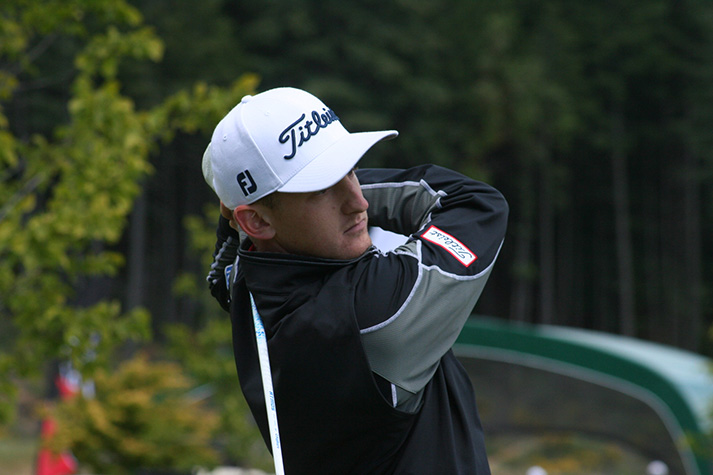 Du Toit fired a four-under 67 in Sunday’s final round of the $200,000 Mackenzie Tour-PGA Tour Canada event at Gallagher’s Canyon Golf & Country Club to finish at 16-under par. That left the 23-year-old four strokes behind winner George Cunningham of Tucson, Ariz.

“I feel very positive,” du Toit said. “I was up on the leaderboard pretty much all week it felt like. And to be there and to be in the mix basically until I made a bogey on 16 felt good. My old college coach used to say the main goal is to be in the mix on the back nine on Sunday and I did that today, so I am pretty optimistic about where things are at.”

Du Toit earned $8,000 for his fifth-place finish. He also earned another $2,500 for being the Freedom 55 Financial Canadian player of the week.

Du Toit was also in the hunt the previous week in Victoria. He was tied for third heading into the final round there, but struggled to a final round of five-over 75. He liked the way he hung in there this time on Sunday.

“Absolutely, I’ve been in the mix seven of my eight rounds the last little while and these guys are pretty good out here so I am pretty happy with all that and hopefully I can continue the trend, keep getting in the mix and keep knocking on the door for that elusive victory.”

JUNIOR BOYS STRUGGLE:  Victoria’s Nolan Thoroughgood fired rounds of 75, 79, 68 and 78 to finish eight-over par and tied for 35th place at the Toyota Junior Golf World Cup in Japan. Thoroughgood’s score was the best for the Canadian boys’ team, which finished a disappointing 14th in the 15-team field.

Denmark finished 23-under to beat Spain by two shots. The Canadian boys finished 22-over. The Canadian girls fared considerably better, finishing tied for third at two-over par. Japan won by 10 shots with a winning score of 22-under.

OPEN AND SHUT: When Abbotsford’s Adam Hadwin finally missed a cut, he missed it big. Hadwin entered the U.S. Open at Shinnecock Hills tied with Dustin Johnson for the PGA’s TOUR’s longest streak of consecutive cuts made. That streak ended at 19 when Hadwin fired rounds of 83 and 75 and missed the cut by 10 shots.

After that rough first round, Hadwin had some fun on Twitter poking fun at himself. When some wise guy tweeted that Hadwin was only 14 shots off the lead, Hadwin responded with a tweet saying: “I’ve got them right where I want them!”

Hadwin is in the field for this week’s Travelers Championship in Cromwell, CT. Fellow Abbotsford native Nick Taylor will also play in the Travelers, which was won last year by Jordan Spieth.

TITLE DEFENCE:  Surrey’s Karen Pultz will be back to defend her title at this week’s B.C. Senior Women’s Championship at the Crown Isle Golf Resort in Courtenay. Pultz beat Vancouver’s Holly Horwood in a playoff to win last year’s title at Sunshine Coast Golf & Country Club. Pultz, a longtime member of Peace Portal Golf Club, also captured the Super-Senior Crown for golfers aged 60 and over. The 54-hole tournament begins Tuesday at Crown Isle with 78 women registered to play.

THIRD AT GLENCOE:  Victoria junior Jeevan Sihota and Scott Kerr of Vancouver tied for third at the Glencoe Invitational in Calgary. Sihota and Kerr finished the 54-hole event at six-over par. That was five shots behind winner Etienne Paipineau of St-Jean-sur-Richelieu, Que.

PORTER CUP:  Hannah Lee of Surrey tied for 13th at the Porter Cup at Niagara Falls Country Club in Lewiston, N.Y. Lee finished the 54-hole event at six-over par. That was 14 shots behind winner Zoe-Beth Brake of Hilliard, Oh. Brake won by three shots over Maddie Szeryk of London, Ont. Delta’s Mary Parsons finished tied for 20th at 11-over, while Naomi Ko of Victoria tied for 25th at 12-over.

CUTTING BACK: We won’t be seeing quite so much of Vancouver’s Ryan Williams on this year’s Mackenzie Tour-PGA Tour Canada circuit.  Williams has been a fixture on the Mackenzie Tour since its inception in 2013 and has always played a full schedule. But he said that’s going to change this year. “I'm doing things differently this year,” Williams said during the GolfBC Championship in Kelowna.

“I am not revolving my life around the tour. I am not playing in Lethbridge (this week). I am taking more time off. Williams said he wants to be fresh for the Web.com Tour qualifying school in the fall. I'm only playing three in a row and I'm playing the courses I like and have had success at because it really is about winning here. I played all the events the previous few years and it is very expensive to do and the most important thing for me is I want to ready for Web.com Tour Q-School at the end of the year. I want to make sure I have enough energy for that.”

Williams shot a five-under 66 Sunday to finish tied for 30th at eight-under par at the GolfBC Championship.

NEW CHARGERS BOSS:  Doug Hastie has been named head golf coach of the Camosun College Chargers. Hastie is a familiar face in B.C. golf circles. After beginning his career at The National in Toronto, Hastie moved west and worked at Westwood Plateau in Coquitlam and the Musqueum Golf Club before heading to Vancouver Island to manage Highland Pacific in Victoria. More recently, he has served as a teaching pro at Cordova Bay and Bear Mountain.

PRO-AM RETURNS:  Tobiano in Kamloops is bringing back its popular pro-am tourney. The 36-hole event is scheduled for Aug. 18-19 and will feature a $25,000 amateur prize pot and a $25,000 pro purse. Teams will consist of three amateurs and one professional. Entries are $375 or $1,350 for a four-person team. Registration deadline is July 31. Visit tobianogolf.com for more information.