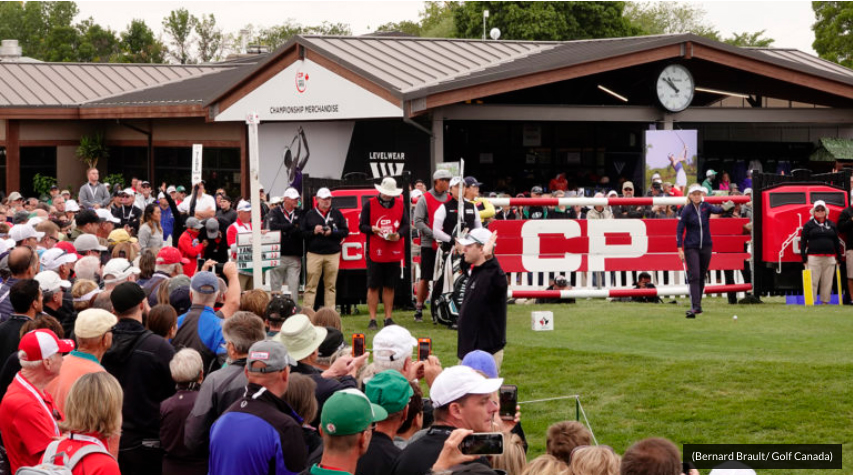 In a year that saw 10 Rolex First-Time Winners added to the roster of LPGA victors, the 2018 LPGA Tour season produced 26 winners from 10 countries across 32 official tournaments. Powered by determination, athleticism and a drive for greatness, the 2019 season promises to continue the upward growth of the world’s best female golfers.

The 2019 LPGA Tour schedule will include 33 official events, plus the biennial Solheim Cup, which pits the 12 best players from the United States against their European counterparts. The Tour will visit 15 states and 12 countries (including the United States), with a record $70.55 million in official prize money.

“We are in one of the most exciting periods of time in LPGA history,” said LPGA Commissioner Mike Whan.

“One look at our 2018 season shows the breadth of global talent on our Tour, and I have no doubt that 2019 will continue this upward trend. We are not only proud of our Tour growth, but also the growth of our LPGA Teachers, LPGA Amateurs and LPGA-USGA Girls-Golf efforts.”

In a sign of the continued strength of the women’s game, the 2019 season will see $70.55 million in prize money, up from $65.35 million in 2018. The season’s largest purses come at the U.S. Women’s Open Championship, conducted by the USGA, and the season-ending CME Group Tour Championship, both with $5 million at stake.

While the USGA will not confirm their 2019 purse until April 2019, they have confirmed the purse will be $5 million at a minimum. The CME purse will double from $2.5 million to $5 million, with the winner earning $1.5 million, the largest single prize in the history of women’s golf.

“LPGA purses have steadily increased over the last decade, a sign of the growing support from our corporate partners and sponsors for the game of women’s golf,” said Whan. “Across the board, our title sponsors understand the value that working with LPGA players brings to their businesses and we look forward to continuing to develop larger purses for the generations of players to come.”

The 2019 season features four new tournaments, including consecutive inaugural stops to begin the year’s travel around the world. The Diamond Resorts Tournament of Champions presented by Insurance Office of America, to be held Jan. 17-20 at Four Seasons Golf and Sports Club Orlando in Lake Buena Vista, Fla., promises to be a week of world-class competition and entertainment. LPGA Tour winners from the last two seasons will play alongside celebrities from the sports and entertainment worlds.

From there, the Tour heads Down Under, joining the European Tour at the Vic Open on Feb. 7-10 at 13th Beach Golf Links in Barwon Heads, Australia. The event marks the only professional golf tournament where men and women compete concurrently on the same course and for the same prize money. The Vic Open makes the ideal partner to the ISPS Handa Women’s Australian Open, which the following week returns to the Grange Golf Club in a three-year rotation of Adelaide’s golf courses.

The LPGA’s newest stop in the Republic of Korea, the BMW Ladies Championship, takes the Tour to Busan and LPGA International Busan, the LPGA’s first golf facility outside the United States. It is the second stop on the LPGA’s annual Fall Asian Swing, which also takes the Tour through the People’s Republic of China, Chinese Taipei and Japan.

“I’m truly excited that three of our new tournaments for 2019 will feature formats that are new to the LPGA,” said Whan. “We’ve long wanted to get a Tournament of Champions back on the LPGA schedule, and this partnership with Diamond Resorts will definitely make the Four Seasons Orlando the place to be in January. Plus, our friends at Dow, long known for their scientific innovation, have brought that trait to the LPGA by bringing together this great team event. I can’t wait to see how the players will partner up over the coming months. Additionally, the Vic Open will showcase a joint men’s and women’s event that is interesting to players and fans, not to mention timely in the world of equal opportunity and pay.”

Three season-long races will also build anticipation and excitement for players and fans alike. The Aon Risk Reward Challenge, a new competition on both the PGA and LPGA Tours, will feature the world’s best golfers as they navigate risk across the season’s most strategically challenging holes. The player from each Tour on top of the Aon leaderboard at the end of the regular season will each receive $1 million.

The Race to the CME Globe is evolving in 2019, with the top 60 players following the Blue Bay LPGA heading to the CME Group Tour Championship with the opportunity to win the $1.5 million winner’s check. In its second year, the LEADERS Top-10s competition will award $100,000 to the player with the most top-10 finishes, with Ariya Jutanugarn taking the inaugural title in 2018.

The LPGA Tour will see 450 hours of domestic broadcast coverage on Golf Channel and network TV in 2019, with more than 475 hours available in 175 countries around the world.

One stop on the 2019 schedule is still to be announced, as the contractual agreement for that event is not yet completed. That is expected to be finalized early in 2019, so players and fans should reserve one more week for an additional exciting Tour stop.

Click HERE for more on the LPGA upcoming season schedule. 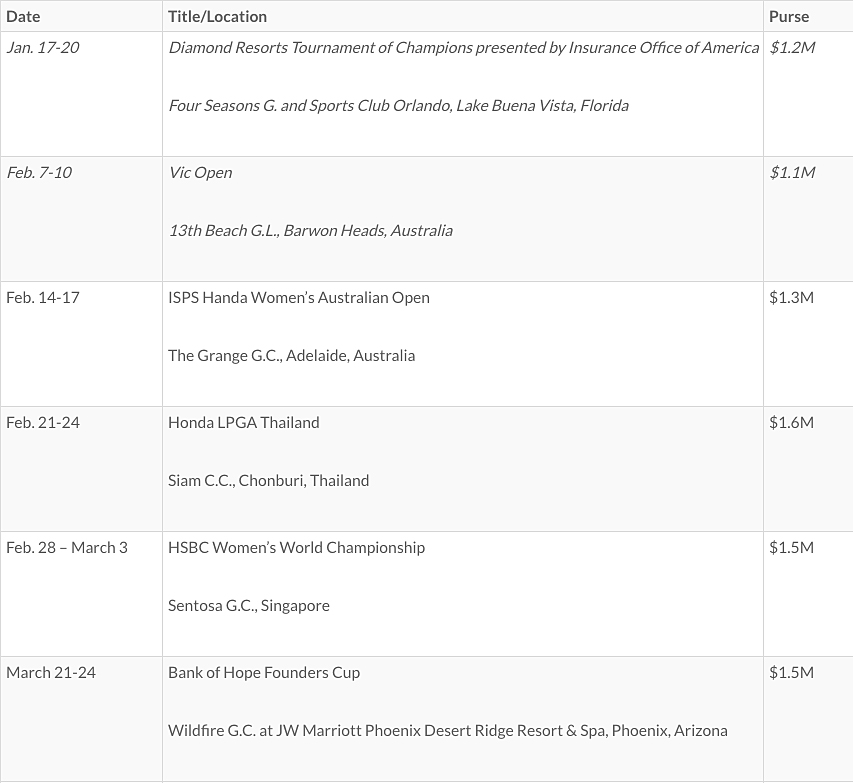 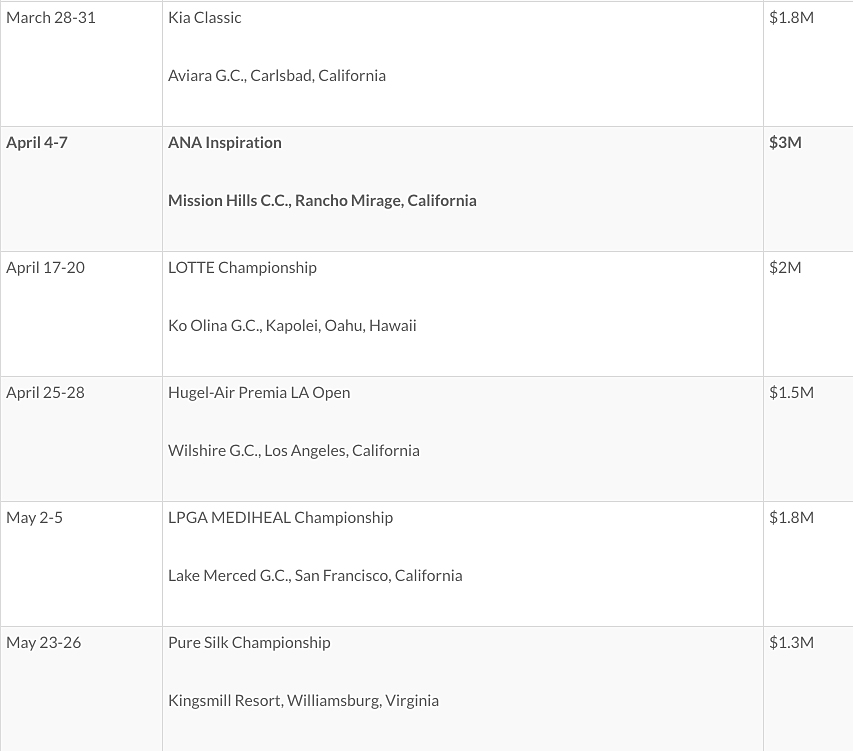 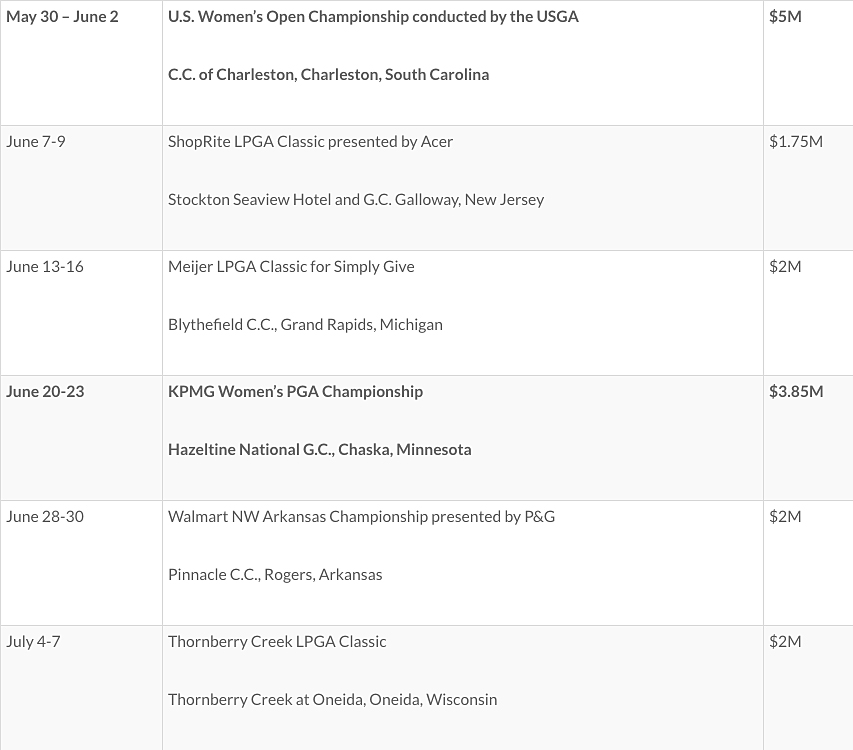 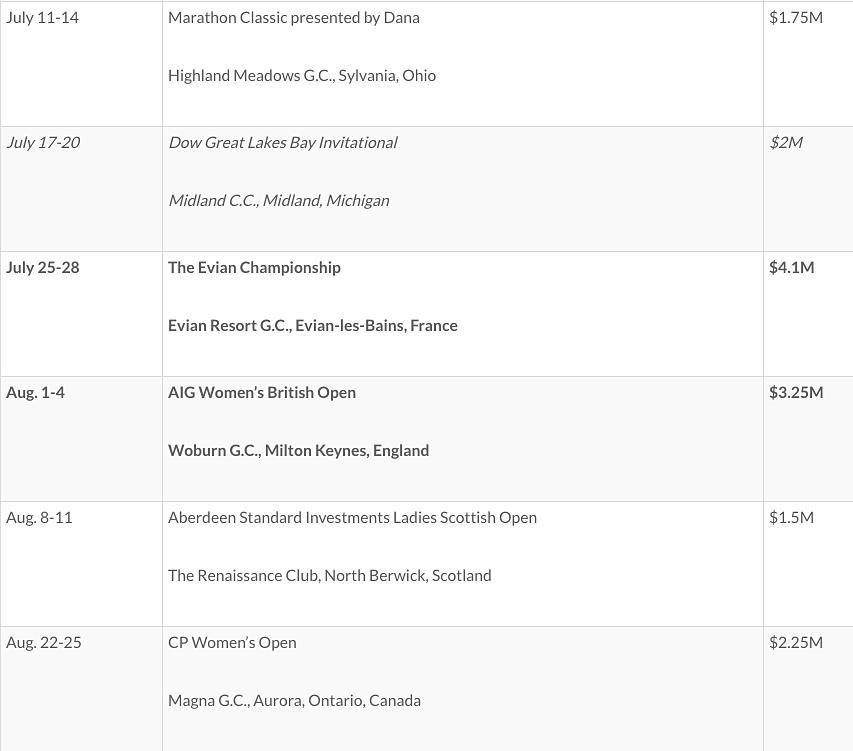 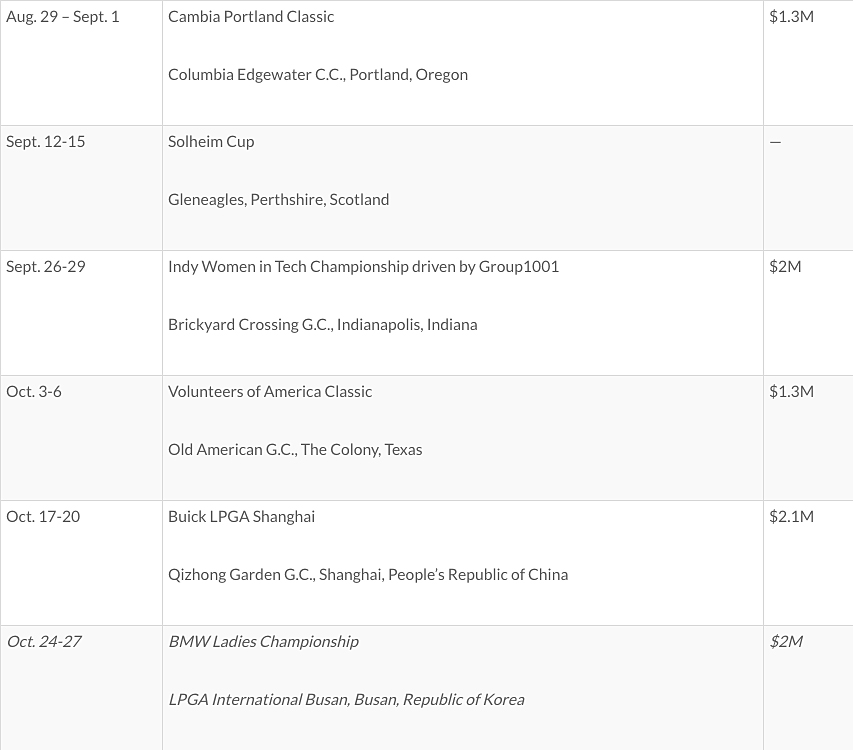