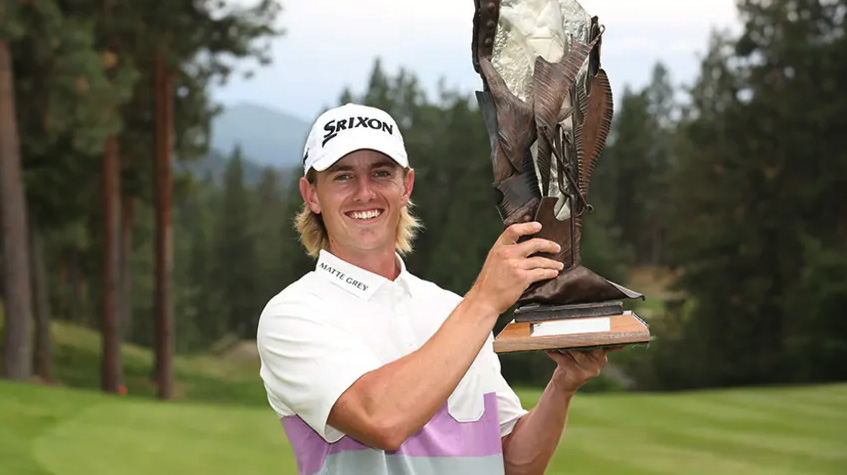 It's Two Out Three In B.C. For California's Jake Knapp As He Took The GolfBC Championship Title To Go Along With His Win In The Season Opener At Point Grey G&CC - Image Credit Chuck Russell/Mackenzie Tour

The guy who shot 59 didn’t win. Greyson Sigg of Augusta, Ga., had to settle for third place after he scorched Gallagher’s Canyon Golf & Country Club with a 12-under 59 in Sunday’s final round of the GolfBC Championship.

It was only the second 59 recorded since the PGA Tour Canada-Mackenzie Tour circuit started in 2013. Sigg finished the final event of the Mackenzie Tour’s British Columbia Swing at 17-under par. That was three shots behind winner Jake Knapp of Costa Mesa, Calif., who closed with an eight-under 63.

The victory made Knapp a two-time winner on tour this year. He won the Mackenzie Tour’s season-opening Canada Life Open at Point Grey Golf & Country Club last month in Vancouver. “I want to try and win every single week,” said Knapp who now leads the Order of Merit with $72,000. “Realistically, you are probably not going to, but I am going to give myself a chance.”

BONUS BUCKS: Only four Canadians -- all British Columbians -- made the cut in Kelowna. Riley Wheeldon finished as low Canadian. The Comox native tied for 22nd place at nine-under par after closing with an even-par 71 on Sunday. Wheeldon earned a $2,500 bonus from Canada Life as the low Canadian.

BIRDIE BINGE: He didn’t make the cut but Kelowna junior Cooper Humphreys put on quite a show in the second round of the GolfBC Championship. Humphreys, who recently turned 14 and is just finishing Grade 8 at Aberdeen Hall Preparatory School, received a sponsor’s exemption into the event by winning the Zone 2 Junior Tour Order of Merit.

After firing a five-over 76 in the first round, Humphreys triple-bogeyed two of the first four holes of his second round. It looked like he was heading for a big number, but Humphreys had other ideas. He ended up recording eight birdies that day and shot 30 on the back nine at Gallagher’s Canyon to finish the day with an even-par 71. “I am feeling pretty good about the back nine and I am happy I was able to grind out a good score,” he said after the round.

Humphreys will compete next month in the B.C. Junior Boys Championship at Fairwinds Golf Course in Nanoose Bay.

EXTENSION SIGNED: GolfBC announced it has signed a multi-year extension with the PGA TOUR to continue its sponsorship of the tournament. The event has raised $600,000 for charity in its first four years. “We are excited to extend GolfBC's commitment to host such a prestigious event in the Okanagan,” said Andy Hedley, vice president of golf operations for GolfBC Group.

“Philanthropy is a large focus for our companies, and we are proud that with the support of GolfBC's charitable arm, the Chan Family Foundation, the GolfBC Championship has grown to be one of the most charitable events on the Mackenzie Tour."

OPEN SEASON: Abbotsford’s Nick Taylor closed with a one-over 72 to finish two-over par and tied for 43rd at the U.S. Open at Pebble Beach Golf Links. Taylor and Mike Weir were the only Canadians to qualify for the event. Weir missed the cut.

Taylor moved up three spots to No. 104th on the FedEx Cup points list. Taylor and fellow British Columbians Adam Hadwin, Roger Sloan and Adam Svensson are in the field for this week’s Travelers Championship at TPC River Highlands in Cromwell, Ct.

All that work South African Louis Oosthuizen did at Tobiano in Kamloops last week appeared to pay off. Oosthuizen, who has a sister in Kamloops and is a frequent visitor to the area, tied for seventh at Pebble Beach.

JUNIOR ACHIEVEMENT: Victoria’s Jeevan Sihota shot a seven-under 65 that featured a 31 on the front nine to earn medalist honours at a U.S. Junior Amateur qualifier at Sunnyside Country Club in Fresno, Calif. Sihota, a member of Canada’s National Junior Team, had eight birdies and just one bogey in his round. This year’s U.S. Junior Amateur goes July 15-20 at Inverness Club in Toledo, Ohio.

CHIP SHOTS: Justin Shin of Maple Ridge tied for 32nd at the Suzhou Open on the PGA TOUR China circuit. Shin completed the event at 6-under par. That was 12 strokes behind the winner, Cyril Bouniol of France. . .Andrew Harrison, the Camrose, Alta., native who just finished his collegiate golf career at the University of B.C., won the Alberta Open by five shots with a winning score of 14-under par in the 54-hole event at Trestle Creek Golf Resort in Entwistle, Alta.