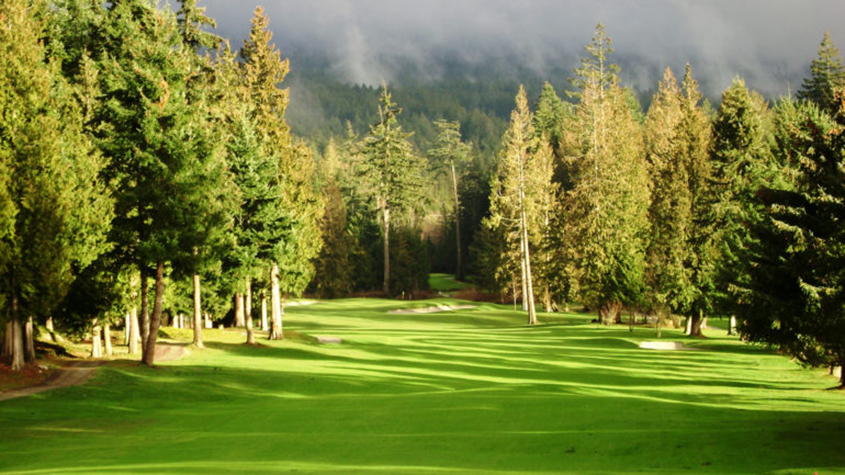 Sunshine Coast Golf & Country Club was built in large part thanks to the contributions of many volunteers who donated their time, energy, resources and whatever else was necessary to make the course a reality. Fifty years later, as the club celebrates it golden anniversary, not much changed.

That same community spirit remains a big part of a course that certainly has to be regarded as one of British Columbia’s hidden gems. Sunshine Coast G&CC is blessed with a gorgeous landscape that makes a round feel a little like a walk in the park. But Jim Pringle, the longtime director of golf and head professional, thinks the real strength of the course are its members.

“I have always thought the greatest thing about this club is the members don’t spend a lot of time looking over the fence to compare themselves to anybody else,” Pringle says. “They love what they’ve got, they know we are a small community and it is a real special place and they love it as it is. I love that attitude.

“The second part of it is so many of them are always willing to step up and volunteer for club projects or whatever. That started from the beginning when members put metal pails on their pull carts and picked rocks as the golf course was just getting going.”

Pat Gaines, the current club president, played his first round as a junior member in 1971 as a 12-year-old. His parents were both original members and Gaines knows how much of a community project the course was in its infancy. Sunshine Coast G&CC opened June 1, 1969 as a nine-hole layout. Designed by Vancouver’s Ernie Brown, it truly was a labour of love.

The course was built on about 50 acres of what used to be the Morrison farm in Roberts Creek. The idea of building a golf course was hatched by a group of about 10 local businessmen, Gaines says.
“They sat down and said 'this is how we are going to make it work' and there was a community spirit to make it work,” Gaines says.

The original course was a huge success, boasting as many as 700 members in its early years. “People joined who didn’t even know how to play golf, but they learned,” Gaines says. “They came for the camaraderie, for the sport, for the exercise and actually got wrapped up in the volunteerism as well.”

A second nine, routed by Les Furber and shaped and constructed by Russ Olson, opened for play in 1996. In 2006, a practice facility was completed, improvements were made to the clubhouse and the first hole was lengthened. That first hole and holes 11 through 18 were the original nine holes. Holes 2 through 10 are the new ones. Together they are a course that plays much tougher than the scorecard might indicate.

Stretched to its tips, Sunshine Coast measures 6,357 yards. Three other sets of tees range from 4,669 to 5,938 yards. That yardage is deceiving. Sunshine’s Coast’s defence are its greens, full of humps and bumps that put short games to the test. Just try playing here without three-putting at least one or two greens.

“I think that is one of the charms of the golf course,” Pringle says. “The distance is not excessive, so it kind of brings everyone into play, but chipping and putting is definitely the challenge. It makes it a lot of fun.”

The setting is truly special. The course meanders through stands of timber and offers some stunning mountain and ocean views. “I think what makes it such a great experience is that outside of a few houses down the left side of the first fairway the entire golf course is virtually surrounded by a park, so you get that full natural experience,” Pringle says. “I think it is the classic kind of West Coast golf experience.”

These days, Sunshine Coast Golf & CC is getting an increasing amount of out-of-town play. “Tourism across the Sunshine Coast is continuing to grow and a huge part of our summer business is vacation golfers,” Pringle says. “Just under half of our play is non-member golf.”

A 50th birthday would not be complete without a party and Sunshine Coast Golf & CC has a big one planned for Saturday, June 29 to mark the occasion. The club’s 300 members are being invited to come out and play the original nine holes that day.

“We are going to use some of the old tee boxes that are still there, but they are kind of hidden now after all these years,” Gaines says. “So we’ll play the original nine and then we’ll come in and have a big party up on the deck with dinner and dancing.”