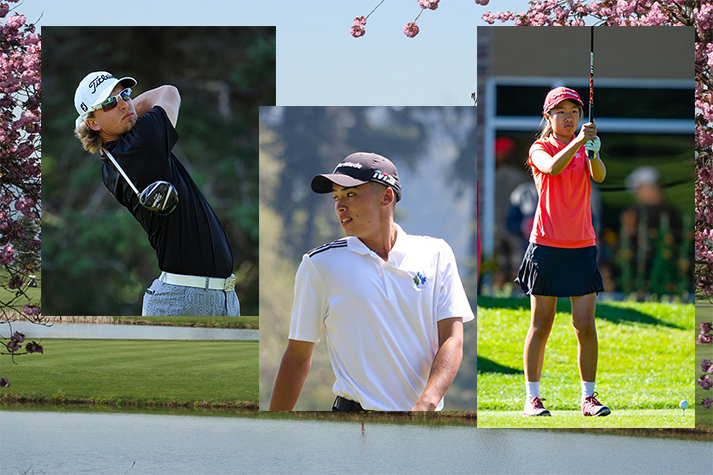 It is turning into a 'super summer' for Merritt’s Roger Sloan, who posted another top-10 finish Sunday on the PGA TOUR . Sloan tied for seventh at the Barracuda Championship in Reno, Nev.

In his last four events, Sloan has finished tied for 21st, T15, T10 and T7. He seems to have his game in solid shape with the PGA TOUR’s FedEx Cup playoffs set to start in two weeks.

Sloan finished with 37 points at the Barracuda, an event that uses the Stableford scoring system. That was 10 points behind winner Collin Morikawa, a rookie from Los Angeles. The nice finish in Reno moved Sloan up 13 spots on the FedEx Cup points list to 91st.  Surrey’s Adam Svensson finished 65th in Reno, but dropped five spots on the FedEX Cup list to 171st.

The PGA TOUR regular season wraps up at this week’s Wyndham Championship in Greensboro, N.C. The four British Columbians who are PGA TOUR regulars -- Sloan, Svensson, Adam Hadwin (No.41 on FedEx list) and Nick Taylor (No. 114) -- are all scheduled to play at the Wyndham.

All but Svensson have their PGA TOUR exempt status locked up for next year. Svensson would need a huge finish at Wyndham to get inside the top 125.

But if he could play his way inside the top 150, he would be guaranteed a dozen or more starts next year on the PGA TOUR. Svensson will also have an opportunity to play in the Korn Ferry Tour Finals, a three-tournament series in August where 25 additional PGA TOUR cards will be available.

AMATEUR HOUR: Coquitlam’s A.J. Ewart beat fellow amateur Ryan Stolys on the first hole of a sudden-death playoff to win the 50th playing of the Golden Ears Men’s Invitational at Pitt Meadows Golf Club.
Ewart and Stolys, an Ontario native who is a member of the Simon Fraser University men’s golf team, finished the 36-hole event at six-under par.

Ewart, a Gleneagle High School graduate, is off to Barry University in south Florida this fall to begin his collegiate golf career. An amateur had not won the Golden Ears Invitational since 1995. Craig Titterington of Pitt Meadows Golf Club and Riley Lamb of Meadow Gardens Golf Course were the low pros at four-under par. They each took home $1,700.

LPGA CALLING: Vancouver’s Michelle Liu has become the youngest player to earn an exemption into the CP Women’s Open. The 12-year-old Liu, who plays out of Shaughnessy Golf & Country Club, earned a spot in next month’s LPGA Tour event by finishing as the low Canadian at last week’s Canadian Women’s Amateur Championship at Red Deer Golf & Country Club in Alberta.

Liu finished the 72-hole event at one-over par and tied for 12th place. Liu will be aged 12 years, nine months and six days when the CP Women’s Open tees off on Aug. 22 at Magna Golf Club in Aurora, Ont. “I’m very proud of myself, especially being able to play with so many well know professional players,” Liu said. “I started off not very well -- at three-over through four holes -- and I was like, ‘oh, this may not happen.’ I managed to get back and get my scoring under control.”

Vancouver’s Tiffany Kong was the only other British Columbian to finish inside the top 20. Kong tied for 18th at four-over par. British Columbia’s team of Angel Lin of Surrey, Alisha Lau of Richmond and Euna Han of Coquitlam finished second, two shots behind Ontario, in the inter-provincial team competition.

OFF TO LETHBRIDGE: Liu will be playing this week in the Canadian Junior Girls Championship at Lethbridge Country Club in southern Alberta. The 72-hole competition begins Tuesday and Celeste Dao of Quebec, who won last year’s championship at Beach Grove Golf Club in Tsawwassen, is defending her title this week.

THE MAC IS BACK: After a one-week hiatus, the PGA Tour Canada-Mackenzie Tour returns to action this week in Edmonton at the 1932byBateman Open. British Columbians in the field include Langley’s James Allenby, Jared du Toit of Kimberley, Riley Wheeldon of Comox, Mike Belle of Burnaby and Zach Anderson of Nanaimo.