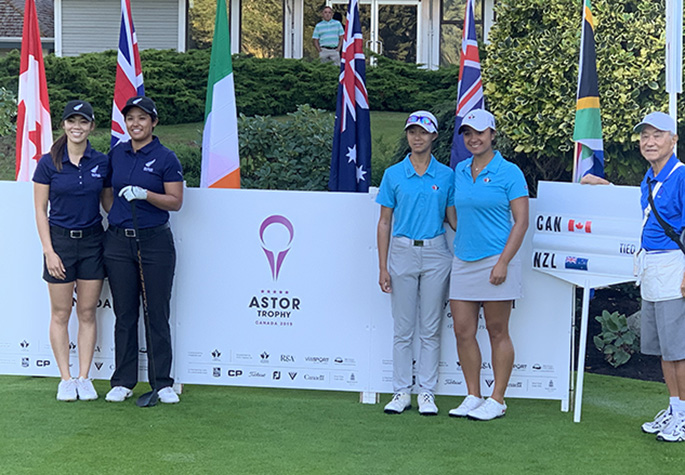 VICTORIA -- Indonesia, Thailand, the Philippines, Argentina, Guatemala, Mexico, Puerto Rico and Peru. Those are some of the places golf has taken Delta’s Mary Parsons the last few years.

This week is not quite as exotic. The 20-year-old Parsons is a member of Canada’s four-woman team at the Astor Trophy competition being held at Royal Colwood Golf Club. She only had to hop on a ferry to get here. It is the end of what has been a hectic summer for Parsons, the 2018 B.C. Women’s Amateur champion.

The highlight of her summer came in early August when she was part of Canada’s golf team that won a bronze medal in the mixed team event at the Pan American Games in Lima, Peru. Parsons also finished fifth in the women’s individual competition in Lima.

“That was fun,” she said of her Pan Am Games experience. Unfortunately, she was not able to make it to the closing ceremonies, which were held on the same day the golf competition was wrapping up. “The men had a long playoff and we were waiting for them to finish to have our medal ceremony, so it was too late to get there,” she said.

Parsons hasn’t really struggled during the first two days of the five-day Astor Trophy competition, but she did lose the four matches she played the first two days. She refuses to use her busy summer schedule as an excuse and insists she is not golfed-out. “Yeah, I have played a lot of golf, but I am feeling fine,” she said. “For the most part I have been playing okay.  I am just not making a few putts here and there. That is mainly the difference.”

The Astor Trophy, which has been played every four years since 1959, features teams from Canada, Australia, New Zealand, South Africa and Great Britain & Ireland. Each four-woman team plays one another once during the five-day competition.  Parsons, 2019 Canadian Junior Girls champion Emily Zhu of Richmond Hill, Ont., Noémie Paré of Victoriaville, Que., and Brooke Rivers of Brampton, Ont. are representing Canada.

After being blanked in Wednesday’s opening match against New Zealand, the Canadians got on the board Thursday. They split their matches with Australia and earned half a point. The standings through the first two days of the competition have South Africa, New Zealand and Australia all tied with one point. Canada and Great Britain & Ireland each have half a point.

The 14-year-old Rivers, who is about to enter Grade 9, has been Canada’s best player thus far. She won three of her four matches the first two days. On Thursday, she partnered with Paré to win their foursomes (alternate-shot) match 2&1 over Australians Amelia Mehmet-Grohn and Kirsty Hodgkins.

After a quick lunch, Rivers then went out and beat Australia’s Emily Mahar 2-up in their afternoon singles match. “I am having so much fun,” Rivers said. “It is such a great learning experience, playing with people from different countries. Most of them are in university or finishing university. I can learn so much from them. It has been an incredible experience.”

Canadian coach Matt Wilson was delighted to see his team get on the board after being blanked on Wednesday. “It’s definitely helpful to get on the board in the first couple of days,” Wilson said. “We have a rest day Friday where we can do a bit of work and rest up and prepare for the final two days because they are going to be pretty tough.”

Each team gets one day off during the competition. Canada’s day off is Friday, when South Africa will play New Zealand and Great Britain & Ireland face Australia. The competition ends Sunday and on Monday Parsons will head back to Indiana University, where she is heading into her junior year.

She will have missed the first week of classes as the fall semester began this past Monday. Parsons is majoring in biology and quickly learned that she had to manage her time well as a student-athlete. “It is just about sticking to a schedule and getting what needs to be done on time,” she said. “I usually try to get my homework done before we hit the road, so when we are away I don’t have to do much.”

The Astor Trophy began as the Commonwealth Trophy and was first held at The Old Course at St. Andrews, Scotland in 1959. The name was changed to the Astor Trophy in 2007 to allow Irish players to compete on a Great Britain & Ireland team.

Australia won the event when it was last contested in 2015 at the Grange Golf Club in southern Australia. Canada has won the Astor Trophy on two occasions, in 1987 and 1979.