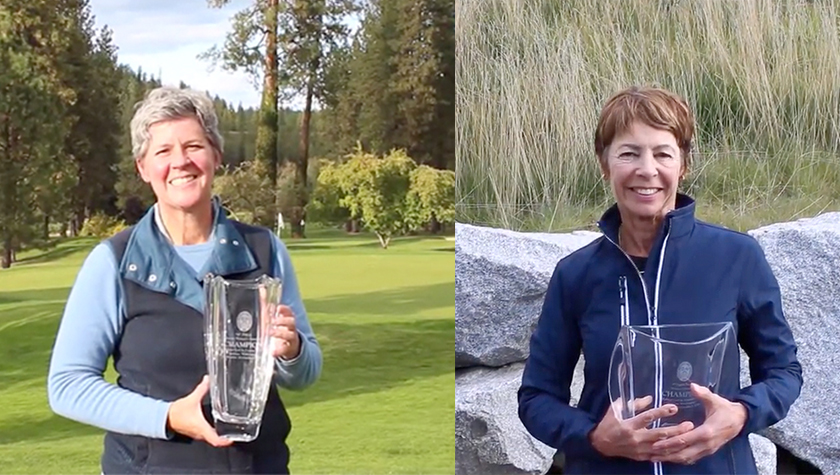 Both 36-hole championships were held concurrently this week at Kalispel Golf and Country Club in Spokane, Wash., and were conducted by the Pacific Northwest Golf Association (PNGA).

Visit thepnga.org for complete final scoring of both championships.

In the Senior Women’s Amateur, Folsom went wire-to-wire in her victory, taking the lead in yesterday’s opening round with an even-par 73, which turned out to be the best round of the two-day championship. Folsom finished one shot ahead of second-place finisher Karen Darrington of Boise, Idaho.

Folsom was named last year’s Washington Golf Senior Women’s Player of the Year. Earlier this summer, she played in the U.S. Senior Women’s Open. “This is huge to have an individual PNGA Championship,” said Folsom.

“I said to the crowd, I was kind of gobsmacked to be with the same names as Holly (Horwood), Alison Murdoch, Kareen Markle, Leilani Norman, Marcia Fisher, was in the room with us today. Just to be with those players is pretty incredible.”

Horwood has now won three titles in a row in the Super Senior. She began today’s final round in third place, three shots back of first-round leader Phyllis Laschuk, also of Vancouver. But Horwood’s solid round of one-over par 74 pushed her to the top of the leaderboard. Laschuk finished the championship in second place, four shots back of Horwood.

Horwood was inducted into the Golf Hall of Fame of BC in 2017. “I wanted to play well today, but I just kept rolling,” said Horwood. “I just didn’t seem to make any mistakes, I sank a lot of putts that I needed to.”

“It’s a bit of a surprise actually. I thought it was Phylis’ turn this year,” said Horwood When asked about how it feels to win her third title, “I know she’s a champion in so many ways and will be here for sure next year.”