Tiger Woods In Contention After Farmers Insurance Open First Round 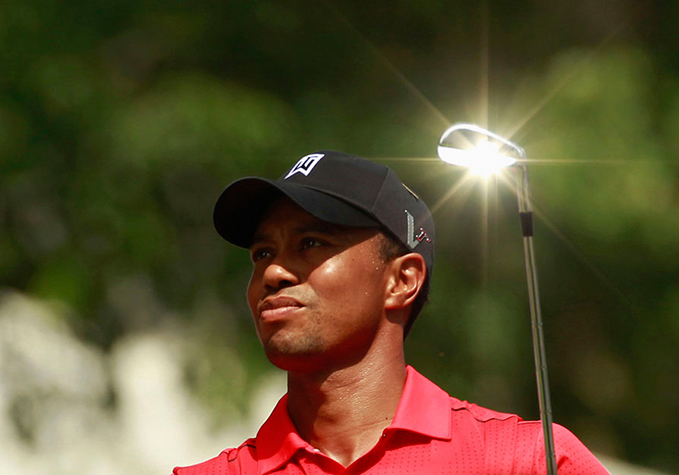 Look at the top of the leaderboard after Round 1 of the 2020 Farmers Insurance Open and you will see co-leaders Sebastian Cappelen (South Course) and Keegan Bradley (North Course) at (-6) 66, one shot ahead of a raft of golfers on a day where more than half the field shot par or better.

But it’s the guy who shot a (-3) round of 69 on the North Course that has the large San Diego golf crowds captivated and enthralled by the majestic golf game of Tiger Woods.

Woods began his day off the 10th tee of the North Course, failing to make birdie at the easy 10th before chipping into a bunker on the 11th en route to a bogey. Birdies at 13 and 17 were accompanied by a bogey on 18th and Woods made the turn even par.

On his back 9, Woods made birdies at 1, 5 and 9, the latter two reachable par-5s, and Woods is solidly in contention at a place he has won seven times on the PGA Tour, once at the 2008 US Open, and lest Woods have you forget, he also won a Junior Worlds here many moons ago.

And he’s doing it with a new driver, the TaylorMade SIM, and a new golf ball.

“I drove it a little better today,” said Woods, who joked that he still can’t quite get it out there like playing partner Jon Rahm. “I was certainly able to pick up a few more miles an hour.”

As for his new golf ball, Woods said: “I felt like I picked up maybe a quarter of a club in my irons, which is nice, without sacrificing any spin around the greens. I think it’s a little better in the wind, into the wind. I don’t feel like I have to flight the ball as much as I did with my other ball.”

Rahm, who finished at (-4) 68, was one of the few golfers on the North Course who tried to drive the 322-yard 7th hole, but he could only make par after his chip from the left rough came up short.

Playing in the group in front of Woods and Rahm was Northern Ireland’s Rory McIlroy, who shot a sneakily quiet (-5) round of 67, which included par at 7, a hole he also tried to drive.

“I missed it right,” said McIlroy. “I got a little unfortunate that it hit the cart path and I had that tree in my way, but was a big up-and-down (for par) . . . That was probably the only drive that I missed today.”

McIlroy has also put a new driver in the bag, proof that TaylorMade isn’t just making waves at the PGA Merchandise Show in Orlando; it is putting new drivers into the bags of the top players in the world here in San Diego.

“I like the club,” said McIlroy, “But it sits very open and I sort of was playing ahead at a loft that looked at me like it was a little bit left . . . . the face just looked a little bit left to me. So I ended up going to a new head, a 10-and-a-half (degree driver). I’ve never played a 10-and-a-half degree driver, but I put a 2-degree sleeve in it and it’s actually playing around eight-and-a-half, but it’s opened it up two degrees so the toe is not in, it’s more out and it’s more how I like to see it. Just visually, it gives me a little bit more confidence.”

Players with sneaky good rounds include (-2) rounds of 70 on the South Course by both Jordan Spieth and Tony Finau and a (-5) round of 67 on the South by Bubba Watson.

Players with days to forget include defending champion Justin Rose, who shot (+3) 75 on the South Course. Tying him is local favourite Rickie Fowler, who is closely tied to this tournament because of his sponsorship by Farmers Insurance.

Also of note was an interesting weather system that moved into the area on Thursday afternoon which enveloped parts of the course in dense fog. Players only endured a minor delay for the fog to move on, but it is something to keep in mind with three tournament days left in the 2020 Farmers Insurance Open.

For Canadian golf fans, it’s uncharacteristically quiet in San Diego, with Ontario’s Michael Gligic low Canuck at (-1) 71 after his opening round on the North Course. Ontario’s Mackenzie Hughes also teed off the North Thursday and shot (+1) 73, which included a double bogey on his final hole. The lone British Columbian in the field is Merritt’s Roger Sloan, who shot (+4) 76 on the South Course, which included just two birdies to go with six bogeys. Saskatchewan’s Graham DeLaet had to pull out of the tournament before his Thursday round after his back acted up again.