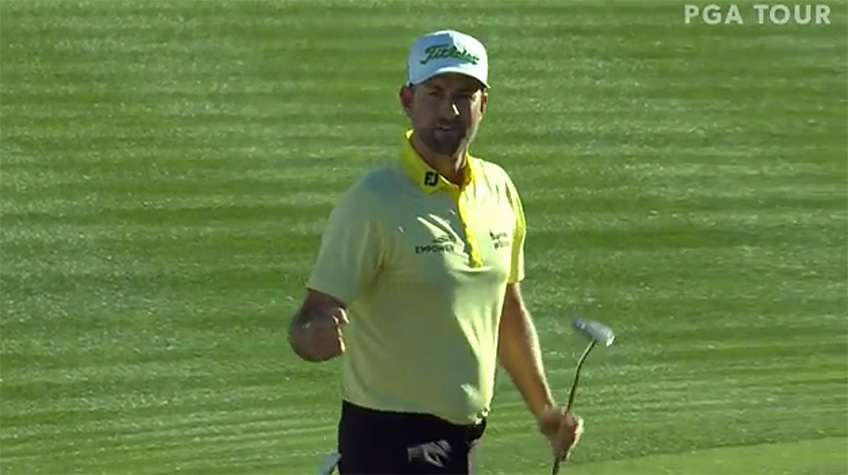 Things looked dire for Webb Simpson as he stood on the 17th tee of the final round of the Waste Management Phoenix Open. Leader Tony Finau was two strokes ahead and so confident he had the power to drive the 17th green with just a 3-wood. Finau seemed to hit a good shot, but his three-wood went just 264 yards into a rightside fairway bunker, where he would just make par.

Simpson, not known as one of the longer hitters on tour, then proceeded to put his drive on the right side of the green and a simple two-putt later, he was within a stroke.

History replayed itself on the 18th, as Simpson made birdie again to tie Finau, who could only make par, which forced a playoff.

Three years ago, Simpson saw this movie with a nightmare ending, getting into a playoff with Hideki Matsuyama before losing on the fourth extra hole.

But this year, Simpson got his dream ending, making birdie on the 18th hole for the second time in 30 minutes and third consecutive birdie in the last hour to nip Finau, who could only make par and a champion was crowned in Phoenix with ample time for football fans to see the San Francisco 49ers play the Kansas City Chiefs in Miami.

Simpson’s win marks the fourth time in five years that the Waste Management Phoenix Open has ended in a playoff. Matsuyama won in both 2016 and 2017 before Gary Woodland won in 2018. Rickie Fowler won in the regulation 18 holes last year.

As the sun sets on another successful Phoenix Open, it is time to empty the notebook of notable things that occurred this week that didn’t make the daily recap, but are notable nevertheless.

On Friday, following the group with Abbotsford’s Nick Taylor and Thailand’s Kiradech Aphibarnrat was another Thai golfer carrying a large Callaway golf umbrella. Ariya Jutanugarn was watching her countryman and it was stunning that few in the crowd recognized one of the world’s best female golfers. Since many golf professionals live in the Phoenix area, there were probably many more LPGA players here to see the best in the world play, but they also went unrecognized.

And here is a shout out to a Vancouver Golf Tour and PGA of British Columbia professional who is doing all the right things with little fanfare or recognition. Kevin Stinson has a very small profile on the PGATour.com website, which notes he played in the 2014 Canadian Open, missing the cut after rounds of 74 and 79.

Well, Stinson is also paying it forward, offering his couch to a couple of aspiring young B.C. professionals who shall remain nameless. Stinson credits Ray Stewart and Phil Jonas for looking out for him when he was a young golfer straight out of Wayland Baptist University in Texas. Perhaps those two are the next Taylor or Hadwin and if so, they have Kevin Stinson to thank for offering a helping hand.

Hadwin accepted the jeers on the raucous 16th hole as he made bogey out of the third group to play there Sunday. After hitting his tee shot into the rear greenside bunker, Hadwin knocked it out to three-and-a-half feet but he couldn’t make his par and bowed in mock surrender to the crowd after tapping in for bogey. Taylor and Conners, playing together for the second consecutive day, each made par at 16.

During a long wait on the 17th tee box, a police officer was taking pictures of his partner’s child. Luke List of Augusta, Georgia noticed this and signed a glove for the young girl. Further on down the 17th fairway, List’s playing partner Jon Rahm was walking to the 18th tee when he noticed his new wife Kelley just outside the ropes talking to a police officer. “You want to walk the final hole inside,” Rahm asked his new wife. And with that, Kelley Rahm walked up the right side of 18 with the police officer.

Hadwin and Taylor won’t arrive at Pebble Beach until Tuesday because they have sponsor obligations in Phoenix on Monday.