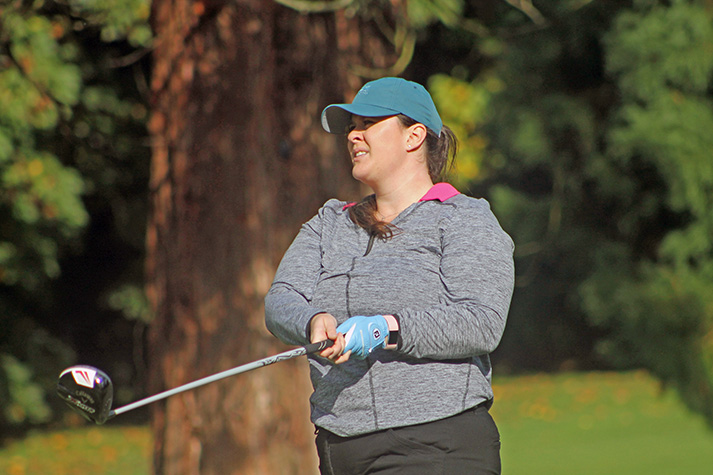 Ask Kate Weir how she got started playing golf and the new head pro at Rivershore Golf Links will tell you that she really didn’t have a choice.

Her parents golfed and they were determined their daughter would, too, so Weir accompanied them to Rossland-Trail Country Club (now called Birchbank Golf Course).

“I want to say I was seven or eight and my parents would take me out and put me in summer camps,” Weir recalls. “When we’d go to Christina Lake, we’d play there. It wasn’t really something I loved to do, but they did it. I am an only child, so I went along with them.”

A few years later, a funny thing happened. Weir fell in love with the game. “I was about 13 when I started to really like it and take it seriously,” she says. Weir has taken the game seriously ever since. She played high school and junior golf and competed at the collegiate level at both the University of B.C. and Douglas College.

She turned pro in 2013 at Vancouver Golf Club after graduating from college and moved on to Burnaby Mountain, where she spent nearly six years.

Along the way, the Trail native earned a reputation as a young professional who immersed herself in the business. “Kate is an individual who has worked really hard,” says Donald Miyazaki, executive director of the PGA of British Columbia.

“She has expanded her knowledge in a whole variety of just different areas. Not just the business side of things, she is involved with British Columbia Golf’s coaching program as well and she has travelled to Toronto to attend PGA of Canada seminars and has become a well-rounded golf professional. So kudos to her.”

“Golf is one of my passions so learning about it is really fun for me,” Weir says. “It never felt like extra work. I know some people find that kind of stuff a bit tedious, but for me it is more fun. I enjoy meeting all the golf pros in our industry and the people who are influencing the game.”

All that extra work paid off when Weir was offered the head professional position at Rivershore, a splendid Robert Trent Jones, Sr. design in Kamloops. As good as the opportunity was, Weir acknowledges being nervous about leaving her comfort zone at Burnaby Mountain. “For sure, I was very comfortable there,” she says.

“It was a city job, so that made for a level of security. It was very busy, it was never a place I was going to stay forever. I either wanted to go down the teaching-coaching road or the head pro route and I hadn’t decided.

"It definitely took pushing to get me to come up here. Pushing from my friends in the Lower Mainland who knew this was a good opportunity and then (Rivershore general manager) Kevin Oates obviously saying 'we want you to come up here.' It was a big jump for me.”

Nearly four months later, Weir is happy she took that leap of faith. She laughs when it is suggested her timing wasn’t exactly impeccable.

Weir began her new job in early March just as the COVID-19 pandemic was becoming a serious issue in British Columbia. “My first week or so was normal and then it was all COVID,” Weir says.

Suddenly, her to-do list got a lot longer as she and her pro shop staff prepared for the new COVID-19 golf world. Rivershore opened for the season on March 5th and has remained open throughout the pandemic.
“We had to get the facility ready and make sure everyone was social-distancing and that we had plexiglass and barriers up and signage and all that kind of stuff.” she says. “And we had to ensure the staff was trained with how to deal with people and how to make sure not to be scared to remind people to please keep their distance.

“The snowbirds coming back was at first a little bit of a challenge, but the membership is good about policing each other. They made sure that if they know someone had just come back they did their 14 days (of self-quarantine). We had the same challenges as everybody. I felt like we rose to the challenge pretty well.”

Weir had never played Rivershore before getting the job and like many other British Columbia golfers has fallen in love with the course. “The course is awesome,” Weir says. “There is always kind of a new way to play a hole because I am playing with the women and the men out here and I am playing from multiple tee boxes.

"It is definitely a course where you cannot just bomb driver. You need to be strategic with your tee shot depending on where the pin is. There are not a lot of courses where you have to think your way around quite like this one.”

Rivershore figures to get a bump in tourist traffic once the provincial government starts encouraging British Columbians to travel the province this summer. But right now, Rivershore members -- many of them homeowners at the course -- account for about 80 per cent of the play.

"That is one thing I missed at Burnaby. You had your regulars, but it’s a ton of people you don’t know. I really enjoy building a relationship with members and having a rapport with them and helping them with what they need.”

The members are happy to have her. “She is a welcome addition and has brought a really positive influence to the whole front end of the operation there,” says Jack Croucher, a longtime Rivershore member and prominent B.C. Golf rules official. “We’re really happy to have her. She has lots of energy, is a good player and a good teacher. She has really brought some vitality to the course.”

Weir is proud that she has become yet another woman appointed to a head pro job in British Columbia and notes that Kamloops seems to be attracting them. “I definitely think about it,” she says.

“I think it’s pretty cool. We actually have three Kamloops courses with female head pros at them. Kathy Gook is at Bighorn and Shannon McGeady is head pro at Tobiano. So it is interesting there are three of us in Kamloops.”