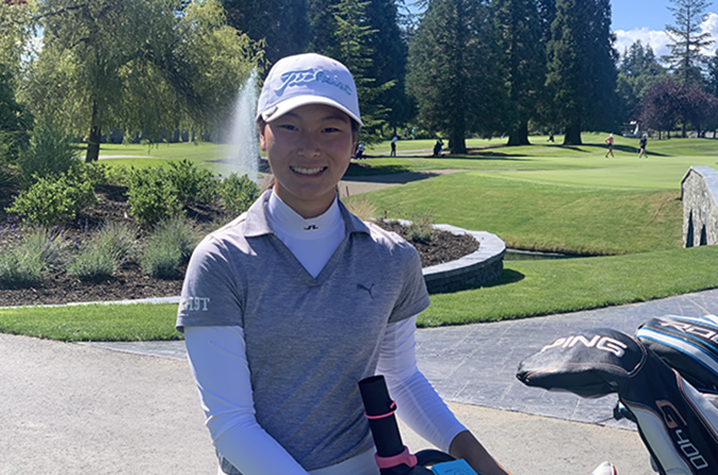 CAMPBELL RIVER -- Leah John shot an even-par 70 Tuesday, which seemed odd because at times it felt like she wasn’t making many pars in the first round of the B.C. Women’s Amateur Championship.

It turned out to be more like crazy good as it earned the 20-year-old Vancouver native a share of the lead with Surrey’s Bonnie Zhai.

“Today was definitely a funny day,” John said. “My scorecard is hideous, but I just kept bouncing back. It felt like I played golf today. I saw every corner of that golf course. I just made some really solid putts and shots when I needed to.”

Her round included five bogeys, three birdies and an eagle on the par 5 14th hole. John finished her round off with a kick-in birdie on the par 3 18th hole.

By contrast, Zhai’s round was more steady. She played the front nine in two-under par and struggled a bit coming home on the back nine at Campbell River. But a share of the lead at days’ end made for a nice birthday present for Zhai, who turned 15 on Tuesday. “I think the back nine is tougher,” Zhai said.

“I putted better than I normally do, which I am happy about. I was really steady on the front nine and started rushing a little on the back. I've been struggling the past couple of weeks because I haven’t been so straight off the tee. Normally I am. Today was a little better so my confidence is getting back to where I want it to be.”

Zhai and John have a one-shot lead on Lauren Kim, another 15-year-old from Surrey. Kim rolled in a 25-foot putt for birdie on the 18th hole to post her one-over 71. At the time, Kim said she thought the round would put her inside the top 20. It turned out much better than that as she is alone in third place.

The scores were not as low as many suspected they might be on Tuesday. Some players think Campbell River’s unique layout might have something to do with that. A typical par-70 layout usually has two par 5s, four pars 3s and 12 par 4s. Campbell River’s layout includes seven par 3s, five par 5s and just six par 4s.

“It feels different,” said Port Alberni’s Christina Proteau, who shot a six-over 76 and shares the Mid-Amateur lead for players 25 and over with Vancouver’s Nonie Marler. “You get through No. 13 and you are out of par 4s and you are in this par 3, par 5 mentality. You think of par 5s and par 3s and normally those are your scorable holes, but there are some very difficult par 3s and some very awkward par 5s. They are not really reachable.”

“The par 3s are longish, so it’s not like there are a couple of 120-yard par 3s that you can throw darts at,” added Marler. “You really have to be committed on your shots into them.”

John entered the tournament as one of the favourites and acknowledged feeling good about her game thanks to some strong play of late. She recently won the Marine Drive women’s club championship with a 36-hole score of eight-under par.

“I won by 11 shots,” John said. “That was the first time I have gone that low and just seeing it is possible added a lot of confidence. I know what I need to do. It is definitely the short game. You definitely putt for dough.”

Three championships are being contested over 54 holes this week -- the Women’s Amateur, the Mid-Amateur and the Senior Women’s. Surrey’s Diane McFarlane, who plays out of Ledgeview Golf Club in Abbotsford, posted a two-over 72 to grab the first-round lead in the Senior Women’s Championship.

McFarlane, a postal worker who was playing in the last group of the day, was more than a little surprised when she was told she had the lead. “Now I have to get some sleep and wake up and do it again,” McFarlane said with a laugh. “No pressure.”

McFarlane, who rolled in a long birdie putt on the 18th green to finish her round, has a one-shot lead over senior ‘rookie’ Shelly Stouffer of Nanoose Bay and Sandra Turbide of Maple Ridge. Stouffer, last year’s Mid-Amateur champion, is playing in her first senior event and did not get her round off to a good start with a double-bogey on the first hole.

“Rough start,” Stouffer said. “So that was fun. Then I bogeyed again. I knew it was going to be hard for me because like everyone else I really haven’t been playing any tournaments. I was quite happy with the back nine, I was one-under. I held it together and got some good up and downs. I left a lot of par 5 birdies out there. I missed some short putts.”