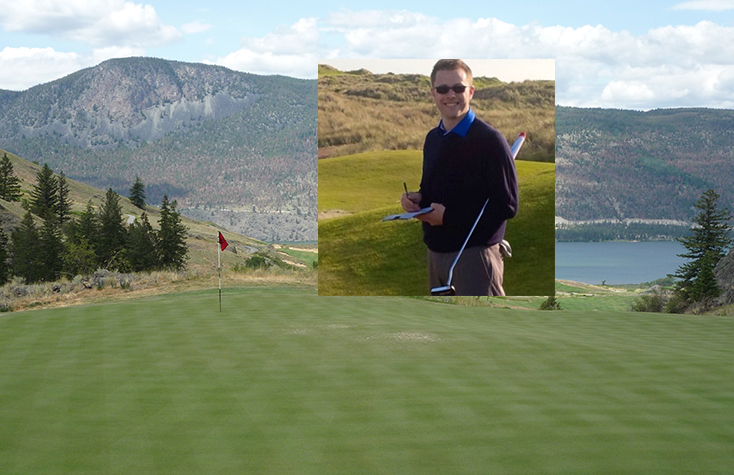 Mark Strong, the new general manager and head professional at Sagebrush Golf & Sporting Club, figures to be a popular guy this summer. He knows everyone is going to want to play Sagebrush when it reopens after being shut down since the end of the 2014 season.

And Strong, a former general manager at Richmond Country Club and longtime member of the PGA of BC, also knows he probably won’t be able to meet the demand from golfers wanting to tee it up on the scenic layout above Nicola Lake near Merritt that not long ago was rated as one of the 10 best courses in Canada.

Strong and new course owner Andrew Knott hope to have Sagebrush open by July 1, but Strong cautions that it will be a soft opening and play will be limited.

“We are going to pursue 40 to 50 rounds a day,” Strong says. “It will be in that neighborhood, especially given the amenities that we have right now. We want to make sure it succeeds at every step and we will not bite off more than we can chew right off the bat.

“It is not going to be invitation-only, but we will have only a certain number of tee times and what the corresponding (green fee) rate would be, I am not going to guess at that right now.”

Like so many others, Strong fell in love with Sagebrush the first time he had the chance to play it. “I played it very soon after it opened,” he says. “I think I only got up one other time with a bunch of other golf pros and we were coming back from the assistants championship in Jasper way back when. I just love how unique it is. It is kind of like links on a mountainside but it’s also got some very creative golf shots that you don’t see in a lot of other places.”

Strong says he hopes to recreate the original Sagebrush experience, which will include the popular Hideout and fly-fishing pond on the back nine. “We are not worried about packing in too may golfers because frankly the golf course is only designed to do so many rounds in a day or a year. So there is no point trying to pick a model that doesn’t fit with your restrictions of your infrastructure.”

Strong made a quick visit to Sagebrush a few days after he was officially appointed GM. He says course superintendent Neil Pilon, who was brought back last year by the new owner, is working hard with his crew to get the course in shape.

Strong says the bent-grass greens are in good shape and he is confident that Sagebrush’s fescue fairways will be in their traditional firm and fast condition when the course re-opens. When he got the job, Strong’s first phone call was to Richard Zokol, the Sagebrush founder and co-designer with Armen Suny and Rod Whitman.

“We had a great chat about the golf course and he has agreed to come out and and we are going to play golf and he is going to tell me what was on his mind on some of the holes, the shots he envisioned and all that sort of stuff.”

Strong obviously has lots of work to do between now and the course opening. One of three cottages on site is being renovated to use as a temporary clubhouse and there are scores of items on his to-do list. “Really, the priority will be developing our offering,” he says.

“What exactly are we going to do as far as packages. For me, one of the first layers is to get a good handle on the golf course itself. . .there is not much in place at all. It is kind of a start-from-scratch golf operation in terms of everything from our software to our offices and what is going to go in place in there. Neil has a better handle on the golf course, but other than that the biggest priority is just re-establishing the golf operation and reintroducing ourselves to the golfing public in the way that we want.”

WU WOWS ‘EM: Royal Colwood’s Anna Wu got some praise from three-time Masters champion Phil Mickelson while competing in the Drive, Chip and Putt finals at Augusta National. After the eight-year-old Wu drained her chip in the contest, Mickelson posted this comment on his Twitter account: “Watched Anna Wu hole a chip in the DCP contest. Look how her hands are way ahead which keeps the leading edge down. Brilliant!”

Wu went on to finish second in her seven- to nine-year-old age division.

SOLID STRETCH: Abbotsford’s Adam Hadwin tied for 23rd at the Valero Texas Open for his third straight finish inside the top 30 on the PGA TOUR. Hadwin closed with a two-under 70 to finish the event at four-under par, 14 shots behind winner Jordan Spieth. Hadwin, who earned $65,285, moved up five spots to 101st on the FedEx Cup points list.

Fellow Abbotsford native Nick Taylor tied for 59th at one-over par after closing with a 72. He fell three spots to 126th on the FedEx Cup list and made $16,940.

SVENSSON SHARP: Surrey’s Adam Svensson followed up his win on the Korn Ferry Tour with a tie for 13th place at the Emerald Coast Classic at Sandestin in Florida. Svensson’s 72-hole total of eight-under par was six shots behind winner Stephan Jaeger of Germany.

Svensson, who made $11,850, dropped one spot to 13th on the Korn Ferry points list. Vancouver’s Stuart Macdonald missed the cut by one shot. The Korn Ferry Tour resumes April 15-18 in Las Vegas for the MGM Resorts Championship at Paiute.

VENUE CHANGE: The Pacific Coast Amateur Championship, which had been scheduled to be played this summer at Royal Colwood in Victoria, has been moved to Chambers Bay south of Seattle due to uncertainty about the Canadian-U.S. border. Royal Colwood was also scheduled to play host to last year’s tournament, which was cancelled due to COVID-19. This year’s event goes July 20-23.

INTO THE POOL: Entries into the Vancouver Resource Society’s annual Masters pool are now available at vrsgolfpool.org. Money raised benefits the VRS, a non-profit organization that helps provide accessible housing for persons with disabilities, seniors and families. Entries are $25 each or five for $100. The winner earns $7,000 and the top 100 entries earn cash prizes.

CHIP SHOTS: John Randle, a longtime fixture on the Vancouver Island golf scene, is the new director of golf at Morningstar in Parksville. . .Westwood Plateau’s Country Club course in Coquitlam opens its season on Thursday (April 8th). . .Shuswap National in Salmon Arm and Chateau Whistler have been named as host sites for the regional finals of this year’s RBC PGA Scramble.