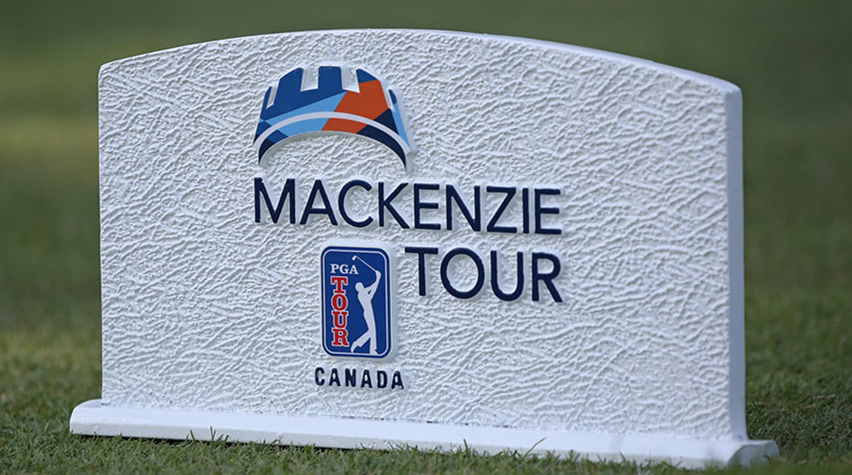 The Mackenzie Tour-PGA Tour Canada circuit has released an eight-event schedule for Canadian-based players that concludes with tournaments in Kelowna and Victoria in late September and early October.

The schedule touches both coasts as it includes two tournaments in Prince Edward Island in late August and early September.

The schedule begins July 29 - Aug. 1 with the Mackenzie Investments Open in Blainville, Que. It concludes Sept. 31 - Oct. 3 with the DCBank Open presented by Times-Colonist at Uplands Golf Club in Victoria.

The GolfBC Championship at Gallagher’s Canyon in Kelowna goes Sept. 23-26. The tour’s regular Vancouver-area event will not be played this year.

Of course, much has changed since then. After being forced to cancel its 2020 season due to the COVID 19 pandemic, the Mackenzie Tour faced major obstacles again this year due to the border closure and quarantine restrictions.

The PGA TOUR created the new Forme Tour, which will be played this summer in the United States for players who had exempt Mackenzie Tour status from 2019 and those who earned status through qualifying schools this spring. 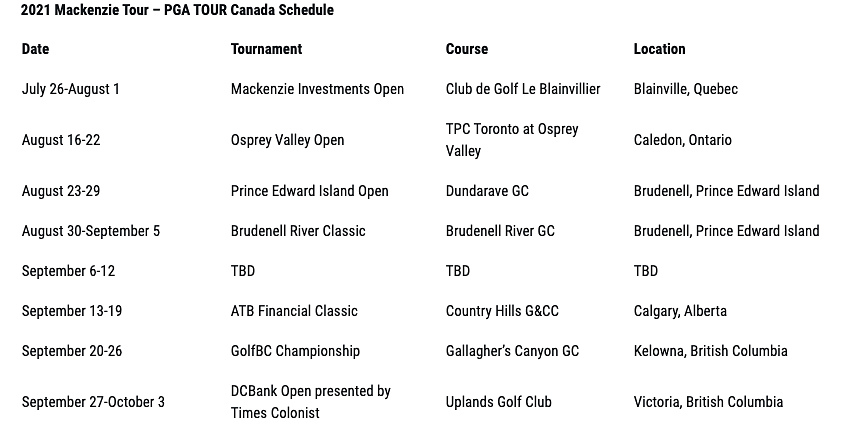 The Forme Tour will offer the traditional Korn Ferry Tour status to its top players this summer. This summer’s money-list winner on the Mackenzie Tour will earn exempt status on next year’s Mackenzie Tour, which is expected to return to normal in 2022.

Players finishing second through fifth will receive conditional status and guaranteed starts through the first reshuffle. Players sixth through 10th will each receive a sponsor’s exemption into one event in 2022.

“Being the final event, there should be a lot at stake at our tournament,” Dagg said. He also said with health restrictions expected to be eased by Sept. 1, the Victoria event should be able to be run as normal.

“We’ll be able to go back to the shotgun pro-am and have a VIP deck for our sponsors and go back to having our 250 volunteers,” Dagg said. “From the standpoint of running a golf tournament we couldn’t have asked for anything better.”

Dagg doesn’t think the tournament will be hurt by the fact that it will only be open to Canadian-based players this year. “I think we’ll probably draw more fans,” Dagg said. “When Tony Finau played here nobody knew who he was. Same thing when Steve Stricker played here. He was a 20-year-old kid. . .I put (Victoria resident) Jim Rutledge out there playing and I get 500 people.” 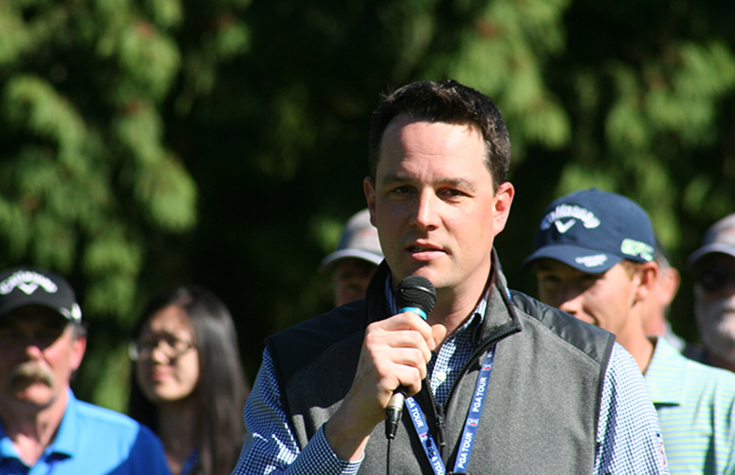 Mackenzie Tour executive director Scott Pritchard said the tour continues to work with provincial health authorities and noted that approvals to return to competition still need to happen across the country.

But Pritchard and tournament organizers remain encouraged that events will be able to be played based on the vaccine rollout.

After a two-week break following the first event, the remaining seven tournaments will be played in a seven-week stretch. “We believe there is good pacing to our schedule and the players will get in a lot of golf this summer in successive weeks,” Pritchard said in a news release.

“With the limited amount of competitive golf available over the last year, we know the players are anxious to get started and will embrace these events played at high-quality golf courses in the summer and into the fall.”

The tour is still looking for a home for one of its eight events. Its fifth tournament, scheduled for Sept. 9-12, is listed as TBD (to be determined).