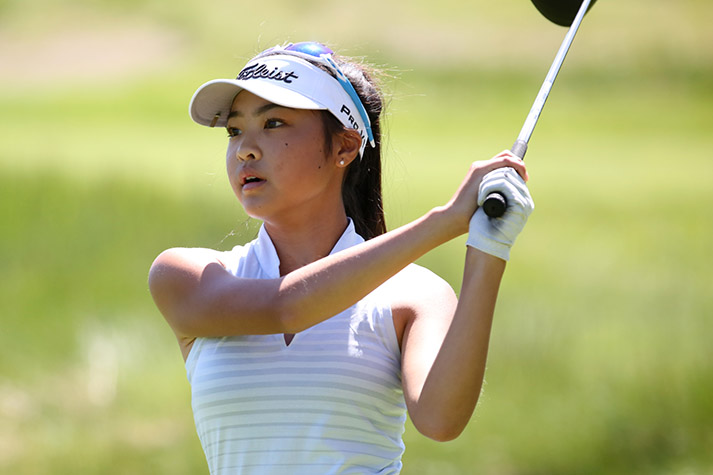 SUMMERLAND -- Jennifer Gu is a bit of a free spirit so when things got off to a shaky start in the second round of the B.C. Women’s Amateur Championship, she decided to try something a little different to snap out of it.  After a pair of sloppy bogeys to open her day, Gu planted herself down on the third tee block and . . . did some yoga.

“I did some Sun Salutations,” the 18-year-old West Vancouver native said with a smile after her round.

“It’s kind of like a circuit of stretches, but is very calming. . .I was doing anything to keep me calm. The heart was pulsating a little bit. Hey, it’s the B.C. Am, kind of a big deal out here.”

It seemed to work. Gu’s game was rock solid the rest of the way as she recovered to shoot a one-under 73 at Summerland Golf Club. She’s four-under at the halfway mark of the 72-hole championship and has a three-shot lead over Yeji Kwon of Port Coquitlam.

Gu was delighted with the way she dealt with that early adversity after the two early bogeys. In the past, she might have let that kind of start ruin her entire round. “I played very solid,” she said.

“I am very happy with it. It’s not as low as I wanted, but that is just how golf is. It’s hard to sleep on the lead. I have done it a couple of times and I haven’t played well the day after. So I stayed patient after those first two holes.

Gu, who just graduated from Rockridge Secondary in West Vancouver and is off to Kent State University in Ohio this fall to play collegiate golf, was named to Canada’s national junior team last fall. She calls her experience with the team invaluable, although she acknowledges that she has had some difficulty handling the pressure of playing for her country.

“I definitely struggled in the spring season because it is so much pressure,” she said. “You are playing for Canada. It is so much pressure. I played well in the U.S. because nobody knew me there. Then I come up to a tournament in B.C. or Canada and everyone is like, 'that girl needs to shoot a good number or else why is she on the team?' So I struggled with that aspect of it.

“The coaching has been so important for me and just being supported every week. It is easy to be supported when you post a good round and all your friends say, good round. . .but it’s those bad rounds where your coaches really support you and motivate you to play better next week.”

While Gu struggled out of the gate, the 15-year-old Kwon had a a dream start. She eagled the first hole and birdied the second. She just needed 32 strokes to complete her front nine. “I made a couple of mistakes on the back nine,” Kwon said.

One of those resulted in a lost ball on the par 5 13th hole, where she made a double-bogey. She ended up shooting a one-under 73. “My tee ball went into the trees and I couldn’t find it,” Kwon said. “But I was able to make a one-putt for my double.”

Kwon is trying to win her second provincial championship. Last summer, she won the Alberta Women’s Amateur. Last week, she tied for third at the Glencoe Invitational in Calgary. Leah John of Vancouver is alone in third place at even par after her second straight 74. Victoria Liu of Vancouver and Vanessa Zhang of Vancouver are tied for fourth at one-over.

The 47-woman field was cut to the top 24 and ties following Wednesday’s second round. The cut came at 12-over and 25 players survived to play the final two rounds.

CHIP SHOTS: A two-woman better-ball competition is also being contested this week. The team of Sydney Clement of Summerland and Akari Hayashi of Victoria lead at 13-under par. The teams of Tina Jiang of Richmond and Emma Sabbagh of Kelowna and Yeji Kwon of Port Coquitlam and Abby Chow of Coquitlam are four shots back in second place. . .The 36-hole Zone competition was won by the Zone 4 team of Leah John and Katherine Hao.