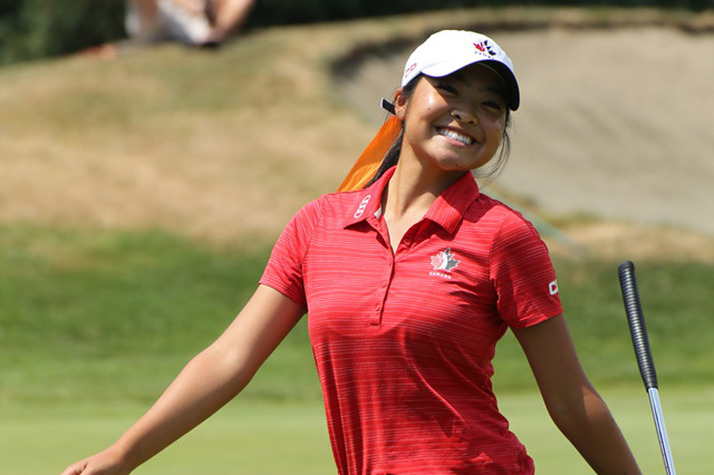 Jennifer Gu Has A Right To Smile Now That She Is The BC Junior Girls Champion - image credit Duncan O'Brien/fairwayvision.com

PARKSVILLE -- Jennifer Gu played 'catch me if you can' all week with the rest of the field at the B.C. Junior Girls Championship. It turns out no one could.

The 18-year-old from West Vancouver went wire-to-wire to win the championship at Morningstar Golf Club as she bounced back from a tough runner-up finish at the recent B.C. Women’s Amateur Championship in Summerland.

“I lost last week and I had a lot of people telling me to go win,” Gu said after her round. “So I am happy with myself, I am happy I met those expectations. The pressure was definitely good. I used it and played solid.”

Gu won by four shots. She fired a three-over 75 Friday to finish the 72-hole event at seven-over. It was not as easy as the score might suggest. Gu got off to a terrific start, opening her round with birdies on the first two holes to stretch her lead to four shots. She made routine pars the next six holes before she faced her first adversity.

Her drive on the par 5 ninth hole went left into a penalty area and she ended up making a double-bogey. Suddenly, her lead over Coquitlam’s June Hsiao was just a single shot. “It was a nice start to a good round,’ she said. “I wanted to post a lower number than I did today but I started well, I hung in there. It was looking dark in some moments, but I am happy with what I did this week.”

Gu is a member of Canada’s national junior team and plays out of Seymour Golf & Country Club in North Vancouver. She came to this tournament with that loss in Summerland still stinging. She led the Women’s Amateur through the first two rounds before finishing second to Vancouver’s Leah John. “I felt a lot of pressure,” she said. “It is my final year as a junior. I was expected to win by a lot of people, especially after the week I had last week.

“I think being on the national team you want to win at the provincial level. You want to prove it to yourself, you want to prove to the other competitors you deserve that spot. I took that pressure and I turned it into a positive this week. It doesn’t happen all the time, but I am happy with how it turned out. I am excited by my progress and my process was great this week.”

Gu took control of the tournament early on the back nine when the 14-year-old Hsiao stumbled. No one was able to put any pressure on her the rest of the way. Gu was lamenting a sloppy bogey she made on the par 4 18th hole. After striping a drive, she had only about 75 yards to the pin. “I had a really good wedge number in and I was like, 'oh my gosh this is birdie-zone, I am sticking it,'” Gu said with a laugh.

“I just caught it a bit high on the face and it just spun more than I wanted it to. It landed into the hill and it just didn’t work out for me. At that point I was just like, if you could just get the ball in the hole I will be happy. Just get the job done and I did. . .I went wire-to-wire which is not easy to do. I have not done that much. Sleeping on the lead is tough and I did it for three nights."

Richmond’s Tina Jiang finished second, thanks to the round of the week on Friday. Jiang closed with a women’s course record of three-under 69. It capped quite a comeback for Jiang, who started the tournament with a big number. “I didn’t have a good start to the tournament,” Jiang said. “I shot 83, so I think this is a pretty good comeback. My putting was really good today. I made some really nice putts.”

Coquitlam’s Martina Yu finished third at 12-over after carding a one-over 73 on Friday. Gu, Jiang and Yu were named to British Columbia’s team that would normally represent the province in team competitions at the Canadian Junior Girls Championship later this summer. However, inter-provincial team competitions will not be held this year.

CHIP SHOTS: A 72-hole better-ball competition was also held this week. The team of Martina Yu of Coquitlam and Luna Lu of Burnaby won with a score of 16-under par. The team of Jennifer Gu of West Vancouver and Katherine Hao of Burnaby were second at 14-under par....Retired sports broadcaster Bernie Pascal, who lives near Morningstar, emceed the trophy presentation ceremony. . .Next year’s B.C. Junior Boys & Girls Championships will be played at Nk’Mip Canyon Desert Golf Course in Oliver. . .Gu is off to Kent State University in Ohio later this month to play collegiate golf.