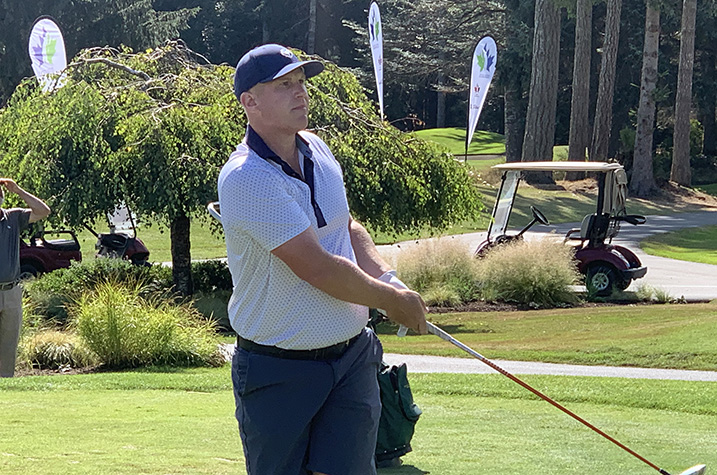 Patrick Weeks Managed To Hang Onto His Lead Going Into The Final Round At The B.C. Amateur - Image Credit Brad Ziemer/BC Golf

“Well, I have closed over a thousand real estate deals and I have only closed a couple of tournaments,” the 42-year-old Vancouver realtor said after Thursday’s third round.

“So it’s going to be a lot harder than what I do every day for a living. But also more fun.”

Weeks didn’t have his best stuff Thursday at Storey Creek Golf Club, but managed to close his round with a birdie and shoot a three-over 75. That left him at eight-under par for the tournament and three shots clear of the field heading into Friday’s final round of the 119th playing of the championship.

“All things considered I was really happy with the way I played today,” said Weeks, who plays out of Shaughnessy Golf & Country Club. “I didn’t have my A or my B game and the putter was definitely paying attention to my nerves today. I battled through that.”

Weeks credits his wife Jenny for much of his success this week. “Jenny and I are having a great time together,” he said. “It is really nice to have her on the bag. She keeps me fed and hydrated.” She has also been sharing more than the occasional kiss with her husband.

They had a deal heading into the tournament. Every birdie Weeks makes, he gets a kiss from Jenny. He made 15 of them in the first two rounds, but only two on Thursday. “That was my idea,’ Weeks said. Jenny quickly added with a laugh: “My idea was $1,000 for every bogey he made.” 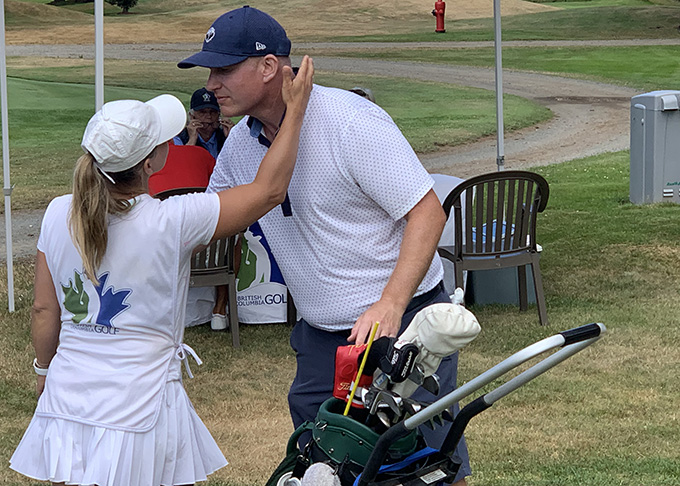 B.C. Amateur Leader Patrick Weeks Continued His Tradition Of Getting A Kiss From Wife & Caddy After Making Birdies

Weeks knows he will be battling some nerves during the final round. He hopes to draw upon some past experiences, including a close call in the 2014 B.C. Mid-Amateur Championship. “I’d be lying if I said I won’t be nervous. I have never been in this position before. I lost in a playoff at the B.C. Mid-Am at Big Sky a few years ago to Craig Doell. I am going to draw from that experience.”

The 18-year-old Knight is trying to ride the momentum and confidence he gained earlier this month when he won the B.C. Junior Boys Championship at Morningstar. “My ball-striking was really good that week and I am trying to make sure I make the same swings here,” said Knight.

He had a low round going Thursday. Knight was five-under through 11 holes but stumbled slightly down the stretch to shoot a two-under 70. He had seven birdies in his round. “I wanted to make more birdies, but my putting dropped off a little bit,” he said.

Bellrose plays out of Storey Creek and had the low round of the day, a five-under 67. Robertson shot a three-under 69 to move into contention. “My putting was way better today,” said Robertson, a former tour pro who regained his amateur status about three years ago. “I know I can break par out here. I feel like my swing is really in a good place. I am hitting it exactly where I am aimed. It’s a good feeling.”

Click HERE for complete scoring and final round pairings.

CHIP SHOTS: Robertson and fellow Courtenay resident Matt Hamilton lead a two-man better-ball competition that is also being contested this week. They sit at 24-under par through three rounds. That is three shots better than the team of Weeks and Cory Hilditch of Osoyoos. . .The final group tees off at 10 a.m. Friday.