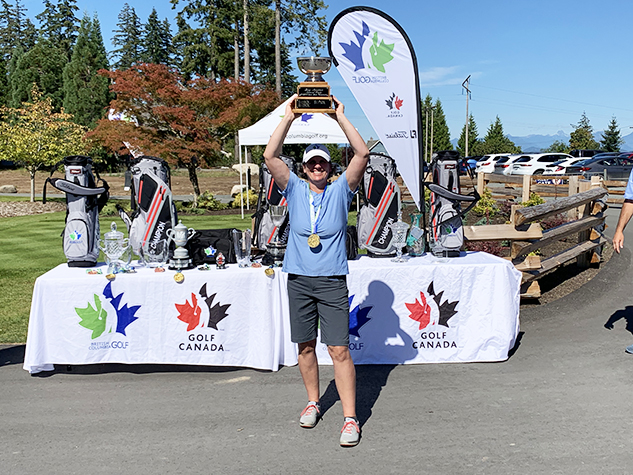 Shelly Stouffer, Shown Her With The Trophy Last Year At Campbell River, Won Her 2nd Straight BC Senior Women's Championship This Year At Revelstoke Golf Club

Shelly Stouffer’s second straight B.C. Senior Women’s Championship title didn’t come quite as easy as the first one. Nothing was easy about Friday’s final round for Stouffer, who saw an eight-shot lead evaporate before she rallied to win in dramatic style at Revelstoke Golf Club.

After surrendering the lead late in the round, Stouffer birdied the final two holes to force a playoff and then added another one on the first extra hole to beat six-time champion Jackie Little.

When it was all over an emotionally drained Stouffer could only laugh. “It was a bit of a struggle out there, I am not going to lie,” said Stouffer, who won last year’s championship in Campbell River by 12 shots in her senior debut.

She appeared to be destined for another lopsided win heading into the final round at Revelstoke. But disaster struck on the first hole and the 51-year-old Nanoose Bay resident struggled with her swing much of the day.

“I make a double on the first hole and I’m like, there goes two shots,” Stouffer said. “Jackie was playing well making birdies and I’m making bogeys. At the turn I am one up and I’m like, I am okay, I can do this. I was trying to talk myself into it.”

Stouffer lost her lead with a bogey on the 14th hole and walked to the 15th tee trailing Little by one. Little still had that one-shot cushion when they headed to the short par 3 17th. Both players had good looks at birdie. Little missed her attempt while Stouffer rolled in a three-footer for a birdie that tied things.

Stouffer and Little both birdied the par 5 18th to send it to a playoff. “We went to No. 1 for the playoff and I had made that double there this morning,” Stouffer said. “I went first and bombed a drive and ended up knocking in a 25-footer for birdie. So I finished with three straight birdies, which was good.

“I finally got it together. I was breathing, I was trying to work out my swing. I wasn’t hitting it very well and I was too fast. I tried to slow myself down. I was just happy to finish the way I did, for sure.”

Stouffer will dwell on those three birdies, rather than the 84 she shot in the final round. She and Little both finished at 10-over for the tournament on a Revelstoke course that played tough. It was set up as a par 75. “The first two days were quite windy and the course was playing quite long,” Stouffer said. “They had a lot of 370-yard par 4s and it’s lush with lots of trees on the front. There’s lots of spots to get into trouble.

“The first two days I played solid and only made a couple  of stupid mistakes. Today I just got tight. It’s hard to keep a lead when someone is playing well and you are playing bad. I was happy that I got it together and finished strong.”

Little closed with a one-over 76 and won her second B.C. Super-Senior Championship for players 60 and older. The 63-year-old B.C. Golf Hall of Fame member now lives in the tiny Kootenay community of Procter and plays out of Balfour Golf Club. “It was quite the day,” Little said. “I have been struggling with my game, so it was good to hit it better finally.”

Little acknowledged she was a little surprised she was able to catch Stouffer. “I just thought I’d give it my best shot,” she said. “Sometimes the largest lead is not always easy because you go into protect-it mode. I just tried to play as well as I could and just see where things went. Did I expect to be in a playoff? I would have to say no.”

Sandra Turbide of Maple Ridge finished third at 13-over after closing with a four-over 79. Alison Murdoch of Victoria and Tricia Rachfall of Port Moody were another 10 shots back and tied for fourth.

Stouffer said she plans to play in the Canadian Senior Women’s Championship, which goes Aug. 31-Sept. 2 in Bromont, Que. Stouffer, Little and Turbide were named to the B.C. team that would normally represent the province at nationals, but inter-provincial team competitions are not being held this year.

CHIP SHOTS: The team of Arlene Johnston of Surrey and Marlene Proc of North Vancouver won the net better-ball competition with a score of 17-under par. . .The senior women’s competition also included a net Stableford component. Little and June Zhang of Coquitlam tied for top spot in the A flight with 101 points.  Barb Vincent of Williams Lake took the B flight with 107 points, while Corinne O’Handley won the C flight with 106 points.