Victoria’s Craig Doell Comes From Behind To Win His Third B.C. Mid-Amateur Championship 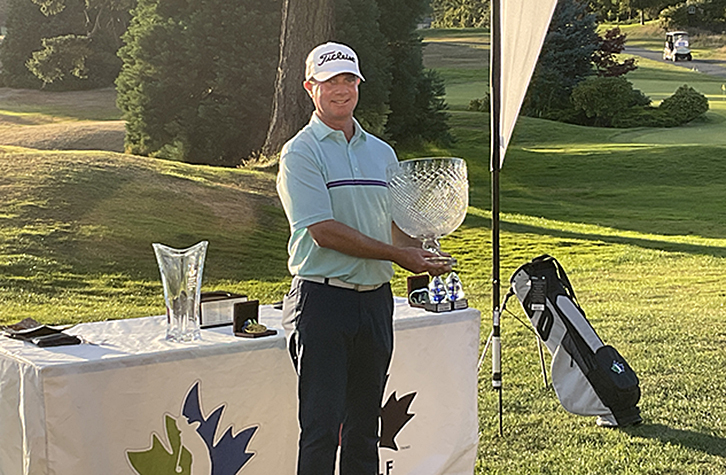 Craig Doell knew he would have to play a solid round and also get some help from the guy he was chasing on the final day of the B.C. Men’s Mid-Amateur Championship at Victoria’s Gorge Vale Golf Club.

He got both and completed his B.C. Mid-Am hat trick with his third victory in the competition for players aged 25 and older. The 49-year-old Doell played near flawless golf in Thursday’s final round.

He made just one bogey in his two-under round of 70 and it came on the 18th hole when he already had the tournament won. He beat Courtenay’s John Robertson, who had led through the first two rounds, by three shots.

Doell had started the final round five shots back in third place. “I just went out, just did my own thing and wasn’t sure what John was going to do,” Doell said. “Obviously he came back and it made it close coming down the stretch. I played consistently and didn’t make many mistakes so it was good.”

Doell is a longtime member at Victoria Golf Club, but knows Gorge Vale well. That familiarity helped, especially on Gorge Vale’s challenging greens. “I usually play a few rounds every year here and I used to be a junior member here for a few years when I was younger,” he said. “I actually feel Gorge Vale’s greens now are faster than Victoria’s, but I was just at the U.S. Amateur at Oakmont and they were even faster there. They were stimping at 14 or 15.”

Doell’s previous Mid-Amateur wins came in 2014 at Big Sky in Pemberton and in 2017 at Kokanee Springs in Crawford Bay. “It’s nice to get the hat trick,” he said. “I think I just stayed really patient and just played very consistently. I didn’t make any mistakes and I certainly putted solid the whole round.”

Doell has been one of British Columbia’s top amateur golfers over the past two decades or so. He acknowledged that as he gets a bit older, the wins are that much sweeter. “Obviously, it feels great,” said Doell, who works as an investment adviser. “I don’t think my expectations are as high as they once were. I am just kind of coming out and doing my thing and not really worrying about what the results are. If it adds up good at the end, that’s great.”

Doell finished the 54-hole event at three-under par. Robertson, a 50-year-old former pro who was reinstated as an amateur about three years ago, struggled to a final-round 78 and finished second at even-par. Robertson birdied his first hole, but not much went right after that. “I knew that he couldn’t beat me if I just played, but I was just leaking shots here and there,” Robertson said.

Saare Adams of Victoria, Alex Cartwright of Victoria and Ryan Lloyd of Langley tied for third at three-over par. Doell and Robertson also finished 1-2 in the Mid-Master competition for players aged 40 and older.

CHIP SHOTS: A two-person better-ball competition was also held at Gorge Vale. The Courtenay team of Robertson and Ed Bellrose won by two shots with a three-round total of 18-under par. The team of Dan Swanson of Abbotsford and Lloyd were one shot back. . .Swanson, the defending Mid-Am champion, tied for sixth at four-over par after closing with a three-under 69.