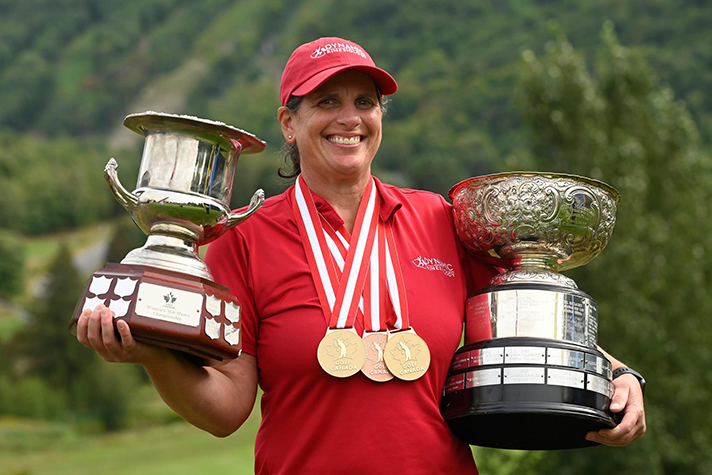 As you can probably imagine, there is no quick way to get from Nanoose Bay to Point Clear, Ala., the site of this week’s U.S. Senior Women’s Amateur Championship.

Shelly Stouffer was scheduled to leave on a 6 a.m. flight Tuesday from Comox to Calgary, where she’ll connect to Atlanta. From there she’ll fly to Pensacola, Fla., where she is supposed to catch a shuttle for a one-hour ride to her hotel near the golf course.

Stouffer’s win at last week’s Canadian Senior Women’s Championship in Bromont, Que., earned her a spot in the U.S. Senior Women’s Amateur. “I didn’t realize the tournament was this week, so I was like holy crap,” Stouffer says with a laugh. “But I’ve got my negative COVID test and I am ready to go . This whole experience has been a whirlwind.”

It would have been easier to stay in Quebec and fly to Alabama from there, but she left her passport at home and wanted to see her two sons. So she returned home for a quick visit.

Stouffer hopes to get in two practice rounds Wednesday and Thursday in Alabama before play begins Friday. Sixty-four players will advance to match play after 36 holes of stroke play.

Stouffer’s Canadian Seniors win also earned her an exemption into the 2022 U.S. Senior Women’s Open next summer at NCR Country Club in Kettering, Ohio. “I am feeling good about my game,” says Stouffer, who won the B.C. Senior Women’s Championship earlier this summer at Revelstoke Golf Club. “I played Fairwinds from the blue tees on Sunday and shot even-par. I am hitting the ball really well.”

CLOSE, BUT NO CARD: It was a breakthrough season for Stuart Macdonald, even though it didn’t end with the PGA TOUR promotion the Vancouver native had hoped for. Macdonald’s bid for a PGA TOUR card came up just short at the Korn Ferry Tour Championship in Newburgh, Ind. He started his final round with a birdie and finished it with two more, but could only manage to shoot an even-par 72 and finished tied for 52nd at two-under par.

Macdonald dropped three spots to finish 33rd in the race for the 25 additional PGA TOUR cards that were handed out following the three-event Korn Ferry Tour Finals. That was disappointing, but 2021 still had so many positives for Macdonald. He took his game to a new level and had a stretch during the late spring and early summer when he had four top-10s in a five-tournament stretch. He’ll be back on the Korn Ferry Tour next year full of confidence, hoping to take another run at the PGA TOUR.

BACK ON TRACK: After struggling on the Forme Tour, where he failed to make a cut in four starts, Duncan’s Callum Davison has found his game on the Mackenzie Tour. Davison won the Brudenell River Classic, the second of two events in Prince Edward Island, and now sits fourth on the Mackenzie Tour’s points list. He finished the event at 15-under par, one shot better than Canadian national amateur team member Noah Steele of Kingston, Ont. A week earlier, Davison tied for 14th at the Prince Edward Island Open.

The win didn’t come easy for the cross-handed Davison as the final round was played in heavy rain. After (No. 12) I was just trying to make contact,” said Davison, who bogeyed two of his last three holes. “I was just trying to make contact. If you miss it, at least miss it in the right areas so you can at least try to make a par. By the time we got to 17, it was not very really playable. . .I would have picked up my ball if I was playing for fun.” After his win, Davison hopped into his family’s motor home for the long drive to Saskatchewan, where the Mackenzie Tour this week plays the Elk Ridge Open in Lake Waskesiu.

MARINE MEMORIES: This past weekend’s Solheim Cup featured two American players who made big impressions at the 2018 Canadian Women’s Amateur Championship played at Vancouver’s Marine Drive Golf Club. Jennifer Kupcho finished sixth at Marine Drive after opening the tournament with a course record seven-under 64 that included a 29 on the back nine. Yealimi Noh was even better as the then 17-year-old won the event with a 72-hole score of 11-under par.

SEASON-BEST: Langley’s James Allenby and Richmond’s Chris Crisologo both had their best finishes of the season at the Forme Tour’s Rolling Green Championship in Springfield, Pa. Allenby completed the event tied for 12th at six-under par, nine shots behind winner Andrew Yun of Tacoma, Wash. Crisologo tied for 17th at five-under par, while Comox native Riley Wheeldon tied for 45th at one-over par.

The Forme Tour had to find a new venue for its season-ending Tour Championship this week. It was originally scheduled for The Ridge at Back Brook in New Jersey, which was left unplayable after being hit by the torrential rain that hammered the area last week. The Tour Championship will now be held at Huntsville Golf Club outside Wilkes-Barre, Pa. Allenby, currently 37th, is the top British Columbian on the Forme Tour points list.