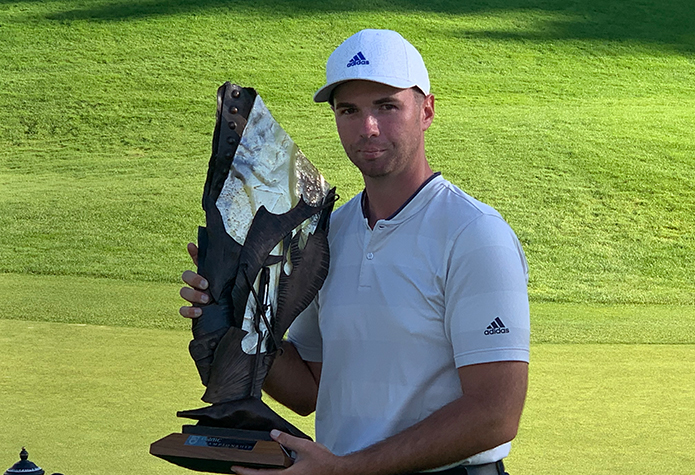 His golf game has taken Callum Davison on one long emotional roller-coaster the past three months. Suddenly, that ride is fun again.

The 21-year-old from Duncan became the first multiple-winner on the Mackenzie Tour this season when he captured the GolfBC Championship this past weekend at Gallagher’s Canyon Golf Club in Kelowna.

The win was worth $18,000 to Davison, a former B.C. Bantam Boys champion who now leads the Mackenzie Tour points list heading into the season-ending tournament in Victoria this week.

Davison’s fine play the past month has come after he struggled mightily with his driver on the Forme Tour in the U.S. “I missed a lot of cuts in a row,” Davison said of his time on the Forme Tour this summer. “That is never good for the head.”

Davison and his parents, who spent the past three months criss-crossing the United States and Canada in the family motor home, made the decision to leave the Forme Tour and join the Mackenzie Tour in Prince Edward Island.

Davison abandoned the longer driver he was experimenting with in an effort to find more distance off the tee and won the second of two events in PEI. He has been playing well since then and now is in a position to lock up exempt status on next year’s Mackenzie Tour if he can hang on to that points lead.

No matter what happens in Victoria, he will finish high enough to have at least guaranteed status for the first few events next year. “That’s big,” Davison said. “I don’t have to go to Q-School which is nice. Obviously, the win in PEI kind of kick-started things. My game was there, off the tee was terrible, but it got better every week after I switched drivers and my game felt good going into this week.”

Davison, who gets considerable attention as a result of the cross-handed grip he uses to swing his clubs, won at Gallagher’s with a total of 14-under par. That was two shots better than Delta resident Yi Cao. “I have worked so hard,” Davison said.

“I worked harder than ever during the off-season and felt like I wasn’t getting anything out of it. My Dad and Mom have been with me the whole time and I can’t say enough about them. They kind of boosted me up.”

DAZZLING DEBUT: Former B.C. Junior Boys champion Ilirian Zalli of Vancouver made quite the impression in his Mackenzie Tour debut. The 19-year-old, who just turned pro earlier this year, shot four straight rounds in the 60s at Gallagher’s Canyon and tied for fourth place at 10-under par. “It was my debut week and I haven’t played in any of these (Mackenzie Tour events) before, so I am pretty happy with how it went,” said Zalli, who won the 2018 B.C. Junior Boys title at Kamloops Golf & Country Club.

“I shot every round in the 60s and that is always a good takeaway even if it doesn’t end up in a win.” Other British Columbia residents who cracked the top 10 at the GolfBC Championship included transplanted Australian Will Barnett of Coquitlam, who was sixth at eight-under, and Abbotsford’s Zach Olson and Jordan Relling of Kamloops, who tied for seventh at seven-under. The Mackenzie Tour’s final event, the Reliance Properties DC Bank Open presented by Times Colonist, goes Thursday through Sunday at Uplands Golf Club in Victoria.

MISSISSIPPI CALLING: After a one-week break for the Ryder Cup, the second event of the 2021-22 PGA TOUR season will be played this week at the Sanderson Farms Championship in Jackson, Miss. All four B.C. regulars -- Adam Hadwin and Nick Taylor of Abbotsford, Merritt’s Roger Sloan and Adam Svensson of Surrey -- are in the field. Taylor got his first win at this tournament back in 2014.
Other Canadians in the field include Michael Gligic, Taylor Pendrith and Mackenzie Hughes.

SCHOOL’S IN SESSION: The first stage of the Korn Ferry Tour qualifying school is underway and Kimberley’s Jared du Toit and Kaleb Gorbahn of Smithers are in the field this week at a site in Dayton, Nev. Last week, Richmond’s Chris Crisologo shot 12-under but missed by three shots at a site in Bermuda Dunes, Calif. Vancouver resident Evan Holmes, Lawren Rowe of Squamish and Stephen Thomas of Vancouver all failed to advance at a site in St. George, Utah.

COLLEGE COMMITMENT: Cooper Humphreys of Kelowna, who won the Canadian Juvenile Boys Championship this summer, has committed to Oregon State University. The 16-year-old Humphreys, who tied for 37th at last week’s GolfBC Championship at Gallagher’s Canyon Golf Club in Kelowna, will begin his collegiate career in the fall of 2023. Humphreys said he was highly impressed with head coach Jon Reehoorn and associate head coach Noah Goldman during a recent visit to Oregon State.

“The coaches are awesome,” Humphreys said. “Jon is a really smart guy and Noah is just a great guy to talk to. The facilities are awesome. They have the best short-game facility I have ever seen. The campus was awesome and the town of Corvallis seemed really cool. “I had other schools I was talking to, but Oregon State was the first one I visited and the only one I visited, so I liked it so much I wanted to commit then and there.”

EWART EXCELLENT: Coquitlam’s A.J. Ewart continues to make a big impression at Barry University in south Florida. Ewart began his junior season last week with a second-place finish at the Jay Jennison Cup in St. Augustine, Fla. Ewart tied a school record with a 54-hole score of 14-under and led Barry to a win in the team competition. “It was a good week for me,” Ewart said. “I was able to stick to my game plan really well and stayed extremely patient. I was able to eliminate a lot of mistakes which allowed me to make zero bogeys in my last two rounds.” Ewart shot rounds of 72, 63 and 67.

CAMPUS CORNER: The UBC men’s and women’s squads swept the team and individual titles at the University of the Fraser Valley’s Cascades Invitational at Chilliwack Golf Club. Russell Howlett and Una Chou, both freshmen, claimed the individual titles. The Simon Fraser University men’s team finished second at the Saint Martin’s Invitational at The Home Course in Dupont, Wash. SFU finished 12 shots behind the winning team from Western Washington University. Bailey Bjornsson led the way for SFU, tying for sixth place.

CHIP SHOTS: Vancouver’s Craig Dowling finished second at the inaugural All Abilities Championship at Humber Valley Golf Course in Toronto. . .Vancouver’s Nonie Marler has advanced to the Round of 64 at the U.S. Women’s Mid-Amateur in Blufton, S.C. . .Mike Mannion of Gibsons tied for 11th at the Canadian Senior Men’s Championship in La Malbaie, Que. Mannion finished the event at 14-over par, 12 shots behind winner Darren Ritchie of St. John, N.B. Kelowna’s Norm Bradley tied for 15th.