Henry Lee will always remember that his pro golf journey started a long way from his Coquitlam home. About 11,000 kilometres to be exact. He’ll also recall that he cashed a cheque in that first event.

Not a big one, mind you, but he got paid nonetheless. Lee tied for 43rd at the Argentine Open in Buenos Aires, the season-opening event of the 2022 PGA Tour Latino-America circuit.

Lee finished the event at Nordela Golf Club at one-over par. That was 12 shots behind winner Jorge Fernandez-Valdes of Argentina, who beat the field by three shots and earned a spot in next summer’s Open Championship at St. Andrews.

Lee spent much of his Friday not knowing if he’d be earning any cheque at all. He finished his second round early in the day at one-over and the cut at one point moved to even-par. But it fell back to one-over late in the day and Lee qualified for the weekend.

Lee, who graduated from the University of Washington this past spring, had been a member of Golf Canada’s national amateur team. He’ll now receive some assistance via their young pro program.

National team coach Derek Ingram thinks Lee is ready for the rigors of the pro game. “Henry has great habits and works extremely hard,” Ingram said. “He is a fantastic iron player, I would say he is a world-class iron player already. And if he continues to drive the ball well and improve that and his putting he has a very good chance of being a very successful pro.”

Lee earned status on the PGA Tour LA circuit at a qualifying school last month in Mazatlan. He is exempt through the first four events, meaning he has a spot in this week’s Scotia Wealth Management Chile Open in Santiago. Richmond’s Ziggy Nathu, who missed the cut in Argentina, is also in the Chile event.

VANCOUVER CONNECTION: Collin Morikawa had a tough final round at the Hero World Challenge, but his week in the Bahamas had one big positive. The five-time PGA TOUR winner announced his engagement to longtime girlfriend Katherine Zhu, who was born in Vancouver. 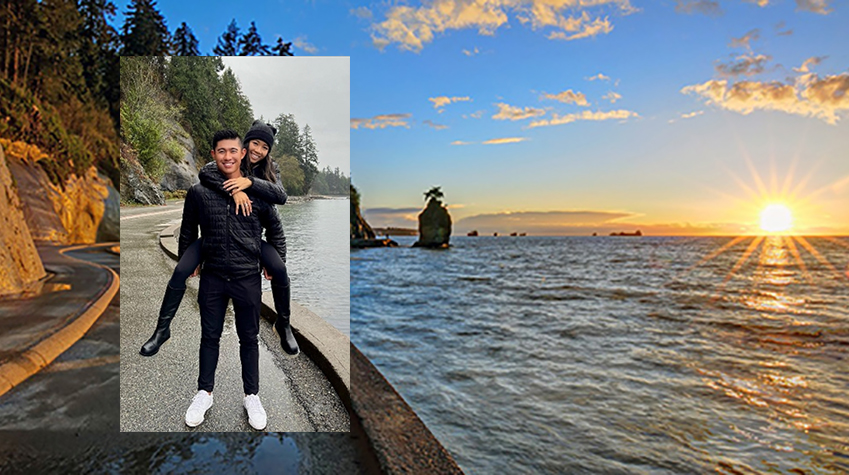 Collin Morikawa And His Fiance, Katherine Zhu Of Vancouver On The Stanley Park Seawall

In fact, Morikawa and Zhu spent some time in Vancouver last month, when they posted a photo to Instagram of them on the Stanley Park seawall. The two met while playing collegiate golf in California. Zhu played at Pepperdine University in Malibu, Calif., while Morikawa attended the University of California, Berkeley.

RESERVATIONS OPEN: Sagebrush Golf Club near Merritt is now taking reservations for its 2022 season, which will begin on April 30. Day Adventures at Sagebrush, which include unlimited golf, a barbecue lunch and complimentary on-course refreshments (non-alcoholic), will go for $245 (plus taxes) April 30-May 31, $285 June 1-Sept. 5 and $225 from Sept. 6-Oct. 16.

Sagebrush plans to limit play to a maximum of 48 golfers per day. Sunset golf-only experiences will be available on some days after 2 p.m. for $175. The course, which reopened last summer under new ownership after a seven-year hiatus, will operate Wednesdays through Sundays with limited operations on Mondays. Sagebrush will be closed on Tuesdays.

Sagebrush has eight suites available on site. The suites, with two king beds or four twins, go for $400 per night based on double occupancy and include breakfast. Additional guests are $50 per person with a maximum of four per suite. Sagebrush plans a number of new initiatives in 2022, including the opening of its Tavern restaurant, the re-launch of The Hideout -- its lunch and fishing escape at the back of the property -- and a new 16-hole chipping course.

Sagebrush staff undoubtedly have their fingers crossed that repairs to the Coquihalla Highway will be completed before the course begins its new season. For more information visit www.sagebrushgolfclub.com.

ROLE MODELS: Ewart is back on Golf Canada’s new national amateur team which was announced last month. The team recently held a training camp in Arizona, where Abbotsford’s Adam Hadwin dropped by to spend some time with the team. “The guys really had a blast with Adam and appreciate his insights and just how he does things,” said national team head coach Derek Ingram. “The best thing Adam said was that everybody does it differently, just find what works for you. The guys loved that.”

Ingram said having so many Canadians on the PGA TOUR who are willing to serve as role models is a huge boost to the national program. “It means a ton,” Ingram said. “It’s so important for a young player to have a role model and have a role model talk to them and share how they did it and share some of their experiences. Nick (Taylor) has done it in the past a bunch of times and Adam has been fantastic and Corey (Conners) and Mac (Hughes) and Taylor (Pendrith) have all given back. “It has been particularly great with Nick and Adam because they live in Arizona and they have been great with their time. They are unreal role models and, as you know, great people.”

BRIGHT FUTURE: Duncan’s Tristan Mandur is the other British Columbian on the new national team. Mandur, the 2020 B.C. Amateur champion, is now in his senior year at the University of Utah.
“Tristan has been on our radar quietly for several years,” Ingram said. “I told him that a couple of years ago when I watched him play the Pacific Coast Am. I really like him as a person. He’s smart, he’s extremely hard-working and he’s long. He’s got great competitive instincts and loves the game. It’s an advantage to hit the ball far and he has some of that. He has worked hard and I think he is going to make a great pro.”

TEE IN THE NEW YEAR: Golden Eagle Golf Club is looking for players to help them ring in the new year. The Pitt Meadows facility has a 10:30 a.m. shotgun tourney scheduled for Jan. 1 on its North Course. Entry is $99 for non-members ($65 for members) and includes a breakfast sandwich & a ‘Hair of the Dog’ beverage, lunch and a prize table worth $5,500. Members can sign up beginning Dec. 18, while non-members can book their spots starting on Dec. 20. Call 604-460-1111 for more details.