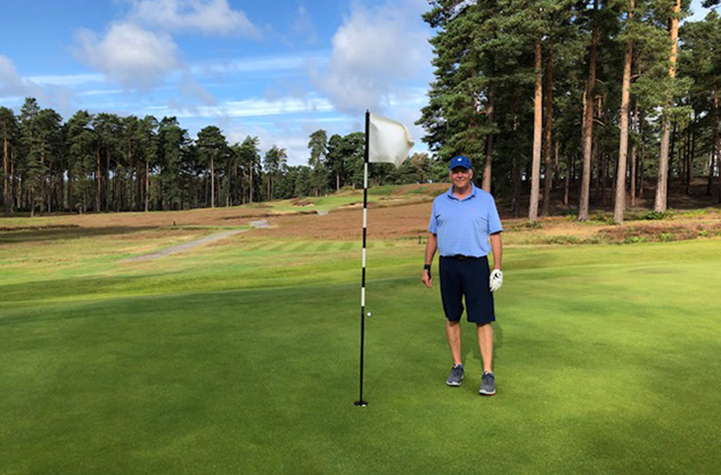 All that stood in the way of Brian Knoetze completing his goal of playing the top 100 courses in the United States was one of the toughest tee times in golf.

In a journey that began eight years ago, the longtime Marine Drive Golf Club member had crossed 99 courses off Golf Digest’s top 100 list. All that remained was Augusta National.

Knoetze had spent a lot of time wondering whether he was ever going to make that trip down Magnolia Lane. It’s not like you can just call the club and ask for a tee time. If you’re a mere mortal, you need an invitation from an Augusta National member to play the course. “It’s just about the hardest place in the world to get on to,” Knoetze says.

But Knoetze persevered and with the help of a friend of a friend, he finally got his invitation and played Augusta National in early December to complete his goal. “I think I am the first person not living in the U.S. to have done the U.S. top 100,” said Knoetze, a 63-year-old who plays to a six handicap. “I know of someone who was close but he got stuck because of COVID.”

Knoetze’s Augusta tee time came the same way many of his invitations did to other ultra-private clubs on the list. Some time ago, Knoetze connected with a golf historian on Twitter and the two became friends. “Interestingly the (Augusta) member also made contact with him through the golf history stuff that he does. They struck up a friendship. They had a friendly game and he got the invitation and they became bigger and bigger friends. And that is where my invitation came from. It’s just a connecting of all sorts of crazy dots that you would never think of.”

Knoetze jokes that he was a nervous wreck in the days preceding his round at Augusta National. He kept worrying about all the things that could go wrong. The day ended up being perfect. He didn’t even lose a ball in Rae’s Creek. “I am happy to say I shot 79 and I had not played in about six weeks because of being injured,” he says. “I was ecstatic to sneak it into 70s around there.”

He was also ecstatic and a little relieved to have completed the top 100. Knoetze has actually completed four Golf Digest lists. He started with the 2013 list, but the lists change a little every two years with a handful of courses being dropped and added. He has knocked off the 2013, 2015, 2017 and 2019 Golf Digest lists. His favourite courses are not a big surprise. 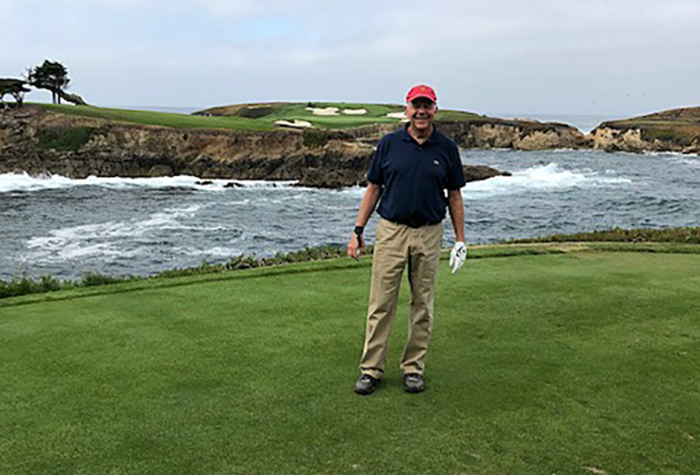 “I think the favourites largely end up being the top end of those lists,” he says. “Cypress Point would be a favourite for sure. And it’s hard to go to a place like Augusta and not say that’s a pretty special place.”
Knoetze, who is also a member of Royal Dornach in Scotland, is now chasing a different list. He’s trying to knock off Golf magazine’s top 100 courses in the world. And he’s well on his way.

“I am at 87 on that one at the moment,” he says. “In maybe two more years I can get to 100. Of course with COVID there are obstacles like nothing else these days with how do you get into places. And if you do get somewhere, what happens if you get COVID? I had a Dominican course I wanted to do, but do I really want to go to the Dominican Republic and get stuck there at the moment. Japan won’t even let me in. I have done all the UK ones that are on the list and I have a little bit in Europe. I’m embarrassed to say I haven’t done the Canadian ones, the two Cabot courses in Nova Scotia.”

He plans to play those ones this spring or summer.

CAREER BEST: As Hideki Matsuyama and Russell Henley battled it out for the Sony Open title in Hawaii, Surrey’s Adam Svensson was one group in front of them registering a career-best performance on the PGA TOUR. Svensson closed with a three-under 67 and tied for seventh for his first PGA TOUR top 10. You can’t help but think there are many more of those to come for the former B.C. Amateur champion.
Svensson finished the event at 17-under par. That was six strokes behind Matsuyama, who beat Henley in a sudden-death playoff. Svensson, a three-time winner on the Korn Ferry Tour, earned the biggest cheque of his pro career: $227,813. He jumped to 79th from 144th in the FedEx Cup standings.

Svensson may also have found himself a new caddie. Tim Tucker, the former bagman for Bryson DeChambeau, had agreed to work the Sony and next week’s American Express tourney in southern California for Svensson. Given how well their debut went, don’t be surprised if it becomes a permanent partnership. “Obviously I was a little nervous, but I held it together,” Svensson said after his round. “I am excited for next week in Palm Springs. I am feeling really good with the putter. I just have to find something off the tee, but overall my game is pretty good.”

DESERT DEBUTS: The Abbotsford duo of Adam Hadwin and Nick Taylor will make their 2022 PGA TOUR debuts and join Svensson at this week’s American Express tourney in La Quinta, Calif. Fellow British Columbian Roger Sloan of Merritt, who missed the cut in Hawaii, is also in the field. Hadwin has had considerable success at The American Express tourney. In a four-year stretch beginning in 2016, Hadwin tied for sixth, was solo second, tied for third and tied for second. 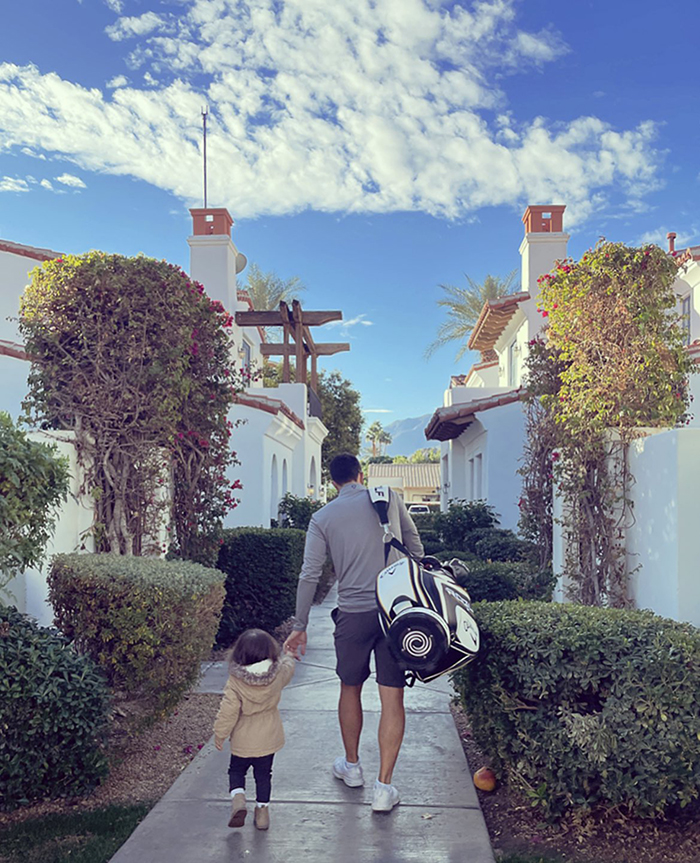 Adam Hadwin Heads To Work At The American Express Tourney In La Quinta, CA Accompanied By His Young Daughter Maddox

JUST MARRIED: Vancouver’s Stuart Macdonald is missing this week’s Korn Ferry Tour season-opener in the Bahamas, but he has a good reason. Macdonald and fiancee Carly Cramer recently got married and are finishing up their honeymoon. The pair met at Purdue University, where Macdonald played collegiate golf and Cramer played volleyball for the Boilermakers. Cramer recently resigned as an assistant coach of the University of Kentucky’s women’s volleyball team. Macdonald is expected to make his 2022 Korn Ferry debut at next week’s Great Abaco Classic at Baha Mar, the second of two straight events in the Bahamas.

TOP ASSISTANT: The Canadian Golf Superintendents Association has named Paul Davey of Cordova Bay Golf Course in Victoria as its assistant superintendent of the year. The award is presented to an individual who has contributed to his or her golf facility in a significant way and has demonstrated professionalism, leadership, innovation and a team approach. Davey, who has been at Cordova Bay since 2005, was nominated by Cordova Bay superintendent Dean Piller. “The value he brings to our organization is immeasurable and his contribution to our success goes far beyond his day-to-day duties,” Piller said. “He is the calming force that keeps the atmosphere in our workplace focused, calm and productive.”