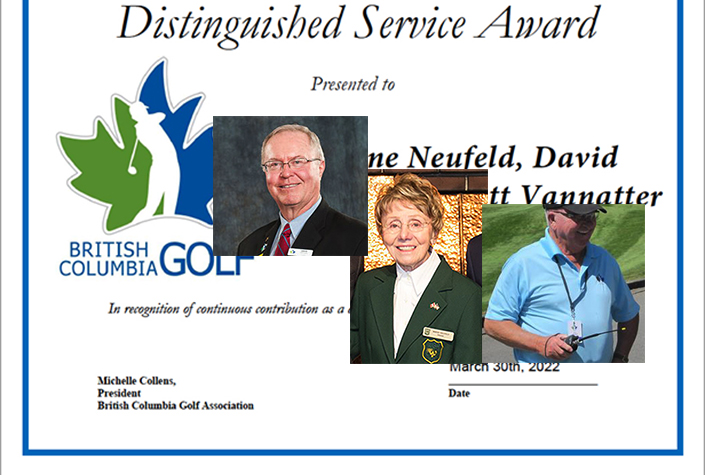 First as a high school teacher and then as the director of Victoria Golf Club’s Evans Scholarship program for caddies, Berne Neufeld has made changing the lives of young people a personal passion.

Neufeld is the reason the Evans program exists at Victoria Golf Club and her steadfast determination is why it has prospered. “Berne just took it upon herself to make it happen,” says John Bodenhamer, who is now chief championships officer with the United States Golf Association.

“She singlehandedly made it happen.”

Bodenhamer, the former executive director of the Pacific Northwest Golf Association, first met Neufeld when she was Victoria Golf Club’s representative to the PNGA and later served as president of its women’s division.

“She inspired us in Washington and Oregon with how hard she worked for those kids,” Bodenhamer says. “She cared deeply about every one of them. They were like family members and she was just incredibly organized. She never missed a beat and she saw that those kids did all the right things to virtually guarantee that they were going to get a scholarship.”

Neufeld, Scott Vannatter and David Atkinson are receiving Distinguished Service Awards from British Columbia Golf this spring in recognition of the volunteer work they have done to benefit the game.

Neufeld was taken aback when she received the call informing her about the award. “I was so shocked and I was near tears,” she says. “I was thinking, what did I do? I feel very humbled receiving this award.” The Evans Scholars Foundation was founded in 1930 with money donated by amateur golfer Charles (Chick) Evans. The foundation has helped more than 10,000 caddies graduate from college since 1930.

Victoria Golf Club has been involved with the program for the past 14 years and this spring Holly Stewart became the ninth teen to earn a scholarship. It is not a stretch to say these scholarships are life-changing. They include full tuition, room and board and are worth in excess of $120,000 US. All of the Evans scholars from Victoria Golf Club have gone on to study at the University of Washington in Seattle.

After getting the program started, Neufeld basically ran it. She interviewed prospective candidates and after they had been accepted she mentored them along the way. She got the membership to rally behind the program, which the club is justifiably proud of.

“Maybe her biggest contribution was finding the candidates and then mentoring them through the process because there is no doubt that the Evans Scholars that Victoria Golf Club has produced are just outstanding young people,” says British Columbia Golf’s chief executive officer Kris Jonasson. “There’s very few times in somebody’s life when they can make a life-long contribution to another individual and Berne has done just that.”

Neufeld, who recently stepped aside and turned the reins of the program to a committee at the club, says the program had a big impact on her life. “Well, I was allowed to continue to help kids because I had been a school teacher,” she says. “These kids were about the ages that I knew really well. I would fall in love with them because they are young people, they come here and some of them don’t know anything about golf.

"The first thing you have to do is make sure they are welcomed completely. We knew they had a lot of learning to do but we had excellent teachers in preparing them to go out and then when they were out on the course our members took over and they were fantastic with them.”

Scott Vannatter also had a passion for helping kids. Vannatter was a fixture at Zone 3 junior events, where he worked as a rules official. Vannatter, who died last September at age 83, was instrumental in developing the Player Development Trust Fund. The PDF is the charitable arm of British Columbia Golf and provides financial support for coaching and/or travel related expenses for underprivileged kids.

Vannatter served as the fund’s chair and organized garage sales to raise money for it. “He was a teacher and a counsellor in junior high so maybe that transferred over into his support of junior golf,” says his wife Eleanor. “He was passionate about the game, he liked junior golf and he also liked the rules. He was very committed.”

Eleanor Vannatter chuckled when she was asked about Scott’s garage sales. “It started small, but boy, oh boy they sure got big,” she says. “He would just ask clubs in Zone 3 if any of the players had clubs in their garages that they didn’t want to use anymore. They were really generous about donating their old clubs and then he would make a decision whether they would be good enough to sell.

“When I heard B.C. Golf was going to do this for Scott it made me feel very proud that he will be recognized. I just think it is wonderful.”

Brent Lindberg, a longtime volunteer with British Columbia Golf, nominated Vannatter for the Distinguished Service Award. “I started in 2005 and he was there long before I was,” Lindberg said.

“Scott never got excited on the golf course. He always remained very, very calm. One of the first events we worked together was at the inaugural B.C. Summer Games out at Ledgeview and I think that was one of my first events and he mentored me and was just a calming presence on the golf course because as a new rules official it can be kind of nerve-wracking. It was just nice to learn some of those subtleties from him because he was such a calm person and always joyful. He always had a smile on his face.”

David Atkinson is a past president of British Columbia Golf and jokes that he has been volunteering his services to the game since 1967. “That is a bit tongue in cheek because I caddied in the Canadian Open in 1967 when the boys didn’t bring their caddies,” Atkinson says.

“I was a private club brat at Scarborough Golf Club in Toronto. In those days the pro would come out of his office and point to a half dozen of us and say, ‘you want to carry a bag in the Canadian Open? Okay, be there next Monday and you’ll find out whose bag you’ve got.’ I was 17 then. I ended up carrying a bag for a guy named Kel Nagle from Australia. It turned out he had won the tournament three years before that.”

Atkinson was raised in a golfing family and played collegiate golf at Waterloo and Western Ontario before beginning a business career that took him all over the world. He settled for a time in a Vancouver about a decade ago and began doing volunteer work for British Columbia Golf, where Jonasson was keen to put Atkinson’s business expertise to work.

“I first ran into him when he was volunteering for the Vancouver Golf Tour,” Jonasson says. “He was on the governor’s council of Golf Canada and had been volunteering with them for a while. He came to my attention and I reached out and David became involved with our board. He joined our board when we did the last major restructure when we reduced the size of the board and elected the first president under that structure. He was our president for three years and past president for three years and was on the board of Golf Canada for a couple of years.”

Atkinson and his wife Jo-Anne recently relocated to Ontario. During his time on the west coast, Atkinson was a fixture at many of British Columbia Golf and Golf Canada championship events, often offering his booming (and bilingual) voice to introduce players on the first tee.

Asked why he has given so much of his time to the game, Atkinson says he has just tried to give back to a game that was so important to him growing up. “Well, I will express it this way,” he says. “The sport of golf has given so much to me over the years. And it has been the people in golf who continue to be the main reason for that. Both as a player and as a volunteer, I was welcomed, I felt welcomed. As a volunteer I was trained and mentored by the best in the game in my opinion.”

Atkinson continues to do considerable volunteer work with Golf Canada, where he was recently named a co-recipient of the 2021 Bruce Mitchell Volunteer of the Year Award. His Golf Canada duties this year include his role as golf tournament chair at the 2022 Canadian Summer Games in Niagara Falls. “It continues to be a great ride,” Atkinson says.

British Columbia Golf began its Distinguished Service Award program nearly 20 years ago and Jonasson sees it as a way of recognizing those who have made particularly significant contributions to the game.

“Any time that we recognize someone with a Distinguished Service Award it is because they have made a tremendous contribution to the sport,” he says. “These three individuals have all done that.”