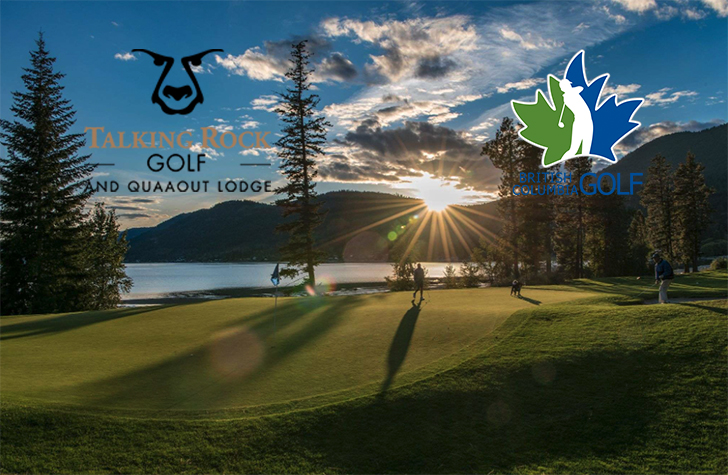 The start of British Columbia Golf’s championship season is just two months away and Chief Executive Officer Kris Jonasson is delighted with the courses that will play host to the events.

“We have an outstanding set of venues for our championships this year,” Jonasson says. “We’re really excited about where we are going.”

The season tees off May 16-19 with the Women’s and Men’s Mid-Amateur/Mid Master Championships at Talking Rock Golf Course in Chase. “We have been trying to go to Talking Rock for an event the last three years and we have been thwarted by the pandemic,” Jonasson says.

Talking Rock is one of two indigenous-owned and operated courses that will play host to B.C. Golf championships this season. The Junior Boys and Girls Championships will be played June 28-July 1 at Nk’Mip Canyon Desert Golf Course in Oliver.

“We are going to a couple of golf courses that are among the very best in our province and they are indigenous owned,” Jonasson says. “We’re thankful that we can support them and recognize just how good the golf is.”

This year’s championships are scheduled all over the province.

The Canadian Junior Boys Championship goes Aug. 7-10 at Rivershore Golf Links in Kamloops. “With the Canadian Amateur at Point Grey and Seymour this summer, it gave us an opportunity to take the B.C. Amateur to a more remote location,” Jonasson says. “Christina Lake is a fabulous golf course.”

Doug Hastie, manager of field operations and tournament director with British Columbia Golf, said he appreciates golf courses stepping up to play host to events during these busy times. “It’s very demanding for a facility to give up four to five days for a championship and we really appreciate the facilities that have stepped up,” Hastie says.

“Registration is open for all events and we anticipate good demand.”

SECURES STATUS: Coquitlam’s Henry Lee closed with a four-under 68 and earned what should be fairly decent conditional status at a PGA Tour Canada qualifying school in Alabama. Lee finished in a tie for 16th spot at eight-under par. For a time, it looked like Lee might sneak inside the top eight and earn full status through the first reshuffle of the upcoming PGA Tour Canada schedule. Lee was six under through 16 holes of his final round, but double-bogeyed the final hole. Four more PGA Tour Canada Q-schools are scheduled for this Spring, with the final one going April 26-29 at Crown Isle in Courtenay.

GOOD MEMORIES: British Columbia’s foursome of PGA TOUR regulars -- Adam Hadwin, Nick Taylor, Roger Sloan and Adam Svensson -- are all in the field for this week’s Valspar Championship at the Innisbrook Resort in Palm Harbor, Fla. Hadwin’s lone PGA TOUR win came at the 2017 Valspar Championship when he beat American Patrick Cantlay by one shot.

T-BIRD SWEEP: The UBC Thunderbirds swept the team titles and Sonja Tang won the women’s individual crown at the Vikes Spring Shootout played at Cordova Bay Golf Course in Victoria. The UBC women won by 20 shots with a 36-hole total of two-under par. Tang led a UBC sweep of the top five individual scores with a seven-under 139. The UBC men needed a sudden-death playoff to beat the University of Fraser Valley Cascades after both teams finished the event at 13-over par. Victoria’s Robin Conlan won the men’s individual title with a total score of five-under par.

SFU FOURTH: Simon Fraser University’s men's team placed fourth at the NNU Nighthawks Invitational in Livermore, Calif. SFU completed the 36-hole event with a team score of 18-over par. That was 10 shots behind the winning team from Cal State East Bay. SFU was led by Ryan Hodkins, who tied for seventh at one-over par.

WOMEN’S OPEN: The Vancouver Golf Tour used International Women’s Day last week to announce a new championship in collaboration with GolfBC. The B.C. Women’s Open will be held June 4-5 at Mayfair Lakes in Richmond. Registration for the event opens March 15. The VGT has also reached agreement with the Vancouver Park Board to hold the Vancouver Open at Fraserview, Langara and McCleery for the next three years. This year’s tournament runs Aug. 19-21.

SO CLOSE: Kimberley’s Jared du Toit just missed qualifying for the Corales Puntacana Championship, a PGA TOUR event that will be held opposite the World Golf Championships-Dell Technologies Match Play later this month. Du Toit shot a three-under 69 in a qualifier and ended up in a playoff with five other players for the final spot. Former PGA TOUR regular Brian Davis birdied the first playoff hole to gain entry into the Dominican Republic tourney.

YOUNG GUNS: Du Toit, Richmond’s Chris Crisologo and Stuart Macdonald of Vancouver are among 12 players selected to this year’s Golf Canada Young Pros Squad. All three players were also on last year’s squad. Macdonald also received a nice bonus. He and Maude-Aimee LeBlanc of Sherbrooke, Que., are co-recipients of the Emerging Professional Players of the Year Award. They will each receive $10,000. The award is provided by Andrew Cook, a trustee of the Golf Canada Foundation. Macdonald will be in action this week as the Korn Ferry Tour resumes after a month-long break with the Chitimacha Louisiana Open.

CLOSE CALL: Coquitlam’s A.J Ewart lost a sudden-death playoff to teammate Felipe Alvarez as the Barry University Buccaneers won the Panther Invitational in Melbourne, Fla. Both players finished the 54-hole event at eight-under par. Alvarez won the playoff on the first extra hole. Barry won the team event by 19 shots. Barry is currently ranked first by Golfstat in NCAA Division II and Ewart is the second-ranked player in Division II.