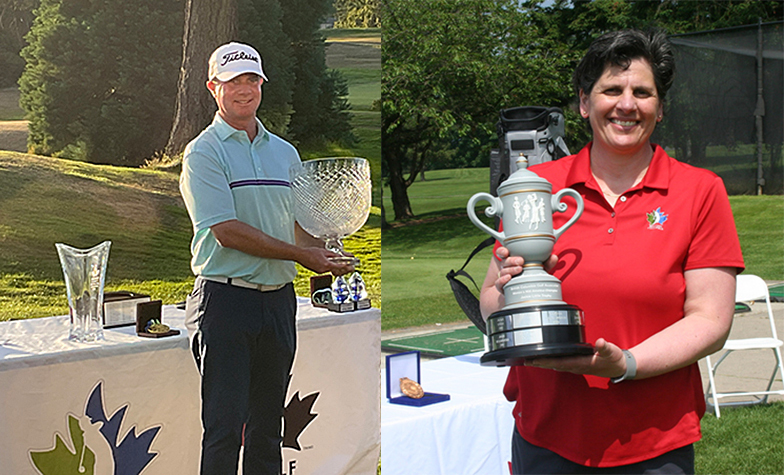 Kelowna’s Norm Bradley, a former B.C. Senior Men’s champion, considers it his good fortune to have played in nine of them. He’ll make his 10th appearance in early May when the Lamey Cup resumes after a two-year Covid-induced hiatus at Bellingham Golf & Country Club.

Bradley says the Lamey Cup has had a profound effect on his golfing life and credits it for making him a better player. “It’s been incredible,” Bradley says of his Lamey Cup experiences.

This year’s event will be played May 4-5 and features 12-member teams (eight men and four women) from each of the four associations. It’s a match play competition with four-ball and foursomes matches played on Day 1 and 12 singles matches contested on Day 2.

The competition was named the PNGA Cup for its first 13 years and renamed in honour of Dr. Lamey shortly before his death in 2019. Bradley sent an email to Lamey not long before his passing to thank him for creating the competition. “I told him that without this event I don’t think I would be half the competitive player that I am now,” Bradley says.

“This event has taught me so much, it has given me an opportunity to play against the best and to be able to understand what golf is all about in a competitive sense. I just thanked him for that. It’s sad that he has passed away, but the legacy of Jack Lamey is that he has created an event for amateurs in the Pacific Northwest to become better players. That is what it is all about. From participating in this event you become a better player, there’s no question.”

Victoria’s Craig Doell has played in all but one of the previous 14 Lamey Cup competitions and is once again on the B.C. team. Like Bradley, Doell has fond memories of his Lamey Cup experiences. “It has been a lot of fun,” says Doell, a former B.C. Mid-Amateur and Mid-Master champion. “It is such a unique team format. You don’t get a chance to play in a lot of golf team competitions, so to have that opportunity to play for B.C. is a nice honour. And it’s a fun format to play as a team because you have teammates to pull for and hopefully as a team you have success.”

Doell has particularly enjoyed what he called the special camaraderie of the event, where friendships have been forged with members of opposing teams. “You develop some great relationships and friendships through these team matches and that is part of why the event started, to build these regional friendships and alliances across Washington, Oregon, Idaho and B.C.,” Doell says. “I have created a lot of good friendships. Funnily enough, you run into people from these matches at other tournaments and develop a good bond and friendship.”

“I am really excited because I know we are playing against Oregon on the singles day and I am hoping to play Lara Tennant,” Stouffer says. “So I am pretty pumped about that.” B.C. has won the Lamey Cup on three occasions, but has not hoisted it since 2014. Bradley hopes that can change at Bellingham Golf & Country Club, a highly regarded old-school layout that he first played as a member of the Simon Fraser University Golf team.

Bradley has helped organize a Zoom call for members of the B.C. team that he hopes will galvanize the team. “I thought that rather than just showing up and not everyone knowing each other, we have the ability now to connect through Zoom. So I thought why not use Zoom to connect the whole team together. So at least we come together once before competition and get to know who we are and know a little about what the Lamey Cup is all about and know a little about what goes on in competition. I thought that would help.”

Live scoring will be available on the event portal under the Results & Team Standings tab. Click HERE

CHIP SHOTS: Washington won the last Lamey Cup when it was contested in 2019 at Crosswater Golf Course in Sunriver, Ore. . .Oregon has taken home the Lamey Cup seven times, British Columbia and Washington have won it three times and Idaho’s lone win came in 2017.