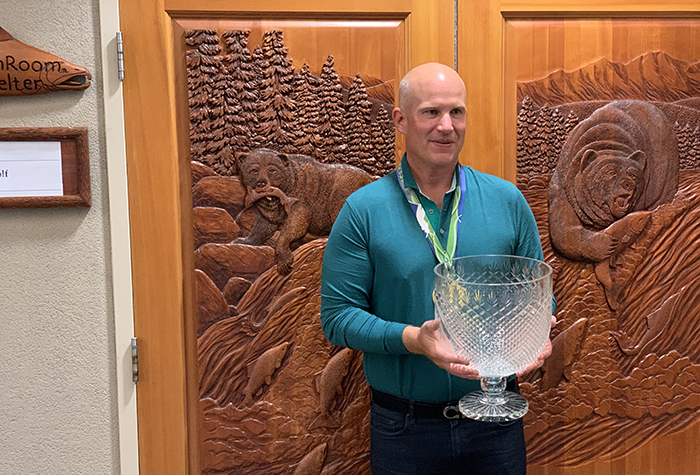 “This is amazing,” said Weeks. “I honestly can’t believe it is true. I have been second so many times -- last year at the B.C. Amateur, then I lost in a playoff at Big Sky in the Mid-Am in 2014. This is redemption. I was two shots back the last time the Mid-Am was here at Talking Rock (in 2015) and they called off the final round due to rain. So this is poetic justice.”

Weeks carded a two-under 70 in what was a roller-coaster of a final round. He shook off a double-bogey on the second hole with four straight birdies starting on the fifth hole.

“I found my stride,” Weeks said. “I just stayed patient. I made that double early in the round. But I bogeyed No. 1 a couple of times and it was like, okay, you have come back from that before already in the tournament so just stay patient.”

Weeks added three more birdies on the back nine. “I just focused on my breathing late in the round,” he said. “I have been doing some meditation lately and that has really helped my game.” His shot of the day came on the short par 4 17th hole, where he finessed a flop shot over a bunker to within four feet of the hole and then made the putt.

“No question the shot of the day was on 17,” Weeks said. “I was 40 yards away, it was a front pin and the only shot I had was the full swing flop. And it was downwind. I just nipped it perfectly.”

Still, he could not shake Pound, who also birdied 17 after his drive ended up on the back fringe. Weeks had a one-shot lead standing on the 18th tee and hit a solid drive on what is Talking Rock’s toughest hole. After watching Pound hit a solid approach inside 20 feet on 18, Weeks slightly tugged his second shot left of the green. He hit a nice chip to within three and a half feet, but pulled his putt and made bogey.

That forced the playoff, which began and ended on Talking Rock’s par 5 10th hole.

Both players hit big drives. Weeks followed up with a terrific three-wood that was on a perfect line. It ended up on the front fringe. Pound had about 230 yards left for his second shot and settled on a four-iron. “I hadn’t been hitting the hybrid that well and I really didn’t want to be long,” said Pound, who plays out of Rivershore Golf Links.

“Four-iron was never going to get there, especially with how wet it is and honestly we didn’t factor in the fact it had dropped so much temperature-wise. In hindsight, I probably would have hit a little more club.” Pound’s subsequent chip checked up quicker than he expected and came up eight or nine feet short.

Weeks putted from the front fringe and had just a tap-in for his birdie. Pound’s birdie attempt looked good, caught a piece of the hole, but did not drop. “I thought my chip was going to roll out a little bit more,” Pound said. “When I hit it, it was perfect contact. And with the putt, these greens are so hard to read. If they break a lot they are pretty easy, but if they are a little bit straighter you don’t really know what way it is going. As soon as I hit it, I thought it was a really good putt.

“But Patrick played unbelievable. He birdied five, six, seven and eight and missed a short one on nine for par and birdied 10 and 11. He had some great up and downs coming in. That shot on 17 was unbelievable. . .He made birdie to beat me. It was fun trying to chase him all day.”

Pound and Weeks finished 54 holes at one-over par. Both players closed with two-under 70s, which were the low rounds of the week. Weeks, a Vancouver realtor, also won the Mid-Master championship for players aged 40 and over. The B.C. Mid-Amateur is open to players aged 25 and over.

Weeks knew coming in that he had a good opportunity to win that elusive provincial championship. He had been tearing it up at Shaughnessy this spring. “I had 19 straight rounds under par at Shaughnessy so I was playing as a plus-seven off the white tees,” he said. “It has been the best stretch of casual golf I’ve ever had.”

Vancouver’s Andy Robb, who had a one-shot lead heading into the final round, finished third at three-over par. Ed Bellrose of Campbell River finished second in the Mid-Master Championship, while Kris Mattice of Kamloops was third.

A two-person better-ball competition was also held during the event. The team of Pound and Shawn Vanderwal of Kamloops won with a 54-hole score of 12-under. That was two shots better than another Kamloops duo of Taylor Callens and Mattice. Robb and Joshua Zhang of Vancouver were third at nine-under.

CHIP SHOT: The next event on the British Columbia Golf championship schedule is the B.C. Senior Women’s Championship, which goes May 30-June 1 at Fairwinds Golf Club in Nanoose Bay.